Where Are Global Economic Forces Pushing Gold and Silver Prices? 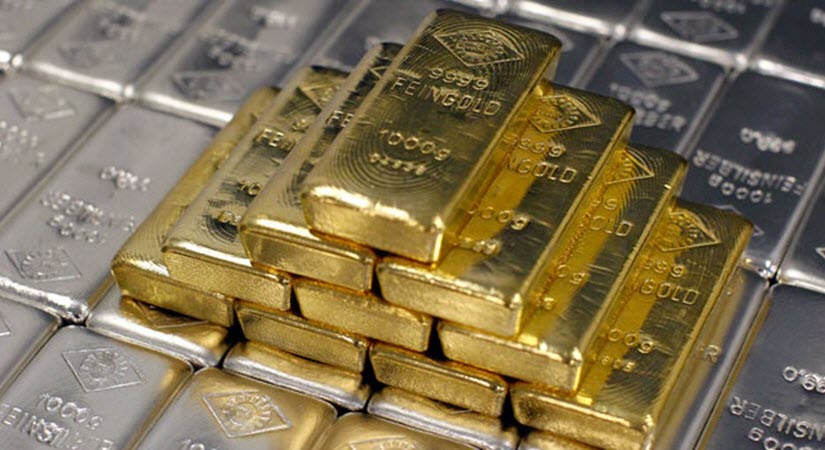 This week, Your News to Know rounds up the latest top stories involving gold and the overall economy. Stories include: What’s next for gold and silver, more parallels with the Great Recession, and investment demand for bullion is reaching new heights.

Gold and silver’s medium to long-term

Opinions on where gold is right now seem to differ. The $1,800 resistance seems hard to breach, but it feels as if a single hit to the system could send the metal flying past its recently-established $2,070 high. The $1,760 support itself is a massive upgrade over just two years prior, when gold was trending up slowly. Yet some still interpret what’s going on in the market as a lack of immediate interest.

Investing.com’s Andrew Lane states that a lack of volume in recent weeks could be attributed to banks trying to deal with their balance sheets before the Basel III agreement starts coming into greater effect in January. As we previously reported, under these new rules, banks are required to hold physical gold or other liquid assets for an amount equal to at least 85% of the value of “unallocated” gold on their books. Reducing banks’ 90-to-1 paper to physical gold ratio will become a necessity, even if it results in lower trading volume.

And while silver doesn’t fully come under the same regulations as gold, it’s known that the two assets sometimes move together, with silver often having more upside due to its greater volatility. Remember, too, silver’s performance depends much more on manufacturing demand than gold’s. For silver’s future, its present as the most undervalued asset for the last 30 to 40 years is telling enough when it comes to its future trajectory.

From there, it pays to examine current conditions of the global economy to see where the metals are headed.

Countries around the world are approaching stagflation, mostly having given up on the idea of paying off their debt. The Federal Reserve is in a position where raising interest rates by just a quarter of a point would bring on an additional $75 billion a month in debt service payments. It has also, to the surprise of few, gone back on its insistence that inflationary periods will be brief (even if they’re now avoiding the much-maligned adjective “transitory”). The new commodity cycle is underway, with virtually every commodity other than gold and silver reaching new peaks.

This mixture of factors tells Lane that we could be months away from a major move in both metals. Lane also notes that, due to their constraints, physical investment in precious metals is likely to emerge as a premium choice, in more ways than one.

Comparisons with the Great Recession linger; will gold prices follow their historical pattern?

Numismatic News’ Patrick A. Heller notes that the parallels with the current economic environment and the Great Recession from 2008 couldn’t be stronger.

The Great Recession was in turn compared with the Great Depression of the 1930s, as were the conditions last year. Heller points out that most people think that the Great Recession started in March 2008, but it had in fact already been building up steam since 2007.

It’s indeed a throwback to last year, when many were caught off-guard by both the crisis and gold’s outperformance. But gold had already been performing extremely well in 2019, with central banks slicing interest rates and blowing up their balance sheets. Heller’s own publication in March 2008 asked:

Desperate Moves By The Federal Reserve And Other Central Banks Force Investors To Ask –
Are We On The Brink Of Imminent Soaring Inflation?
Is The U.S. Dollar At A Risk Of Collapse?
Does The World Economy Face Worst Depression Since 1930s?

These are the same questions investors have been asking themselves since the beginning of the pandemic panic. This, along with the ongoing failure by the Federal Reserve and its collaborators to suppress gold and silver prices compared to 2008, tells quite a tale.

Despite a financial crisis clearly being underway in March, gold had to bottom out with a 28.7% price loss before moving on to what would eventually become the all-time high of $1,910 in 2011. Silver had an even worse correction, falling by 54.6% by October 2008.

To add even more familiarity, the fall in prices was followed by massive retail demand and shipping delays of bullion products. Heller speculates, based on  gold “only” being down 14% and silver down 23% from their August 2020 peaks, to the global economy being in a much worse state than it was in 2008.

Simply reading the writing on the wall tells Heller that gold and silver are now bottoming out before doubling in price. Heller thinks both metals could see their prices multiply several times over the next few years. One significant contributing factor will be the slow but undeniable unraveling of the Basel agreement.

Over just a few years, a $10,000 gold price forecast went from being considered absurd by most to only being seen as moderately bullish.

These numbers are hard to appreciate without a chart… 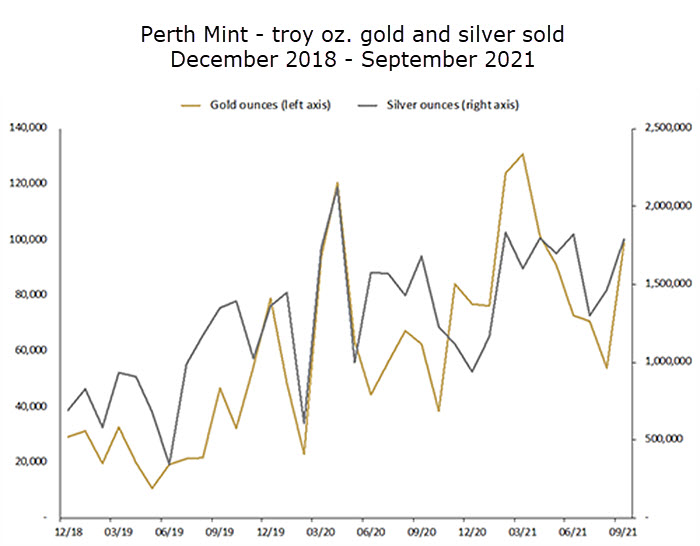 The silver market has had a notably different sales picture, though it nonetheless also notched a considerable increase in September compared to August. Sales of silver continued to climb after an approximated 1.6 million ounces sold in March until June, when they peaked at 1.8 million ounces.

After selling 1,302,723 ounces in July and 1,467,229 in August, the trend had reversed in the silver market as well. Perth Mint’s data shows that it sold 1,789,926 ounces of silver in September. The figure is now close to that of June, which marks the third-highest monthly silver sales figure dating back to February 2013.

Perth Mint’s sales numbers are of interest to all investors because Australia generally is such an important worldwide source of gold. And because Perth Mint specifically supplies “blanks,” the unstamped raw materials for precious metal coins, to a large number of mints worldwide. With this in mind, we can use Perth Mint’s sales figures as a proxy for investor interest in physical gold and silver; an interest which seems to be ramping back up to the levels we saw at the height of the pandemic panic.

General Manager of Minted Products Neil Vance said that the recent buying was spurred by dips in the spot price of both gold and silver. Perhaps he’s right. Or perhaps investors are souring on overvalued, paper-based assets and looking for inflation-resistant investments?