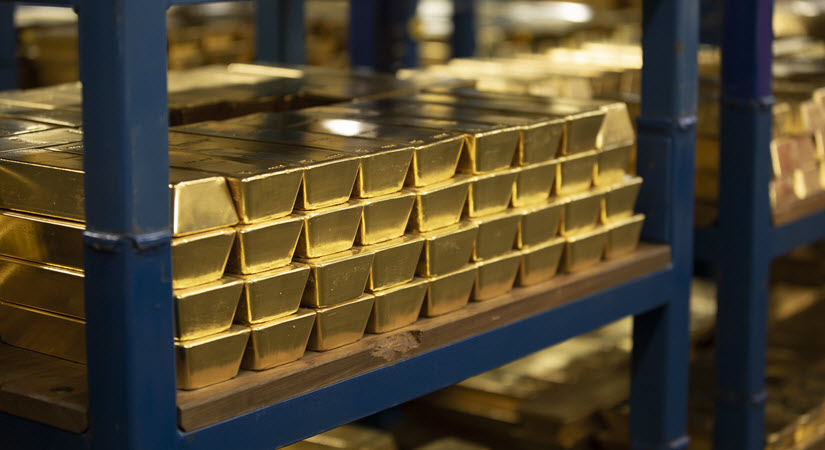 This week, Your News to Know rounds up the latest top stories involving gold and the overall economy. Stories include: UBS on gold’s “tried-and-tested insurance characteristics” continue to shine through; a case study in the economic benefits of a large hoard of gold; and should individual American states invest in gold?

Recently, CNBC’s Elliot Smith explored the resilience of gold’s price during the recent weeks of stock market volatility and the surge in Treasury yields. Typically, gold’s price levels are strongly affected by two forces — bond yields, and the dollar index.

Recently, both 10-year Treasury yields and the dollar index rose from multi-month lows. Historically speaking, a rise in Treasury yields has a negative impact on gold’s price. That’s because investors who want a safe haven for their funds generally prefer to receive interest payments. (One of the common complaints about gold as an investment is it doesn’t pay dividends or interest.) That complaint makes less sense in an economic environment where the U.S. 10-year Treasury bond pays a negative after-inflation yield.

The dollar index (DXY) is a different matter. The U.S. dollar index tracks the purchasing power or strength of the dollar against a weighted basket of six other currencies (euro, yen, pound sterling, Canadian dollar, Swedish krona and Swiss franc). When the dollar’s purchasing power declines, it takes more dollars to buy the same amount of gold, and vice versa.

The puzzle Smith is trying to solve is this: How can gold’s price be holding up so well when two of the strongest economic forces are pushing it down?

Bank of America strategists reported that investment flows into gold have been steady, despite rising Treasury yields and upticks in the dollar index. Why? According to their report:

There are significant dislocations buried beneath headline inflation, interest rates and currency moves, raising the appeal of holding the yellow metal in a portfolio and supporting our $1,925/oz average gold price forecast for 2022.

Note: the word “hedge” gets thrown around a lot by market analysts and investors. Investopedia defines a hedge as “an investment  that is made with the intention of reducing the risk of adverse price movements in an asset.” In other words, “Hedging is somewhat analogous to taking out an insurance policy.”

With that in mind, the following analysis from the UBS Chief Investment Office makes more sense. Strategists said that gold’s “tried-and-tested insurance characteristics” had again shined brightly, especially compared to other common portfolio diversifiers, including digital assets such as bitcoin. (Recently, bitcoin’s price has been more closely correlated with stocks than previously, reducing its effectiveness as a hedge.)

So what’s needed for gold’s price to climb higher? According to Russ Mould, investment director at British stockbroking platform AJ Bell, it wouldn’t take much. Loss of faith in central bank policies to fight inflation would do it (see Argentina, Turkey, Venezuela for examples). Alternatively, a recession could trigger a surge in gold prices:

As the combination of global debts and higher interest rates proves too much and policy makers have to return to cutting borrowing costs and adding to QE (quantitative easing) well before inflation is reined in.

So if the Fed stays behind the curve in the fight against inflation, or surrenders completely and returns to easy-money policies to support the stock market, Mould thinks gold could easily surpass its all-time highs.

The economic benefits of a large gold investment

This may seem like a strange way to talk about the benefits of gold investment, but Helman takes us through some very interesting points.

First, Russia has managed to almost completely separate its economy from the U.S. dollar:

Back in 2013 Russia received dollars for 95% of its exports to Brazil, India, South Africa and China. Today, according to the Congressional Research Service, after a decade of de-dollarization just 10% of that trade is in greenbacks.

That means Russia’s economic fate is almost completely divorced from the whims of the Federal Reserve and drops in the dollar’s purchasing power.

On the other side of the ledger, Russia simply hasn’t issued as many IOUs as the U.S. Helman informs us Russia’s total external debt is less than 30% of its GDP. In comparison, the U.S. ratio is over 100%.

Finally, Russia has built its own payment systems that enable international transactions not subject to U.S. sanctions.

This is an interesting case study in the benefits of transitioning away from a dollar-dependent economy to one based on gold. Just like an individual, a nation that avoids dealing in dollars, that builds up a robust gold investment and finds alternative ways of transacting funds has a lot more options – a lot more freedom of action – than those whose wealth waxes and wanes at the whim of the Federal Reserve.

To be clear, we do not condone Russia’s aggressive moves against Ukraine and their threats against former satellite nations in Eastern Europe. However, if Russia was still economically dependent on U.S. dollars, they simply wouldn’t have the freedom to make this (admittedly bad) choice.

U.S. states moving out of dollars, into precious metals

A recent op-ed in the Idaho Statesman pointed out some interesting economic changes in the U.S. A number of states have recently removed sales taxes on precious metals purchases. That makes sense. Most Americans buying gold and silver are doing so in an attempt to prevent inflation from destroying their purchasing power. In a sense, they’ve already paid taxes in the form of lost buying power. To charge them a tax penalty on top of inflation just adds insult to injury.

Even more interestingly, both Ohio and Texas have diversified their public pension funds with gold investments. A number of states, including New Hampshire, Oklahoma, Wyoming and Idaho, are considering legislation that would allow state treasurers to invest in gold and silver as a reserve asset.

Individual states like Idaho might want to invest in gold and silver for the same reasons an American family does:

Might we see a larger move by U.S. states to transition away from dollar-based holdings, into reserve assets with intrinsic value? That would be an extremely interesting development. How might the federal government respond to such a move?

This article closes with a rousing call-to-action:

It’s as prudent as ever to provide the Idaho State treasurer with options to hedge against the accelerating inflation that’s been foisted upon savers, wage-earners, retirees and the Gem State itself by short-sighted politicians and central bankers in Washington, D.C… Inflation is the match that threatens to set Idaho’s big pile of negative-yielding debt paper on fire.

This state-based move toward economic independence is an extremely interesting development. This is a story we’ll be watching in the months ahead.