Gold’s True Value Goes Beyond Its Price in Dollars 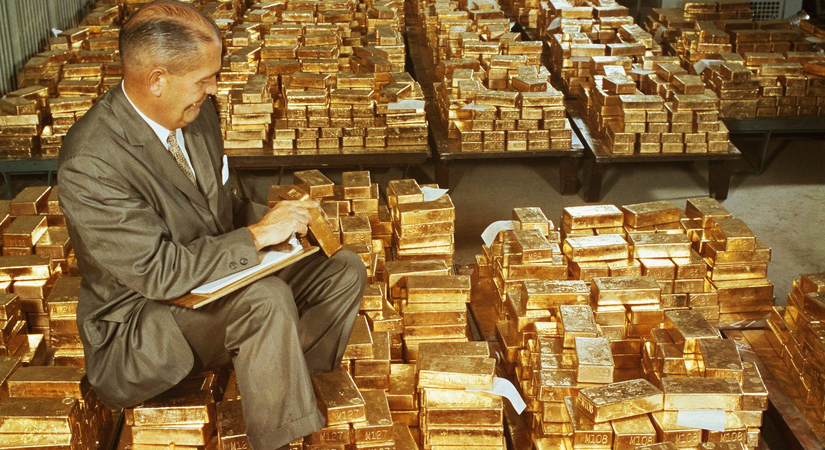 This week, Your News to Know rounds up the latest top stories involving gold and the overall economy. Stories include: Buying gold in 2022, Switzerland has its hands full, and the U.S. Mint appears to be slacking.

The case for gold: unchanged after 5,000 years

Having recently been pretty much the only asset in the green for the year so far, gold’s latest drop has seen it post a 7% year-to-date loss as it hit $1,675. Yet this could be one of the most deceptive periods of gold posting losses that we can think of. For starters, it’s really only posting these losses valued in s U.S. dollars, which has hit 20-year highs recently. As I’ve discussed before, these surges in the dollar’s value tend to be both brief and transitory.

Right now, the Federal Reserve is desperate to restore the dollar’s credibility as a stable store of value. That’s going to be quite a challenge, considering they printed $6 trillion within the last two years. The resulting 4-decade-high inflation has done more to damage the U.S. economy than anything other than, possibly, the pandemic panic.

We can get a global perspective by considering the world’s central bank currency reserves, and how their holdings of dollars have changed over time. Since the introduction of the euro in 1999, the dollar’s popularity among central banks worldwide has plunged 27%.

In other words, there’s a reason the Fed’s worried about the dollar’s status as a reliable store of value.

Consider, the dollar’s value relative to other units of measure (other currencies or commodities like gold) comes from the simple market forces of supply and demand. Given the massive increase in supply, clearly there’s more than compensating demand worldwide – which we call “dollar strength.”

Dollars are in demand right now, in a near-zero-interest-rate world, because Treasury bonds pay a yield greater than 0%. Today, that’s almost half as much as the current rate of inflation. Higher interest rates have, in the past, been correlated with stronger dollars. The dollar’s greatest strength in the last 50 years occurred in 1985, after four years of interest rates as high as 20%. (As a side note, today’s “strong” dollar is about 45% weaker than a 1985 dollar.)

Let’s consider how much higher interest rates will go before inflation is contained. Recent estimates based on the Taylor Rule peg the ideal inflation-fighting interest rate between 6-7%. We’ve already seen stock and bond markets crumble with rates at just 3% – just imagine how much worse it could be.

And were the Fed to actually hike rates to a level that’s sufficient to control inflation, could the U.S. afford to continue its trillion-dollar-a-year deficit spending?

Midas Letter’s James West accuses the Fed of “Orwellian doublespeak” due to, among many other things, constantly downplaying the threat of inflation and recession. How else can the U.S. Treasury keep selling new debt (not to mention rolling over old, unpaid debt into new bonds) with a straight face? Does anyone really expect those debts to be paid back?

As West puts it,

We’re forced to confront a reality where some assets, like U.S. dollars, are effectively infinite in quantity. Actually, all unbacked currencies are similar. The European Central Bank (ECB) can print infinity euro, the Bank of Japan can print infinity yen and so on. Dollar “strength” is only a matter of other currencies being weaker, depreciated faster by even more pathological central bankers.

If nothing else, the last few years have taught us that currencies are not a stable store of value. Any asset whose supply and demand is subject to such massive swings is the opposite of “stable.”

When looking for a safe place to store value, you want something that will retain its value in the face of any imaginable calamity. Short of a meteor destroying life on earth as we know it, gold does not need a market to retain its value. There are no historically verifiable reasons for gold to deteriorate in value.

This is the fundamental difference between a fiat currency – pegged to nothing, and limited only by the restraint or lack thereof by the central bankers who control its proliferation – and gold.

You simply cannot make more gold. And with the mineable inventory decreasing incrementally over time, its value – though not necessarily its price – rises commensurately.

In other words, West believes gold is nothing less and nothing more than the only safe haven asset that’s survived the test of time:

Gold is the only safe haven asset, and the monetary standard by which all currencies, extant and defunct, have been measured for at least 5,000 years.

Temporary dollar strength is a blessing for those of us seeking to get even more gold for the same number of dollars.

The first, if not the only question on everyone’s mind when word of sanctions on Russian gold got out was probably: how will that work? After all, bullion isn’t really sanctionable. That’s the reason Russia has been stockpiling it all this time to accumulate a gold hoard that some suspect might be near 12,000 tons.

Now, Swiss imports of Russian gold have hit their highest figure in over two years, with 5.7 tons of bullion worth roughly $320 million arriving in August. Unsurprisingly, investors seem to be looking for an obvious solution: smelt the gold and sell away. A fairly quick fix to look “politically correct” in the financial markets and still get their money’s worth. Though in reality, even bullion bars that have a “Mother Russia” stamp on them won’t exactly have trouble finding a home.

One country that hasn’t expressed a particular disinterest in buying gold since the war in Ukraine broke out is China. Gold withdrawals from the Shanghai Gold Exchange totaled 166 tons in August, a 3% monthly and 11% annual increase. In July, China imported more than 80 tons of gold from Switzerland, contributing to a total monthly figure of 178 tons. It’s a year-on-year increase of 111 tons and the highest July figure since 2017.

Is it a coincidence that Chinese gold imports are soaring during tales of cheap Russian gold as well as reports of avoiding sanctions related to Russia’s bullion? Maybe. Analysts say that China is stocking up for an annual period of high gold consumption. If nothing else, we’d have to imagine that they’re making good use of the recent price drop, too.

Even Congress is upset over the U.S. Mint’s silver shortages

What would it take for Congress to discuss relevant issues? How about the U.S. Mint ceasing to produce money? No, not the paper kind: the actual kind. If you’ve heard of shortages in the U.S. Mint, you know they’ve mostly refused to address them. Just a bit of a supply glut on the silver blank side, as they tell us.

Congressman Alex Mooney wants a “long-running showdown” with both the U.S. Mint and Treasury Secretary Janet Yellen, perhaps Wild West style, over a lack of silver bullion. With supply of American silver eagles plunging  in July to just half of last year’s figures, while demand remained high, Mooney elaborated on the issues U.S. bullion investors face:

This shortage in U.S. Mint production has apparently led to extremely high market-based premiums on Silver Eagles (as high as 70% over the silver melt value) – even as comparable items produced by other sovereign mints and private mints were not beset by such shortages or historically high premiums. The high costs resulting from the U.S. Mint production shortage directly harm U.S. citizens wishing to avail themselves of a U.S. legal tender means of protecting their financial security from the effects of inflation.

The questions he poses to Yellen and U.S. Mint Director Ventris C. Gibson can be summed up as follows:

We wonder too. Along with many others, I’ll eagerly wait for a reply – but I won’t get my hopes up. And in the meantime, I’ll keep my eye on the market for silver eagles.