Goldman Sachs Rushes to Buy Up One Precious Metal in 2022 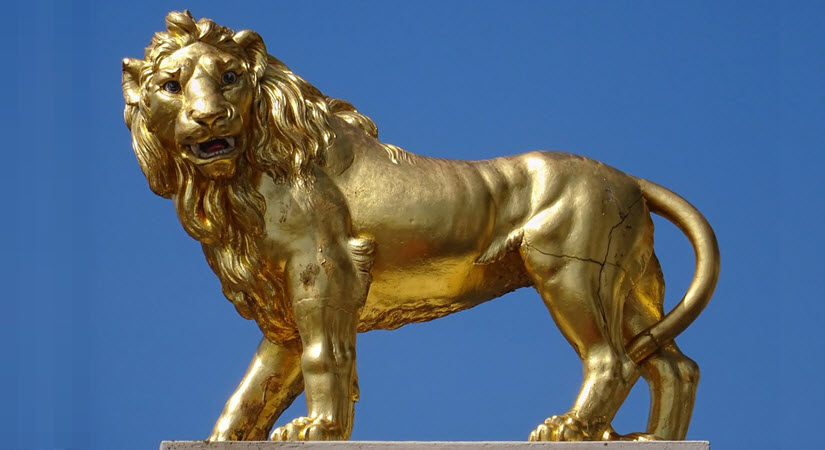 “Golden Lion Statue” by Maxwell Hamilton is licensed under CC BY 2.0.

This week, Your News to Know rounds up the latest top stories involving gold and the overall economy. Stories include: Goldman Sachs recommends buying “the defensive real asset” gold; Bridgewater Associates founder Ray Dalio recommends a greater allocation to gold; and the gold rush returns to California after a long hiatus.

Weaker U.S. growth and strong emerging markets are good for gold’s price. Today’s combination of growth and inflation is significantly different from last year’s. Slower growth and higher inflation in the U.S. are expected to generate significant investment demand for gold, a defensive inflation hedge.

“Gold rallies during rate hikes.” Contrary to expectations, Goldman analysts point out that gold’s price has held up well during recent increases in U.S. real interest rates. They ascribe this resilience to “gold’s status as both an inflation-hedging and a defensive asset.” They remind us that, historically, gold tends to rise during cycles of Federal Reserve interest-rate tightening.

“Gold is a hedge against bad inflation.” We’re not entirely sure there’s any such thing as good inflation…?

“Gold is the geopolitical hedge of last resort.” Geopolitical risk can be more loosely defined as “war” or war-like conditions. Analysts cite a few historic examples of these geopolitical risks, including the 9/11 terror attacks on the U.S. and the 2003 Gulf War. Crises like these that directly impact the U.S. economy drive gold’s price more than more isolated incidents that gave little-to-no direct impact, like the London 7/7 bombings or Russia’s annexation of Crimea. Considering the current state of tension between NATO and Russia on the Ukrainian border, this point is worth exploring further.

Goldman’s analysts concluded, after an extensive investigation, the following:

In our previous research we found that there is a large disparity in the gold price’s response to geopolitical shocks with strong price increases following 9/11 and the 2003 Gulf War and practically no response to the Crimea annexation in 2014. The common pattern we see is that geopolitical events with direct US involvement tend to have a much bigger positive effect on gold. This may be due to the fact that the U.S.D. itself often acts as safe haven when tensions arise in other parts of the world. But when the U.S. itself is affected, investors go into gold as a hedge of last resort. [emphasis added]

This chart summarizes their findings. You’ll note the obvious correlation between the potential impact to the U.S. economy and gold’s price rise. 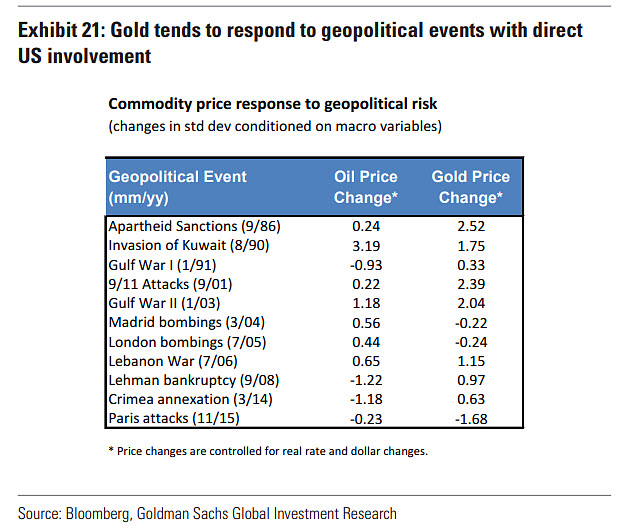 “Recession risk is a key barometer for investors’ gold preference.” Concerns of a U.S. recession are tightly correlated with gold demand. In other words, fear drives money out of riskier assets into gold, and when fear increases, so does gold demand.

In summary, Goldman’s analysts have officially recommended investors go long gold. Despite all the detailed analysis, their argument really comes down to the two most powerful forces in investing: fear and greed. Here’s why:

In our framework, two of the most important drivers of gold are ‘Fear‘ (a driver of investment demand) and ‘Wealth’ (a driver of EM purchasing power). While U.S. real rates are often a good barometer of Fear, during periods of monetary stimulus, their signaling power breaks in a late cycle environment. Instead, we find that in that environment the market’s assessment of recession risk becomes a better barometer of Fear. Based on the expected slowdown in the US economy and the increase in recession concerns… points to a gold price of $2,150/toz in 12 months’ time, which is now our new target. [emphasis added]

The entire analysis makes very interesting if somewhat tedious reading, possibly too technical for those without the patience to spend an afternoon squinting at charts. (We spend our time reading things like this so you don’t have to!)

Ray Dalio, co-founder and chief investment officer of world’s biggest hedge fund Bridgewater Associates, has a message for those of us saving for retirement. Even though the Federal Reserve has grudgingly admitted that price inflation is not in fact “transitory” and promised to raise interest rates, it won’t be enough. Today’s negative real yields on conservative investments, from savings accounts and CDs to 30-year Treasury bonds and nearly the entire corporate fixed-income universe, is here to stay.

The projected rate increases will not be adequate enough to make cash and bonds an attractive alternative, and neither will it be enough to curtail inflation. So, in relation to inflation there will still be negative returns in those assets even if there is a rate hike.

That’s a big problem because it means many traditional safe-haven investments are guaranteed losers. Dalio admits that’s a big concern: “As an investor I worry about cash and debt returning much less than inflation, and I would worry about not being well diversified.”

For example, Bridgewater has a 1-2% allocation to cryptocurrencies, but overall, the hedge fund sees more value in gold.

Dalio personally owns more gold than crypto, because he sees gold as a defensive asset that preserves purchasing power, while he considers cryptocurrencies a potential growth asset.

“I have a greater allocation towards gold, particularly in the portfolio designed to protect, and then there are inflation-indexed bonds and some other assets,” Dalio said. Learn more about inflation-resistant investments here.

The good news is, Dalio believes there’s still time to diversify with gold before the financial environment gets disastrous.

The gold rush returns to California

Califormia’s Idaho-Maryland Mine, abandoned in 1956 in the wake of the Bretton Woods Agreement to fix gold prices, may be opening once again.

As reported by Undark’s Becki Robins:

Now, with inflation rising and renewed economic uncertainty over the omicron variant of the coronavirus, demand for gold remains high, even despite some recent dips. In 2020, roughly 43 percent of gold consumed globally went towards exchange-traded funds and central banks. As prices have risen and mining technology has become more sophisticated, mines are opening and reopening in places where mining was once thought economically unfeasible.

According to the U.S. Geologic Service, approximately 20% of the world’s gold supply is still underground. Those gold veins are deeper, poorer and more expensive to explore. “The cost of mining is high,” says financial economist Dirk Baur. Much of the value of gold is tied up in the cost of just digging it out of the ground, he says. “There’s some profit for the mining company, but a big, big chunk is just an expense.”

Fortunately, modern technology has eliminated many of the negative environmental consequences historically associated with gold mining. Combining waste rock with cement and using it to backfill unused tunnels is one such technique that locks away potential pollutants and stabilizes the structure as well.

As gold investment demand continues to rise, the Idaho-Maryland Mine certainly won’t be the last gold mine returned to service after many quiet decades. If that’s the case, maybe we’ll see fewer of the U.S. Mint’s Out of stock messages in the future.