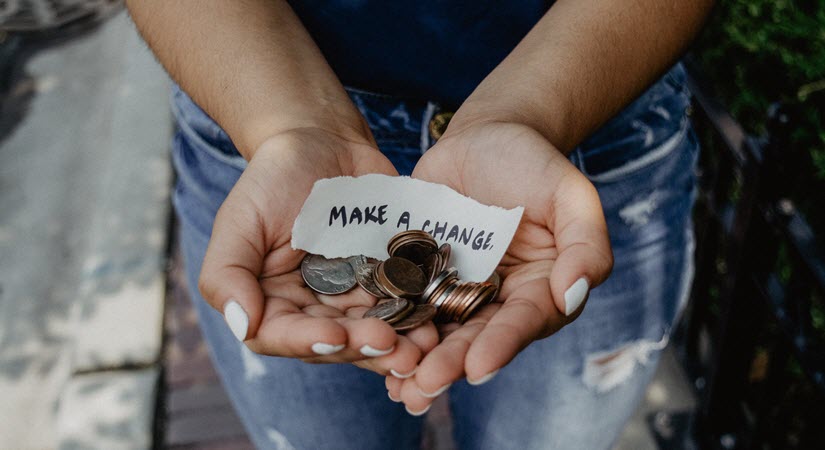 Since it isn’t likely that inflation will ease any time soon, we should prepare for “sticker shock” in the near future (unless you’re experiencing it already).

That’s because inflation robs you of buying power, stealthily, without actually changing the balance in your bank account. That’s true unless income rises faster than inflation. At least this preserves your buying power.

In another sense, though, we’ve already been robbed. A 7% pay raise should translate into 7% more buying power, 7% greater opportunities to experience the things you enjoy with your family. Or 7% more savings added to your nest egg.

If only that were the case.

The current inflation is still rising, and as of December 2021, the official inflation rate has accelerated to 7%. You can see the rapidly accelerating trendline during Biden’s first year as President reflected in the bar graph below:

It’s clear that America’s ongoing 40-year-record-high inflation will dominate the economic and political discussions for months, especially since Powell’s Fed has committed to hiking rates at least three times in 2022. Some analysts and market participants are anticipating four rate hikes.

That’s good news! At least that means the Fed is “taking it seriously” and expressing a willingness to do something to get food and gas prices under control. This process will likely take a while, though. Paul Volcker, the Chairman of the Federal Reserve who successfully defeated out-of-control inflation 40 years ago, needed four years to get the job done. During that time, Volcker had to raise the Fed funds rate to 20% in order to finally get the economy under control.

Were Powell to start today, right this minute, hiking rates four times per year at 0.25% each time (as all but forecast by the Fed themselves), he’d need 20 years to match Volcker’s feat. Nobody wants to wait that long, especially considering inflation already has a substantial head-start.

It’s like the old story about the tortoise and the hare… Powell’s slow-and-steady approach will, hopefully, eventually win the race. This isn’t shaping up to be a sprint, though. It’s a marathon.

Meantime, Americans are faced with rising prices. One traditional approach to countering economic pressure like this is pretty simple: put your head down, work harder and make more money.

That’s probably not going to work this time. Here’s why.

“That projected wage growth is faster than actual raises paid in the prior two years,” crows CNBC’s Greg Iacurci. Sounds like labor analysts were throwing a party!

U.S. companies are expecting to pay an average 3.4% raise to workers in 2022, according to a Willis Towers Watson survey. That growth would be higher than in 2020 and 2021 — and is expected across all types of positions, regardless of seniority.

In a sense, that is good news. More pay is definitely better than a pat on the back!

On the other hand, since overall prices are climbing at 7%, that 3.4% pay raise only covers about half the tab. The result still forces folks to make tough choices about how to spend their hard-earned dollars.

(Of course, this assumes someone got that 3.4% raise today… Six months, or a year from now, that same raise might only cover 1/3 of the tab, if not less.)

So the next time a politician tries to tell you to be grateful that your wages are going up or you can move to a new higher paying job, just remind him that the surge in the cost of living is outpacing wage gains, thanks to The Fed’s money-largesse and Congress’ lockdown policies and helicopter money have crushed the quality of life for millions.

Even the Bureau of Labor Statistics (BLS), the government agency that tracks inflation and employment, can’t sugar-coat this news. This BLS chart shows that the 12-month change in real (after-inflation) hourly earnings has dropped 2.4% in December 2021. (Worker pay hasn’t been “above water” since April of 2021: 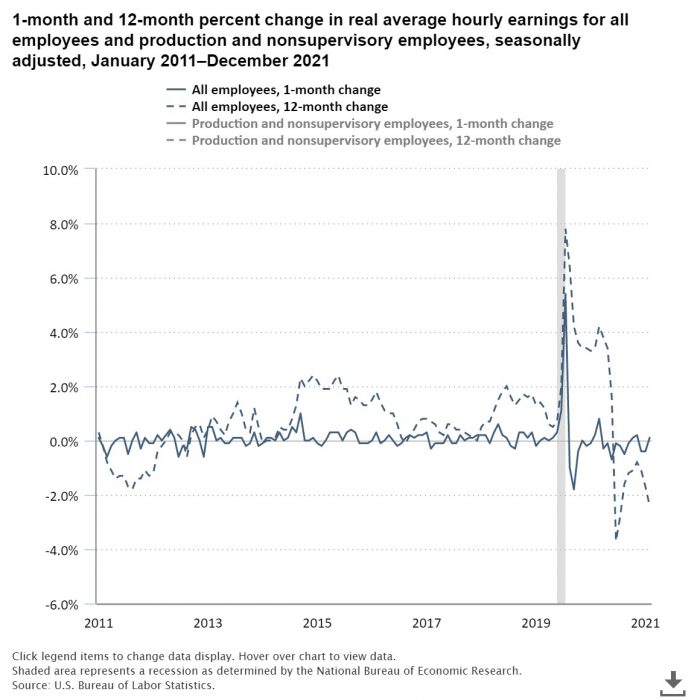 That means a huge portion of American workers need to go back to their retirement plans and look for ways to make more money, or a way to stop the bleeding.

Are traditional investments a way out?

The short answer is: “It doesn’t appear so.”

The longer answer comes from two places. First, John Hussman explained why future returns in the stock market might amount to table scraps:

We are fully convinced that these historic valuation extremes have removed decades of investment returns from the future, and strongly suspect that the Fed has amplified future downside risk as well. I believe investors have placed themselves in a position that is likely to be rewarded by a very long, interesting trip to nowhere over the coming 10-20 years. At worst, they may discover the hard way that a retreat merely to historically run-of-the-mill valuations really does imply a two-thirds loss in the S & P 500. [emphasis added]

In simple terms, an “overvalued” stock market means investors are overpaying for assets. In other words, they’re buying nickels for a dollar each.

Now, there’s always going to be someone to tell you that some nickels, even when priced at $1, are an incredibly great deal. After all, you might get lucky and end up with a $14,000 buffalo nickel, right? (Coincidentally, the folks who tell you this are usually selling nickels.) In a sense, this is a valid argument. However, the same kind of logic would also dictate we should “invest” our retirement savings in lottery tickets, because one of them’s a huge winner!

Prudent investors understand the difference between price and value. They know that a nickel with a $1 price tag is most likely going to be worth a nickel. They’re aware that, like casino gambling, lottery tickets have a negative return on investment.

A historically overvalued stock market pushes any meaningful returns decades into the future. The Fed’s easy-money policies have pushed valuations to dizzying extremes. The S&P 500 could collapse as much as 67% when the market returns to its historical average. Not good.

When stocks look too risky, where do investors turn? The fixed-income sector.

In the twisted world of the “everything bubble,” every Treasury bond from 5-year to 30-year has a negative real yield. In other words, buying a Treasury bond today locks in the privilege of losing purchasing power for the next 5-30 years.

Unbelievably, even the Treasury Inflation-Protected Securities (TIPS) bonds, whose promise is to preserve your purchasing power, well, is failing. According to Charles Schwab’s Collin Martin:

All TIPS yields are negative today.

Maybe it’s time to look outside the traditional investment choices for a safe haven?

One way to protect your savings against rising prices, overpriced stocks, bonds that aren’t producing, and tumbling wages is to consider diversifying your assets into a “safe haven.”

In investing, safe havens represent places or assets where you can park your money and have it maintain its value even while the rest of the market is struggling. When the economy falters or a financial crisis comes along, the desire to find safe havens becomes all-consuming for most people. For others with less risk appetite or more foresight, safe havens become core strategies to protect their earnings and weather uncertain futures long before crisis hits.

One traditional safe haven of choice: physical gold and silver. These tangible, intrinsically-valuable assets typically don’t lose their purchasing power from inflation. That makes them good stores of value, especially in an environment where the traditional alternatives seem to offer nothing but a guaranteed loss.

Prudent investors seek safe havens early rather than late. Because, when the inevitable economic crisis does occur, when the wheels come off and the sky is falling, desperate investors find themselves paying a premium for safe-haven assets like gold and silver.

“Gold is a way of going long on fear.”

Prudent investors know the right time to seek their safe haven is before fear and panic spread.