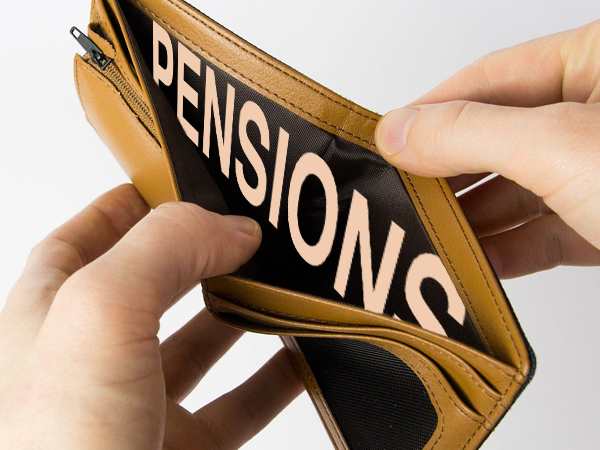 According to Pension Tracker, as of 2017 there is $5.184 trillion worth of market-based public pension debt across all 50 states.

The same Forbes piece highlights the four ways public pensions are funded as “deductions from an employee’s paycheck, contributions from the employer, investment earnings from the pension fund, and taxpayers.”

There are already risks currently present for taxpayers, and the map below highlights their dire debt situation:

According to data provided by Pension Tracker, 40% of U.S. States have at least $40,000 in market-based unfunded pension liabilities per household. The U.S. average is $28,807 per household.

In theory, increasing contributions and proper risk management should account for public pension shortfalls. In the real world, it doesn’t quite work out that way.

During sound economies, public pension programs can be made to “look good” through investment income. Public pensioners (including politicians) typically don’t feel the need to put money towards their pension “nest egg.”

Then markets crash or recessions happen, and the economic outlook isn’t so good. Investment income doesn’t flow into public pension programs, and once-positive returns go into the “red.” Most don’t see this because politicians use “sleight of hand” by reporting long-term earnings potential at rates of 7% or more.

The average assumed rate of return for public funds is 7.3%, according to a survey by the National Association of Retirement Administrators. Pensions rely on those returns to determine how much governments and their employees need to pay into the funds each year.

The illusion dissipates as soon as public pension programs fall short of expectations, but by then it’s too late.

Public Pension Corruption May Hit Taxpayers in the Pocket

Aside from states like Illinois and New Jersey with their desperate pension money grabs, corruption could potentially be the “train wreck” that ends public pensions altogether. And taxpayers won’t like the result, either.

One high-profile example is CalPERS. Charles Valdes, a former Chair for the investment committee that decides how pension funds are invested, was a fairly “unethical actor in the system.” City Journal reported (emphasis ours):

Valdes left the board in 2010 and now faces scrutiny for accepting gifts from another former board member, Alfred Villalobos—who, the state alleges, spent tens of thousands of dollars trying to influence how the fund invested its assets. Questioned by investigators about his dealings with Villalobos, Valdes invoked the Fifth Amendment 126 times.

Since board members benefit from having “plumped up” pensions, they looked the other way as Valdes did his job:

CalPERS’s members, who elect representatives to the fund’s board of directors, ignored concerns over Valdes’s suitability because they liked how he fought for those plusher benefits.

The fund has lost hundreds of millions of dollars in investments. It piled on huge amounts of public pension debt from lack of funding, and is weighing down state and local budgets.

If they get their way, CalPERS could potentially gain the benefit of some form of taxpayer bailout to “save” the program from doom. The impact from this could span multiple generations. It begs the question…

What other State-funded pension programs have similar “ethics”? The answer could impact taxpayers nationwide for quite a while.

Save Your Retirement From this Pension “Train Wreck”

It looks like public pensions are set to “run off the track,” but states aren’t going to just sit idle and wither out. It’s likely they’ll attempt extreme measures to recover losses.

As more state pensions go bust, you’ll need to do your own “retirement check up” and find ways to protect your hard earned savings. After all, you don’t want your wealth to be confiscated by some desperate lawmaker’s plan.

Start examining ways to protect your financial future when lawmakers begin deciding where your tax dollars are going. (Much like they did with the “bailout” after the last recession.)

A good place to start is by taking back control of your retirement.

Consider putting your financial assets where they can go to work for you, and not toward failing pension programs. Physical assets such as gold and silver are known for their growth potential and security during times of uncertainty. Just because pensions may be a train wreck doesn’t mean your retirement has to be on the same track.