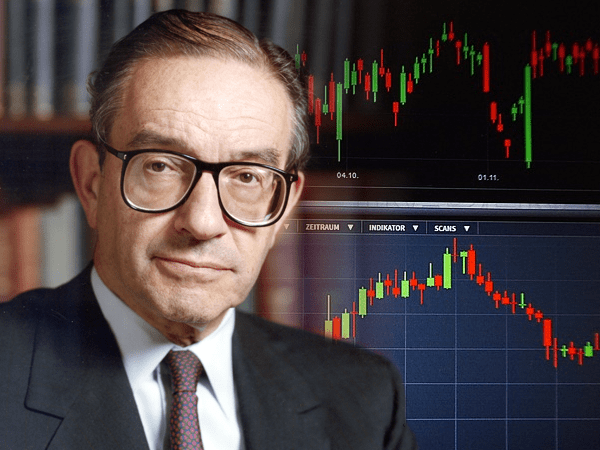 Speaking on Bloomberg Television, he said:

Experts are always making predictions about how the markets are going to go. However, when a former head of the Fed tells us his opinion, it’s best to pay attention.

Appointed by Ronald Reagan back in 1987, Alan Greenspan served as Chairman until 2006 — the second-longest tenure in the Fed’s history. He’s famous for labeling the frenzy which drove up stock prices during the dotcom bubble as “irrational exuberance”.

After warning about the stock bubble, he continued by saying the bond bubble would be the most critical. And, despite the Fed deciding not to hike rates during their meeting last Wednesday, he believes the move up in long-term interest rates will have a massive effect on the economy.

Greenspan believes that the ever-increasing government deficit is behind the current bubbles facing the markets. Expressing his concerns about the national debt and budget deficit, he claimed the federal debt to GDP ratio is so unsustainable, it’s becoming even greater now than it was during World War II. He says this will result in inflation and a rise in interest rates, warning:

Greenspan also revealed that he also doesn’t have much confidence in when this situation will be fixed, expressing surprise over many recent government proposals that don’t have any source of funding:

I think we’re getting to the point now where the breakout is going to be on the inflation upside. The only question is when.

He also pointed out that stagnant productivity levels, which haven’t improved much in the past 10 years, together with the dollar weakening against other currencies, are exacerbating the situation. He believes a downturn is around the corner, saying:

We are working our way towards stagflation.

Greenspan isn’t alone in his predictions. In an interview with The Telegraph, William White, former Chief Economist for the Bank for International Settlements (BIS), said he believes that we’re in an even more dangerous situation today than we were at the peak of the last bubble.

In his own words:

All the market indicators right now look very similar to what we saw before the Lehman crisis, but the lesson has somehow been forgotten.

These strong sentiments were also recently shared by respected economist Peter Schiff on his podcast, in which he said:

The impending economic collapse is hidden from most. People only see a rising stock market, not the negative underlying factors that will cause the whole system to crash.

Has the Crash Already Started?

With the stock market already selling off hard and fast earlier this week, and noted financial experts voicing their concerns, it’s no longer a matter of if, but when the next bubble will pop. In fact, the bubble may even be popping right now.

Fortunes were lost in the last bubble, as both businesses and private individuals went bankrupt. However, those who took notice of the subtle warnings and invested their money elsewhere before the crash made it through with their wealth intact.

It’s crucial to note that no other form of investment has stood the test of time quite like gold. And with the next crash looming, now is the time to protect your wealth before it’s wiped out.