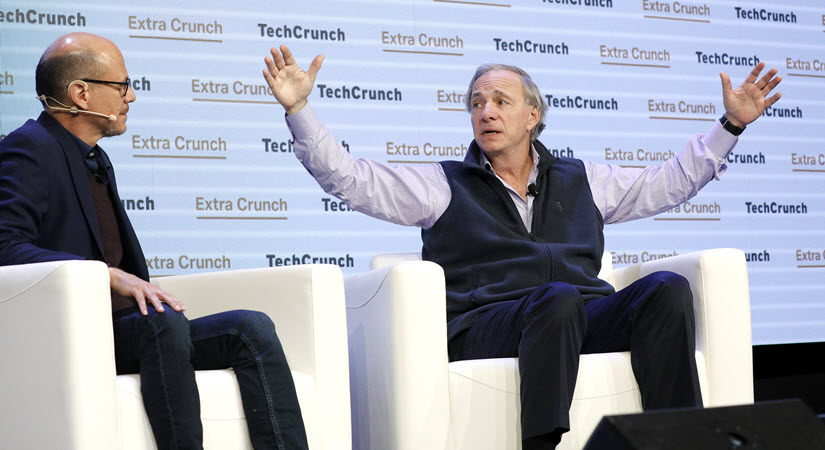 "How much gold are you going to need? Like, this much, at least..."
Image CC BY 2.0 courtesy of TechCrunch

This week, Your News to Know rounds up the latest top stories involving gold and the overall economy. Stories include: Bridgewater Associates CIO’s pro-gold outlook, the miserable effects of putting an end to the gold standard, and 4 reasons to buy gold’s current dip.

Rebecca Patterson, chief investment strategist at Bridgewater Associates (the world’s largest and most successful hedge fund), explained how the firm is bracing for a prolonged stagflationary period. Patterson revealed that institutional investors are bracing for the toxic economic combination of high inflation and slow or negative growth – and to protect themselves from “sustained bear markets.”

Just how severe an economic threat is this? Patterson minces no words:

Stagflation is going to kill you.

Fortunately, stagflation isn’t ensured at this point (just an extremely likely conclusion). The Federal Reserve may still be able to bring the U.S. economy out of a high-inflation environment without breaking it. Recession is inevitable, however.

Though she agrees with the consensus in most regards, Patterson doesn’t necessarily believe the Federal Reserve will make a policy U-turn. An awful lot of Wall Street observers may be expecting it, but Patterson said that a policy reversal would be far more damaging to the economy than the effects of ongoing tightening. Market watchers are paying close attention, she said, and such a dovish turn would ring loud the bells of economic weakness and a surrender to inflation.

This is a problem for the Fed. In order to actually begin to cool the economy, they must raise interest rates sufficiently to deflate the bubbles in stocks and housing. When investors double down by pushing those inflated asset prices higher, betting on an imminent U-turn by the Fed, it forces the Fed’s hand. Speculation must be countered by monetary tightening. Just like I said a few days back, when Wall Street fights the Fed, we all lose.

Although a Fed U-turn toward a “new normal” of double-digit inflation would be a best-case scenario for gold, Patterson doesn’t believe it’s required for gold to be an excellent safe haven asset. She expects gold to outperform just about every other asset class.

Like her clients, Patterson’s keeping a close eye on risk:

…stagflation is a real risk and people need to take a step back, look at their portfolios and say, “Do I have enough in my portfolio that if that scenario plays out, I’m not going to be vulnerable?”

What’s Patterson buying on behalf of Bridgewater’s clients? Gold, obviously. She believes gold at its current price is a bargain. Both China’s and India’s economies are slowly recovering their historic appetites for gold, and that growing Asian demand will send gold’s price higher in the near-term.

She expects domestic gold demand to rise, too:

People want gold as a hedge against inflation, to a degree, that’s not the only reason they buy it, but it’s a major one.

She also lists a very few assets she expects to post gains, such as securities correlated to inflation (like TIPS) and some undervalued international equities. (She expects both to underperform gold, though.)

Patterson says that, when analyzing gold’s performance, Bridgewater went back over a century to see how the metal has performed in similar stretches. Besides gold’s steadiness in yet another turbulent stretch, Patterson said investors can get used to persistent elevated inflation. This will remain an issue for several long-term, “structural” reasons.

The entire interview is worth your time to see how one of the most influential and powerful institutional investors on Wall Street is preparing her clients to endure an economic storm.

It appears that for every person attempting to outline how unpegging the U.S. dollar from gold ruined the financial state of things, there is one arguing the opposite. Even just the barest-bones data, which Murray Rothbard covers in his related book, What Has Government Done to Our Money? His conclusions don’t need interpretation.

More than 50 years after Nixon completely did away with gold as a tether to the U.S. dollar, we’re seeing the effects of free-floating money everywhere we look. Less purchasing power and more economic cycles happening in an overall weaker economy. The standard of living, however, took the biggest hit.

Single wage-earner households were common before 1970 – and these were middle-class families who lived well. These days, it’s become a sort of pipe dream and seemingly only reserved for the wealthy. This effect even goes in the face of all the technological advancements that were supposed to make our lives easier. Somehow, the average American still needs to work more than their 1950s and 1960s counterpart to buy life’s necessities. When it comes to things like homes or even cars, acquiring an asset without going into debt has become increasingly difficult to imagine.

The history of the gold standard in the U.S. is as depressing as it is expected: a tale of central bankers going to town on a nation’s financial prosperity. The Federal Reserve opened shop in 1913, and it wasn’t long before the idea of printing free dollars to fund World War I became difficult to resist. Things like sovereign debt and deficit spending weren’t nearly as feasible with a dollar peg around.

The U.S. dollar would soon find itself in a curious spot where it was gaining value in the 1980s, namely due to nominal interest rates that exceeded 20%. Despite restoring or re-establishing its role as the global reserve currency, the greenback has nonetheless suffered a massive fall, losing more than 99% of its purchasing power in less than a century.

The path towards currency devaluation seems not only set, but also a desired outcome among financial authorities. Now, with less tools to feasibly hike compared to the 1980s, we’re to wait and see if the world’s most popular currency can take an even bigger beating. Monthly inflation readings alone tell us that we’re in for yet another lesson on the dangers of free-floating money.

We only need to look to gold’s long-term chart to find reassurance, a point we often emphasize. In 1999, gold ceased its two-decade trend of lower highs and lower lows. It took off to the upside, and almost 23 years later, the latest trend shows no signals of slowing down.

On this long-term chart, Britain’s sale of its sovereign gold comes off as one of the most important events to have occurred. The European nation, despite being a known hub for gold trade, went on a multi-year gold sale that wasn’t mimicked by other nations and would prove to not be the soundest decision. When the selling started, gold was trading around $300.

The state of the global economy right now tells us plenty about why nations have instead opted to increase their sovereign gold hoard. Hecht lists 4 things that make gold a very attractive buy around $1,800: history, inflation, geopolitical turmoil and the Russian gold standard.

The first two hardly need an explanation, but certainly tie into the second two. It appears that both Russia and China’s relations with the West might be hitting a low point. Whatever one expects on the currency devaluation front, investors should always remember that gold remains the store of value during times of both peace and war.