“Herding Behavior” May Be Dangerously Inflating a Passive Investment Bubble 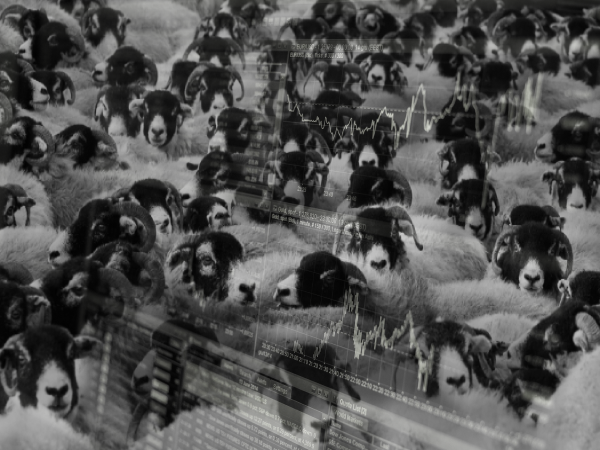 The Big Short, a 2015 Oscar-winning movie portraying the banking industry corruption of the markets prior to the Great Recession, featured the story of Michael Burry, who correctly predicted the market crash.

In recent weeks, Burry is predicting a new crash. In a lengthy email interview with Bloomberg, Burry shared some provocative thoughts about a “passive investment” bubble that he thinks is inflating to a dangerous level:

The recent flood of money into index funds has parallels with the pre-2008 bubble in collateralized debt obligations, the complex securities that almost destroyed the global financial system.

We’ve recently covered murky lending practices surrounding collateralized debt obligations (CDO’s), which Mr. Burry cites as the cause for the Great Recession. He draws parallels with this new bubble, and how it might turn out (emphasis ours):

… index fund inflows are now distorting prices for stocks and bonds in much the same way that CDO purchases did for subprime mortgages more than a decade ago. The flows will reverse at some point, he said, and “it will be ugly” when they do.

At the core of these passive investments is the fact that countless numbers of investors are practically blindly pouring money into them. Termed “herding behavior”, DoubleLine Capital CEO Jeffrey Gundlach is quoted in a CNBC piece saying that this behavior has reached “mania status.”

Burry explained the problem with the analogy of a “crowded theater” and only one exit:

Trillions of dollars in assets globally are indexed to these stocks… The theater keeps getting more crowded, but the exit door is the same as it always was. All this gets worse as you get into even less liquid equity and bond markets globally.

Still another CNBC piece reveals that passive investments have taken over at least half of the stock market.

Burry sums up the implications of this situation simply (emphasis ours):

This fundamental concept is the same one that resulted in the market meltdowns in 2008. However, I just don’t know what the timeline will be. Like most bubbles, the longer it goes on, the worse the crash will be.

Bring everything together, and Burry thinks this “herd mentality” investing in these passive assets is creating a trillion-dollar bubble that could pop at any time.

Greenspan Thinks the “Wealth Effect” May Put U.S. Into Recession

The same investing “herd mentality” that Michael Burry alluded to tends to cause people to spend more money as their assets rise in price, according to former Federal Reserve Chair Alan Greenspan.

Greenspan attributed it to something he called the “wealth effect”, a concept that suggests people spend more when the value of their assets rise, and he also thinks investors underestimate it:

We underestimate the wealth effect on the economy and this type of volatile stock market moves, it has an impact which I don’t think we fully understand nor measure correctly.

Greenspan thinks the uncertainty behind this “wealth effect” will determine how far the U.S. is headed into recession.

When the U.S. starts to “feel” the recession, there won’t be much time before the market catches up with that “feeling” (Greenspan said the economy has a “short lag”).

Greenspan added, “Gold prices have been surging recently because people are looking for ‘hard’ assets they know are going to have value down the road as the population ages.”

Avoiding the “herd” altogether may be the best way to stay out of the mess that could potentially happen in the near future.

One Way to Avoid the “Herd Mentality”

If the “herd mentality” is inflating a trillion-dollar passive investment bubble that may pop, it would be a good idea to reduce exposure to the assets the “herd” is investing in.

One way to do that is to consider shifting some assets into precious metals like gold and silver. They’re disdained by many in mainstream finance, and can be a great hedge if (or when) the bubble that these two men see coming does pop.