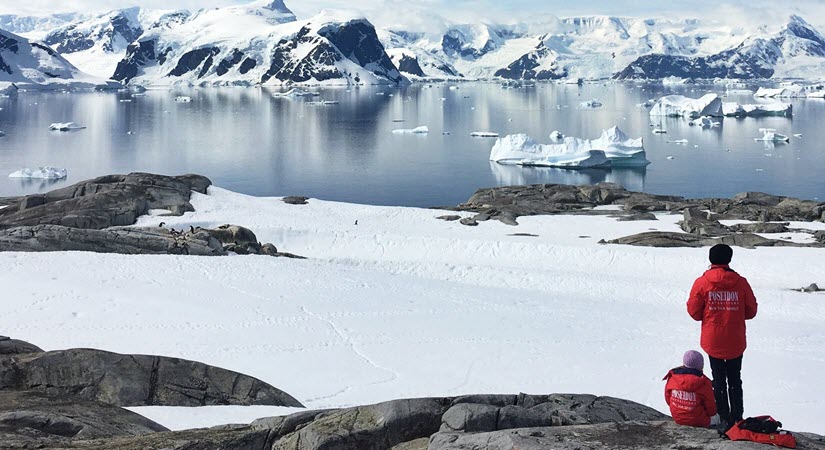 If we turn our attention to the method the government previously used to calculate inflation back in 1981, the story changes.

Today, Americans saving for retirement are facing an even steeper climb than before: 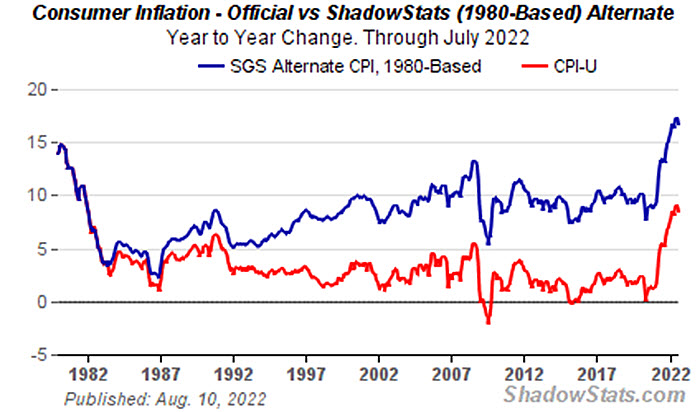 The good news, as I covered earlier this month, is that CPI declined 60 basis points in July this year. The bad news is, the majority of that decline came not from a general drop in prices, but rather from demand destruction caused by an economic slowdown.

While assembling my view of the current economic challenges, a couple of recent reports caught my eye. When we connect the dots, the picture that emerges indicates further unpleasantness ahead…

We’ve seen countless articles about the Great Resignation and a critical shortage of workers. CEOs and small business owners across the U.S. have responded to this labor shortfall by raising worker pay. That’s how basic market forces work, after all – when demand (for workers) increases beyond the available supply, prices go up.

When sufficiently widespread, this particular phenomenon is called a wage-price spiral. Here’s a working definition:

If you’re a visual thinker, this simple graphic might be helpful: 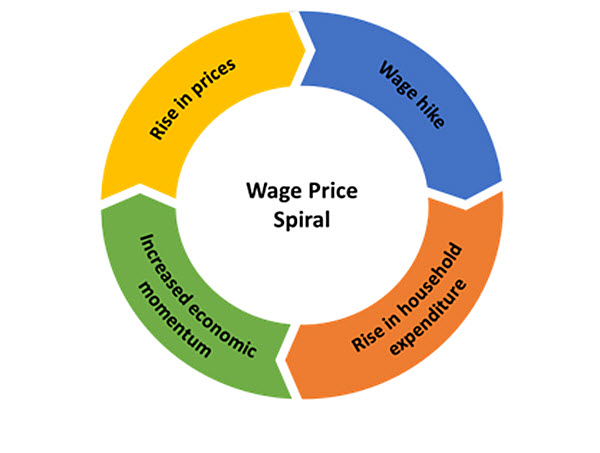 The reason it’s called a “spiral” rather than, say, “wage-price pressure” is because, as the graphic makes clear, this is a self-reinforcing feedback loop. (There’s a lot of high-level research on this subject, if you want to learn more.)

This recent report from the CFO Council summarized this development. As you might expect, chief financial officers (CFOs) are canaries in this particular coal mine. While headline CPI declined a bit, as we discussed above, CFOs and the Federal Reserve are more concerned by “the latest jobs report and wage growth data [which] remain hot.”

The worst-case scenario: the wage-price spiral that some economists have feared since inflation started taking hold over the economy becomes entrenched. We know the Fed is watching wage growth closely. But several top officials have said maintaining wage growth at a level that allows Americans to outpace inflation is the goal…

At the moment, wage growth is outpacing official inflation (wage growth was 10.25% year-over-year in June, and trending downward). Perhaps even more alarming, if we apply the 1980s inflation calculation methodology, inflation-adjusted paychecks simply aren’t keeping up with rising expenses.

Here’s why: Imagine you’re a salaried employee. When your expenses go up, you ask for a raise. It’s justified! Your standard of living is declining. You get the raise you ask for. Hooray! After a month or two, you realize your expenses are rising faster than your wages. So you ask for another raise…

Businesses, of course, pass on higher expenses to customers. As wages rise, prices follow suit – which drives wages up…

Meanwhile, prices of virtually everything surge. As just one example, it’s more expensive to raise a child than ever, according to a recent Wall Street Journal article:

The cost of raising a child through high school has risen to more than $300,000 because of inflation that is running close to a four-decade high, according to a Brookings Institution estimate.

That’s the wage-price spiral in a nutshell.

On the opposite side of the ledger, continued deficit spending by the Biden administration inflates the money supply and lowers purchasing power. The recent decision to cancel some student loan debt, for example, will add approximately $244 billion to the U.S. national debt.

Since there’s no legal limit to the amount of debt the U.S. can issue, theoretically there’s no limit on the number of dollars our government can print… (This is exactly how virtually every unbacked currency in world history has collapsed.)

As rough as things are here in the U.S., we should count our blessings.

The last time the U.K. experienced inflation running this hot was 1976 (46 years ago – sound familiar?)

The combination of economic sanctions on Russia, the obvious result of surging energy prices and money-printing appear to be the primary drivers of the dramatic inflationary pressures. Pretty much the same as everywhere else.

The UK and the Eurozone are facing an additional challenge, though — additional strain on regional supply chains caused by historic drought. In this case, “historic” means possibly “the worst drought in 1,200 years.”

Severe droughts across the Northern Hemisphere—stretching from the farms of California to waterways in Europe and China—are further snarling supply chains and driving up the prices of food and energy, adding pressure to a global trade system already under stress.

Regional transport of bulk goods like food and other commodities via waterway has nearly ground to a halt across Europe. Hydroelectric power generation has halted across China, leaving thousands of factories sitting dark. Water-cooled nuclear reactors in France have lowered their power output as the rivers that absorb waste heat have shrunk to mere trickles of mud.

Water for agriculture? U.S. cotton farmers expect to lose more than 40% of their harvest, and Italy’s olive oil output will drop by 1/3.

Keep in mind, these global inflationary pressures have real world effects on hard-working citizens, no matter where they live.

Bottom line, the global economic situation is bad, the outlook is grim, and thinks will almost certainly get worse before they get better. How bad? We don’t know.

For how long? Again, no idea.

You can’t fix the global economy, but you can stabilize your personal economy

No matter how bad the economic situation gets in the U.S. or across the globe, one thing is certain. You can’t do much about it.

At this point, some readers will throw their hands up and say, “The world is on fire, might as well roast some marshmallows.” They’ll hit the back button and go watch sports or surf TikTok until they forget about what they’ve just learned.

Prudent Americans like you, who accept responsibility for their own financial futures, who don’t ignore news they don’t like, should take a moment. Is your own “economic situation” stable enough to withstand the current U.S. outlook? If our situation deteriorates and we see UK levels of inflation next year, would your finances collapse?

Right now is a good time to ensure your retirement plan will have the best chance of enduring today’s historic inflation (even if it gets worse!) and the looming recession. Remember, your plan should take into account normal business cycles as well as the likelihood of crisis. It’s never a bad idea to make sure your investments are diversified properly, in line with your goals and risk tolerance. Proper diversification can help lower volatility and decrease losses while maximizing potential gains.

During gloomy economic times like these, physical precious metals like gold and silver have been considered safe haven investments for centuries. That’s because they offer a surprising array of benefits to your savings – and can add the stability and peace-of-mind you need to face an otherwise uncertain financial future with equanimity.