How Surging Bank Deposits May Collapse the U.S. Dollar 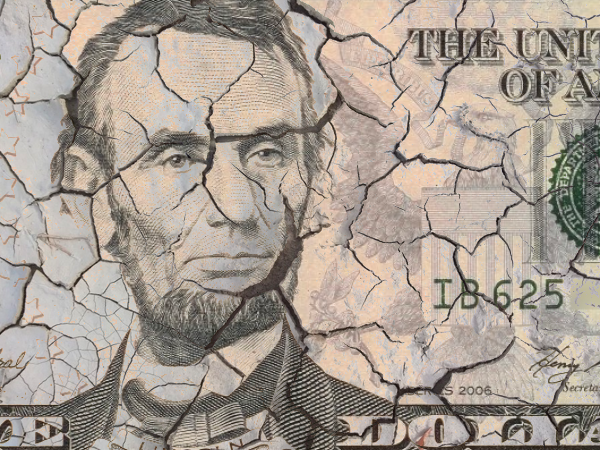 In another episode of “Strange 2020”, banks have become flush with deposits. But not in the way you might expect.

According to CNBC, “A record $2 trillion surge in cash has hit the deposit accounts of U.S. banks since the coronavirus first struck the U.S. in January.”

In one month, deposits grew by $865 billion, which beat the record for an entire year.

You can see the incredible jump in deposits in the official chart below, starting as the pandemic hit earlier this year:

When you see such a large deviation from the norm, you don’t have to have a degree in economics to suspect something is fishy. According to CNBC, the Fed appears to be partly responsible for this anomaly:

The Federal Reserve began a barrage of efforts to support financial markets, including an unlimited bond-buying program. And an uncertain future prompted decision-makers, from two-person households to global corporations, to hoard cash.

Fox Business notes, “About two-thirds of the [$2 trillion in deposits] flowed to the nation’s biggest banks.” So if $1.34 trillion in deposits flowed from retail, asset managers, government programs like the Paycheck Protection Program, and big company lines of credit over the last five months or so, and only to big banks… that should raise suspicion.

Crash of the U.S. Dollar Could Be “Inevitable”

The U.S. dollar may be headed for trouble in the near future, and the CNBC piece finishes with one possible reason why:

A lot of banks are saying, “There’s frankly not much we can do with it right now”… They have more deposits than they know what to do with.

If banks have trillions of dollars, but there isn’t anywhere for that money to go, that has a number of potential outcomes.

This includes a crash of the dollar that might be coupled with a major inflationary period.

Former Morgan Stanley Chairman Stephen Roach is warning of a potential 35% drop in the dollar:

The U.S. economy has been afflicted with some significant macro imbalances for a long time, namely a very low domestic savings rate and a chronic current account deficit… The dollar is going to fall very, very sharply.

According to the CNBC article, “[Roach is] concerned a crash could spark a late 1970s-type stagflation crisis, when prices rose sharply while economic growth was muted.”

He pointed to the U.S.’s turn away from globalism as an influencing factor, and that a dollar crash could also happen alongside stagflation.

Neither is good for purchasing power. Both together could spell disaster.

Who Knows What the Next Economic “Storm” Will Bring?

If the economic impacts from government shutdowns are leading toward stagflation, along with a weakening dollar, who is going to foot the bill? The short answer is you: consumers, renters and buyers.

And it remains to be seen if that bill could even be paid.

So now is a good time to shore up your retirement savings and make sure it can weather any potential storm.