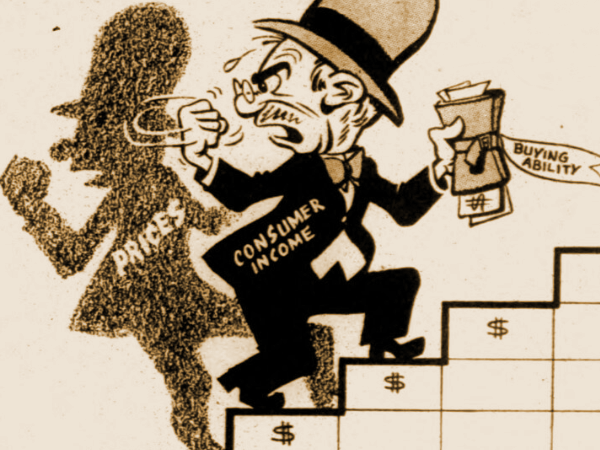 Social Security recipients are on track for a cost of living adjustment (COLA) this year of a mere 1.6-1.7%.

That’s according to Sean Williams at The Motley Fool, who analyzed data available so far this year. Once data for August and September are available from the Bureau of Labor and Statistics, the official COLA for 2020 will be announced on October 10.

Williams claims that three “external factors could provide a boost to the COLA that beneficiaries will receive next year.”

Let’s touch on those factors, along with how they could increase the COLA, and add a few specifics that may provide more clarity.

FACTOR #1 – Hurricane: Depending on where a hurricane makes landfall, the energy industry could take a brutal hit. One example would be if a hurricane damages any oil drilling rigs in the Gulf of Mexico. That could “raise crude prices, which ultimately sends gasoline prices higher,” according to Williams.

If energy inflation rises, the official consumer price index (CPI-W) the Social Security Administration uses would also increase, which in turn could increase the COLA.

The Atlantic Hurricane Season still has one month to go, with the potential for more hurricanes to develop in October.

FACTOR #2 – U.S.-China Trade War: If the current “tit for tat” trade war with China doesn’t resolve, prices that U.S. consumers pay for common items could rise even further than they already have.

Of course, the trade war still has the potential to escalate further, which could spike prices faster. Some of these prices are factored into the CPI-W, so that could also give retirees a bigger raise.

FACTOR #3 – Dovish Fed: Williams wrote, “At the end of July, the Fed lowered interest rates for the first time in more than 10 years after a stretch of increasing the federal funds rates for a period of three years.”

The Fed lowered their rates again in September, indicating the possibility of a dovish trend. Williams explained the potential effect like this:

“Lower lending rates have a habit of encouraging businesses and consumers to spend more since the cost to borrow money declines” which “can have a positive impact on economic growth and business pricing power.”

The increased pricing power “should be reflected in the CPI-W as a higher reading,” according to Williams. And according to Kiplinger, there is at least one more Fed rate cut in store for 2019.

But even if these three factors align in such a way that Social Security recipients get a boost to their COLA, it may not matter much.

“Real” Inflation Could Absorb Any COLA that Retirees Get

The COLA is supposed to help account for the cost of rising inflation. But what if inflation were higher than what is officially being reported?

According to official sources, the “US annual inflation rate fell to 1.7 percent in August 2019 from 1.8 percent in the previous month and below market consensus of 1.8 percent, as food prices and a range of other goods continued to increase while energy deflation deepened sharply.” (bolding ours)

You can see this reflected in the official BLS graph: 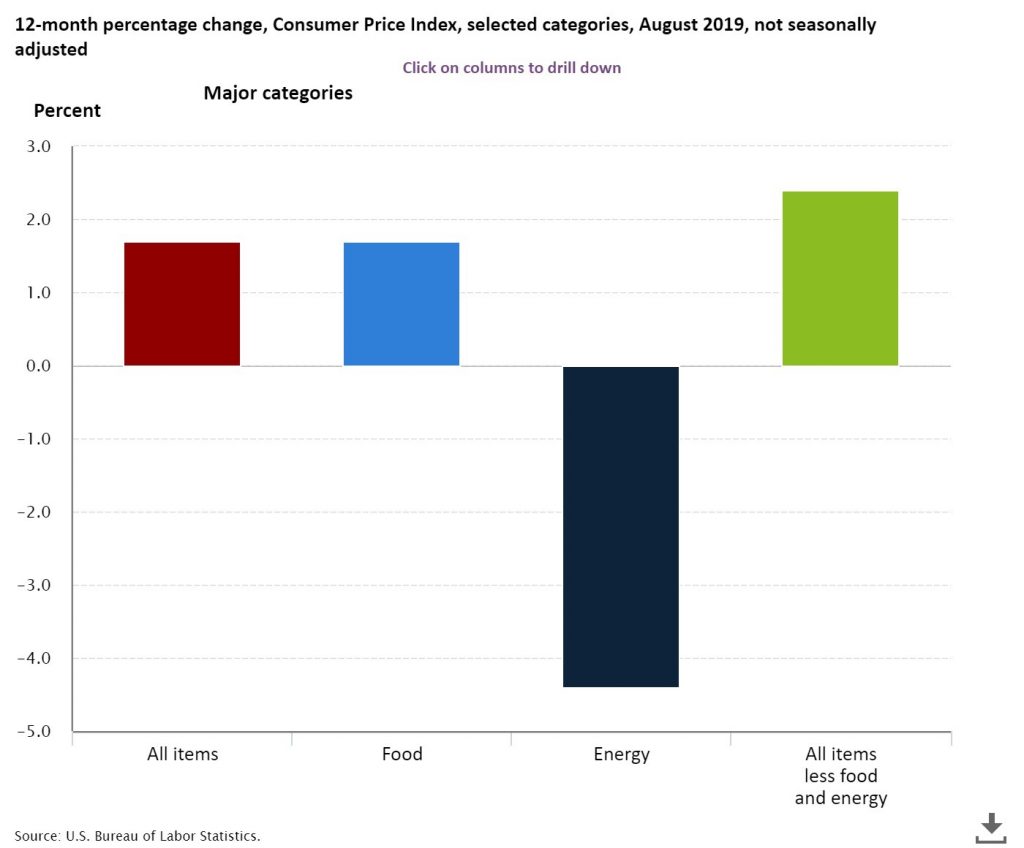 Taken at face value, it may seem like inflation isn’t that high, even though it’s still in a rising trend and “projected to trend around 1.90 percent in 2020.”

But then there’s “real” inflation, which according to ShadowStats is “a measure of the cost of living needed to maintain a constant standard of living.”

Using methodology that was being used in 1990, you can see what “real” inflation should look like in this chart from ShadowStats: 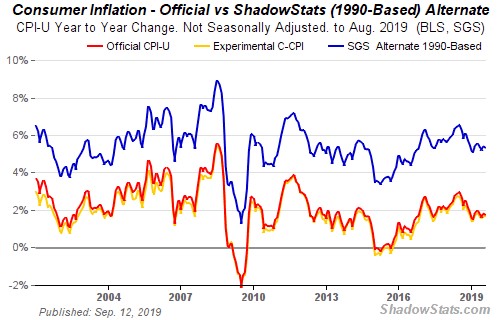 With “real” inflation hovering close to 5.5% as compared with only 1.7% from official sources, retirees may have a bigger bite taken out of their next COLA than they realize. And any COLA adjustment could be quickly outpaced by actual real-world inflation.

Make Your Retirement as Resilient as Possible to Inflation

Price inflation will continue to pose challenges to the ability to retire on Social Security and savings alone. (Social Security is only intended to pay about 40% of your retirement anyway.)

Worse, no matter what the official COLA turns out to be, it may not be enough to keep up with actual inflation.

They can act as hedges against inflation. When prices begin to soar, you’ll want an investment that can help you maintain the lifestyle you worked so hard for.