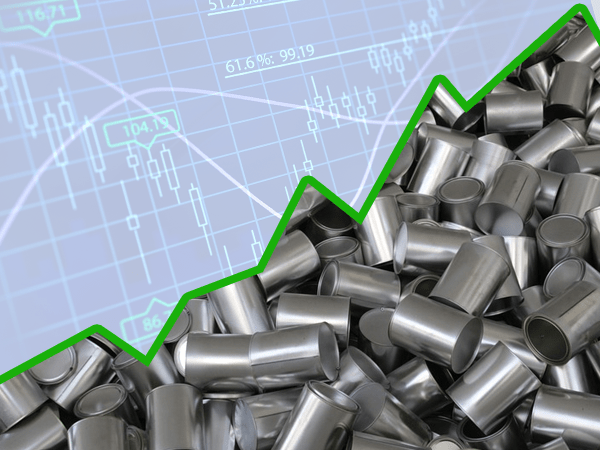 Last week, President Trump announced his plan to impose a 25 percent tariff on steel imports and a 10 percent tariff on aluminum imports. These tariffs would be applied to all foreign countries equally, although Trump has suggested exemptions for Canada and Mexico if they come to agreement on a new NAFTA deal.

We have large trade deficits with Mexico and Canada. NAFTA, which is under renegotiation right now, has been a bad deal for U.S.A. Massive relocation of companies & jobs. Tariffs on Steel and Aluminum will only come off if new & fair NAFTA agreement is signed. Also, Canada must..

It’s been a few years since the U.S. had any significant tariffs in place. What could be the potential impacts of this new move?

How Do Tariffs Impact Prices?

Tariffs on steel and aluminum will cause increased costs for products made with those imported materials such as cars and cans.

If a car manufacturer has been using imported steel to build its cars, their costs will rise regardless of whether they continue using imported steel or switch to American-made steel. This additional cost is typically passed onto the consumer in the form of higher retail prices.

An article published on Quartz says (emphasis ours):

…there’s a risk that consumer prices will start to rise. Right now, any sign of inflation appears to be bad for markets. It fuels fears that central banks around the globe will raise rates faster, heralding the end of the easy-money environment that’s fueled the economy in the past few years.

The impact of rising prices could wind up hurting other producers—even ones that don’t use steel or aluminum at all—as the effects eat into household spending. The additional money US consumers will have to shell out to buy American cans and other goods will eat into their spending on other goods, domestic and imported alike.

The idea that interest rates could rise faster due to a steel tariff may not seem logical on the surface. But tariffs do increase prices, which could be reflected in the inflation numbers. And if the Federal Reserve sees inflation rising, they could react by increasing interest rates faster.

But experts are less concerned with increased prices than they are with what could potentially turn into a trade war in which other countries levy tariffs on U.S. exports. This is possibly why Paul Ryan expressed his concerns, saying through his spokeswoman AshLee Strong:

We are extremely worried about the consequences of a trade war and are urging the White House to not advance with this plan. The new tax reform law has boosted the economy and we certainly don’t want to jeopardize those gains.

So if tariffs cause a general increase in prices…

What Happens During a Trade War?

As you can imagine, this retaliatory behavior could quickly escalate into a situation where countries trade blows with each other as they seek to inflict maximum economic damage on each other. Alvaro Vargas Llosa writes:

This is exactly how trade wars work. You take the first shot, then someone retaliates where it hurts you the most. Next you double down because you cannot afford to seem intimidated by foreigners. Then one day the world finds itself where it was after the protectionist Smoot-Hawley tariff was signed into law in 1930. Eventually, after much harm is done, the world decides to move back to (somewhat) free trade as it did after World War II….

If we are truly at the beginning of a trade war, then we could see increased prices on consumer products across the board. Worse, it could even lead to product shortages if American manufacturing facilities can’t fill the gaps left by diminished imports.

But Are There Any Benefits to a Trade War?

Most experts seem to agree that the new tariffs on steel and aluminum could have far-reaching negative consequences. As F. McGuire writes on NewsMax:

Many financial analysts warn that Washington’s sudden push for steep tariffs on steel and aluminum imports could saddle the U.S. central bank with the worst of both worlds – rising inflation and a slowing global economy.

Inflation combined with a decline in economic activity would not be good for American consumers. And higher interest rates would make a bad situation worse. But there may be a silver lining for gold investors. Commodity Trade Mantra reports (emphasis ours):

One of the potential outcomes of a trade war is that other nations start dumping U.S. Treasury securities, which could boost gold demand. Trade partners may retaliate by dumping U.S. securities at time when the U.S. Treasury needs to access global capital markets. If materialized, a reduction in U.S. Treasury holdings may boost the demand for gold, supporting our bullish view on gold prices.

The economic uncertainty and potential effects of tariffs and trade wars could have a negative impact on your wealth, but ultimately be favorable for physical precious metals like gold.