Home » Blog » Will Hurricane Losses Trigger the Next Financial Meltdown?

Will Hurricane Losses Trigger the Next Financial Meltdown? 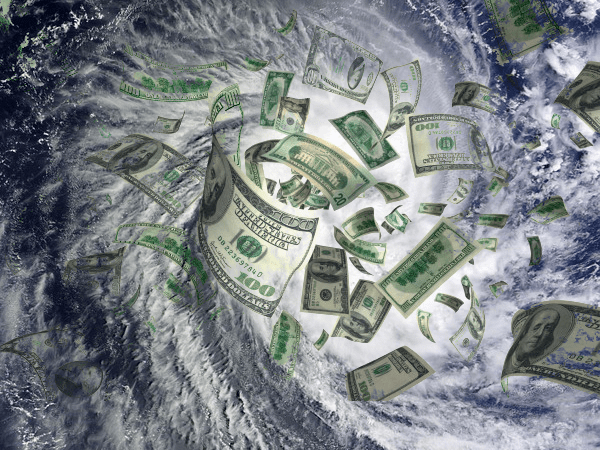 On September 6th, President Trump averted an end-of-month debt ceiling showdown by accepting a measure that tied Hurricane Harvey relief aid to a three-month suspension of the debt limit.

The nation breathed a collective sigh of relief because they would no longer have to worry about a government shutdown at the end of September. Even better, Texas would get financial help from the federal government.

So is there still any cause for concern? Yes, there is. While the economic impacts of Hurricanes Harvey and Irma are not fully known yet, we do know they caused billions of dollars in damage. As a result, for the first time ever, the federal debt cracked the $20 trillion mark.

Among the biggest losers are real estate, restaurants, retail, oil, fruit, and insurance companies. In a recent article, Wolf Richter writes about the overall decline in the restaurant industry and details the impact Hurricane Harvey had on foot traffic and sales:

Chain restaurants had already been struggling with 17 months in a row of year-over-year declines in same-store sales and foot traffic, the longest downturn since 2009. Then Harvey made landfall.

And August became the 18th month in a row of year-over-year declines, with foot traffic at chain restaurants falling 3.9% and same-store sales 2.0%.

In addition to industry-specific losses, there will be widespread job losses in the worst-affected areas due to businesses being unable to open or completely wiped out. U.S. News and World Report says:

Higher unemployment claims related to Harvey first started bleeding into national U.S. data last week, so analysts are broadly expecting an unemployment rate uptick for the month of September once Irma fully works its way through the country.

This will put additional strain on government resources, which are already nearly tapped out. If that sounds like an overstatement, consider this: FEMA’s disaster-relief fund was set to run out of money by Friday, September 8th — and that was before Hurricane Irma hit Florida.

To sum up what’s happening: Hurricanes Harvey and Irma have caused hundreds of billions of dollars in losses. As a result, there are heavy financial demands being placed on the federal government at a time when it’s short on cash and facing a financial crisis, which was just postponed until late December.

Financial losses don’t happen in a vacuum. They will have a large impact on the economy and inevitably have a spillover effect into the stock market.

As Dave Kranzler writes in the September 10th issue of the Short Sellers Journal, “It’s quite possible that the financial damage inflicted by the two hurricanes will be the final trigger-point of the next crisis/collapse.” He continues:

When the rare event occurs, it causes the “risk buyer” to default because the cost of making the payout exceeds the “risk buyer’s” ability to honor the contract. This is why Long Term Capital blew up in 1998, it’s why Enron blew up, it’s why the 2008 de facto financial collapse occurred. We are unfortunately watching history repeat. This is what occurred in the “The Big Short.”

It’s obvious that insurance companies stand to lose a lot of money as they pay out claims to people who live in the disaster areas. What’s less obvious is how these losses could affect the derivatives market. The derivatives market is many times larger than the underlying assets, so losses are quickly magnified due to the amount of leverage involved.

Prepare for a Financial Crisis Now

Hurricanes Harvey and Irma weren’t a surprise. Residents in affected areas were notified at least a week prior to landfall that they needed to prepare.

Right now you face a similar situation. There is a “financial hurricane” headed for U.S. markets. When it will make landfall is not yet known, but there is no question that it will hit in the near future. And when that time comes, you’ll want to be well prepared, preferably with something physical and known to thrive during crises such as precious metals.