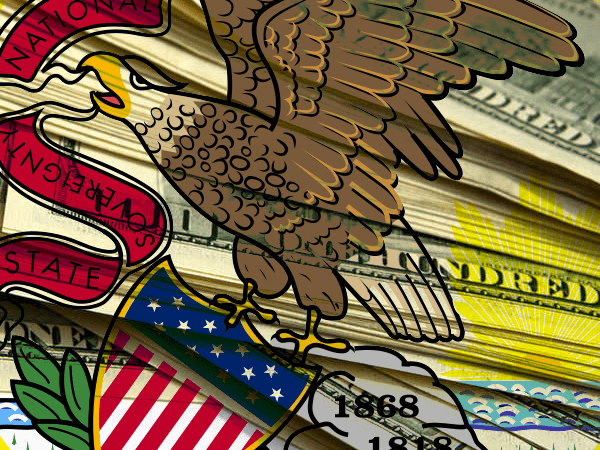 Illinois is considering a last-ditch attempt at saving its public pension plan. We discussed before how the Midwestern state is the epicenter of the U.S. public pension crisis. They’re now moving toward a risky gamble as lawmakers debate whether or not to borrow $107 billion with the intention of investing it in the financial markets.

To say they’re in a tricky situation would be an understatement. The “Land of Lincoln” is on the brink of bankruptcy as its five retirement systems have been in the red for years due to lackluster contributions. Add to this the fact that the state’s constitution has made it illegal to reduce worker retirement benefits, and the $129 billion debt they find themselves under doesn’t look likely to get better any time soon.

The fact that they may now resort to using debt to raise money to invest in the stock market reeks of desperation and can be considered foolhardy.

In a recent telephone interview, Robert Martwick, a Democratic member of the Illinois House of Representatives, revealed why the state looks set to take part in the biggest ever debt sale in the municipal market:

When you have the largest pension debt in the world, you probably ought to be thinking big.

According to Martwick, the State Universities Annuitants Association is proposing the idea to the legislature’s personnel and pensions committee. They believe if Illinois issue the bonds this year, it will save the state $103 billion by 2045 and save their retirement system from going bust.

However, there are high stakes involved as the success of the plan hinges on the state’s current pension debt growing at the rate it expects to earn on its investment. And these interest rates are normally much greater than what governments pay to issue municipal bonds.

So if the investment doesn’t make them a profit in relation to the interest they’d be paying on the loan, then they’ll be digging their debt hole much deeper than it already is.

This isn’t the first time a state has gone to the casino in an attempt to fix their money problems. New Jersey previously sold bonds for their underfunded pension system. The plan was unsuccessful though as it later saw its pensions continue to shortfall. Detroit also gambled with its pension system when it sold bonds in 2005 and 2006. However, it backfired so much, it went into bankruptcy.

Surprisingly, it won’t be the first time Illinois has tried this. Back in 2003 it sold a record $10 billion worth of bonds for pensions.

With the S&P 500 Index increasing 19 percent last year and hitting new highs, it appears Illinois is hoping to hit the jackpot. However, according to a study carried out by the Center for Retirement Research at Boston College, whether or not Illinois’ gamble will be a success depends on timing.

The research center discovered that while most pensions have made a profit in the aftermath of the recession due to equity gains, those sold after the late 1990’s rally or the crash in 2008 weren’t so lucky.

Will Illinois Be the First State Downgraded to “Junk Status”?

Illinois is already deep in debt. According to Moody’s Investors Service, in July its general-obligation bonds stood at $26.3 billion, while already having $8 billion in unpaid bills. If things keep going as they are, the state is in danger of becoming the first U.S. state to have its credit rating downgraded to “junk” status.

Adding to these fears were the opinions of financial analysts like Richard Ciccarone, the president of Merritt Research Services LLC in Chicago, which specializes in analyzing municipal finance. He believes the move won’t go down well in the bond market, saying, “It absolutely increases default risk. There’s no cushion.”

The stock market appears to be grossly overvalued right now, and Illinois could “lose everything” if the market crashed after following through on their plan.

The situation in Illinois goes to show you can’t depend on the government to look after your financial future. This could set off a domino effect with other states in debt who are likely to resort to the same desperate measure.

With inflation on the horizon, a flailing dollar, and the Fed likely to take measures, protecting your wealth should be your top priority. Although popular opinion would say to invest in the stock market, a wise investor knows gold is one of the best investments that can offer you true protection.