The Fed’s Fiddling While the Inflation Bonfire Incinerates the Dollar 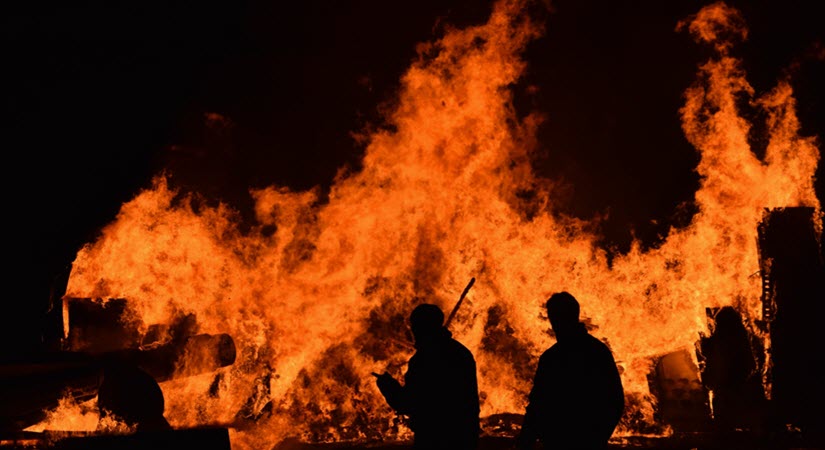 This week, Your News to Know rounds up the latest top stories involving gold and the overall economy. Stories include: The rug over stagflation is getting difficult to walk on, hedge fund manager bullish on gold in the current economic environment, and the long shadow of the Ukraine war.

There is a general and broad trend of so-called “financial experts” downplaying problems until those problems are painfully clear to even the most disinterested spectator, wreaking havoc across the economy. It’s the economist equivalent of turning up the radio in response to a pesky rattling coming from under the hood of the car.

After all, need we remember Federal Reserve Chair Jerome Powell’s months-long hand-waving and declarations that what quickly spiked to be 40-year-high inflation “transitory”? Nobody really bought it, and then we got a 40-year record. And then another.

Recently, it seems like these experts aren’t even trying to do damage control anymore.

For example, the World Bank says that “stagflation risks are rising amid a sharp slowdown in growth” in a rather gloomy Global Economic Prospects report. World Bank reduced its global growth forecast from last year’s 5.7% to this year’s 2.9%. In other words, the global economy’s growth prospects have been cut in half in just one year.

The World Bank report went on to say that low growth, likely paired with high inflation, will persist for the remainder of the decade. The year-on-year slowdown is now double that of 1976-1979.

And even those observers in the highest of ivory towers are finally noticing! Treasury Secretary Janet Yellen’s latest interview with CNN is rather interesting. In it, she said she wrongly expected last year that inflation would be a small and manageable risk, not even a problem, really. As the interview says:

I was wrong about the path inflation would take. As I mentioned, there have been unanticipated and large shocks to the economy that have boosted energy and food prices. And supply bottlenecks that affected our economy so badly that I didn’t, at the time, fully understand.

Given that the domestic and global economies had taken the largest hit since the Great Depression just last year, how unanticipated could it have been?

Did the head of the U.S. Treasury Department really think the Fed could triple the money supply without severe economic harm?

Don’t get me wrong – I’m glad she’s admitting what was pretty clearly an enormous policy blunder. That isn’t easy. I’ll take an academic who admits their mistakes over people who insist on doubling down on their bad ideas.

Kitco’s Arkadiusz Sieron is among the many analysts who have been pointing out the risks of stagflation, which now seems inevitable. How a stagflationary economy affects gold and stock markets is a matter of historical record.

But this time might be different! A similar Fed interest rate-hiking cycle back in the 1970s triggered a recession. But Treasury yields today are a fraction of what they were back then, and U.S. debt has risen more than 30x – a recipe for an unsustainable economy. Since financial markets typically price in the entirety of the Fed’s anticipated interest rate hikes as soon as they’re announced, gold owners can just sit back and watch the fireworks.

The unfortunates who don’t already own gold are much more likely to be disappointed.

I’ve said it before, and I’ll say it again: Gold is best bought before the next crisis. Because by the time you’re certain you need it, not only will the line be much longer, the price will likely be much higher, too.

David Einhorn: The Fed can’t control inflation, so gold HAS to go higher

Greenlight Capital’s David Einhorn likes gold. After all, gold is one of the investments that allowed his fund to buck the bear market trend, and rise 20.9% this year (so far).

During the Sohn Investment Conference, the money manager attempted to highlight gold’s necessity in every well-diversified financial plan.

Einhorn called out the Federal Reserve for claiming they’re actually in control, and able to manage the nation’s economic situation. In reality, the Fed’s primary  tool to subdue inflation in the form of interest rate hikes is causing both the $30+ trillion national debt and the government’s annual budget deficit to worsen.

The Fed cannot really fight inflation, Einhorn said, without completely destroying the economy. Every bump in the Effective Federal Funds Rate results in billions of dollars of additional debt-service payments on the nation’s red ink every month. Einhorn concludes the Fed is mostly playing make-believe – doing the economic equivalent of the orchestra that played “Nearer My God To Thee” while the Titanic sank beneath the waves. The Fed’s job is to keep everyone calm for as long as possible before the panic really starts…

As if this scenario didn’t already have “gold sets new records” all over it, Einhorn also expanded on the idea we’ve covered numerous times: that of central banks switching some of their U.S. dollar reserves for, more than likely, gold. This path will be expedited by the U.S. sanctioning Russia’s dollar assets, another point we’ve covered.

We know that Russia has relied on gold bullion to keep the ruble from going to zero. Einhorn expects this to be just the beginning of a global redefinition of not only gold but money itself:

The question is whether there’s enough gold to back the currency reserves. The answer is for the price of gold to go higher, perhaps much higher.

Wars are long, but their consequences are much longer (even for gold)

It can be said that the longer a war goes on, the greater its long-term effects. A war that lasts for a few years can take decades to remedy even just to an extent. As recently seen on Investing.com, we’re just three months into the Russia-Ukraine war – and most of the West is feeling the effects of this so-called “conflict east of Europe.”

Certainly, the most impacted are the victims themselves. Then we get to the country being invaded, Ukraine, whose infrastructure has taken a $100 billion hit. Millions have fled the country, paving way for a refugee crisis that could destabilize the Eurozone further. And these are only the primary effects.

The secondary effects come in the form of a global food and energy supply crisis. Russia and Ukraine are, or were, major agricultural exporters. Ukraine was a main global supplier of numerous agricultural goods, while Russia of gas and oil.

We can think of global consequences as third-order effects of the conflict. We see renewed hostility between the West and many nations traditionally allied with Russia. Russia, a large nation full of people who want nothing to do with the conflict, will be similarly destabilized and lose its position on the global stage. Russia may be forced into a junior partnership with China to survive economically.

So what does this mean for gold? Inflationary pressures abound and global growth forecasts are being cut. There are increasing expectations of an overhaul of global supply chains. Exactly what this means isn’t clear, but we don’t expect it will result in cheaper goods. The European Central Bank might be forced down the same ill-advised path that the Fed is on right now – or the opposite, choosing hyperinflation over stagflation.

Any one of these is good news for gold’s price. Together, they form a buffet of uncertainties that are already driving huge cash flows into safe-haven assets. Considering how bonds are performing year-to-date, an awful lot of that cash will get converted into gold.