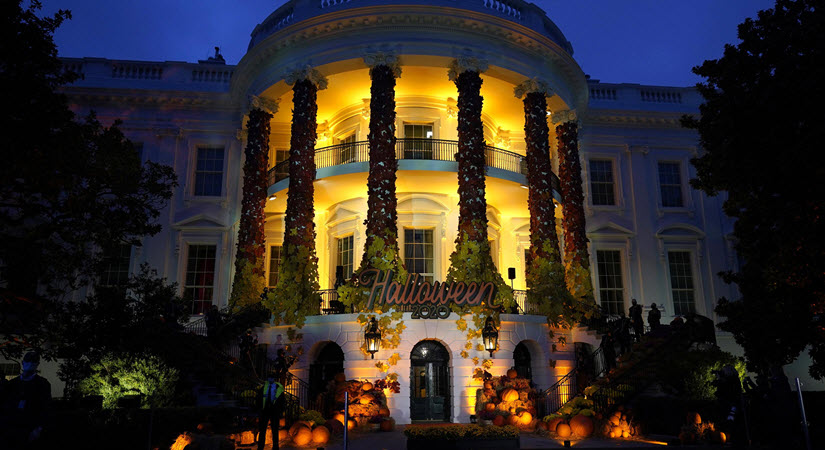 With Halloween right around the corner, things are already looking plenty scary.

“Get ready for a New Recession in 2022.” That’s how Jim Rickards ended a recent article, and sums up what could happen after the past year nicely.

Price inflation has been robbing Americans of their wealth at the fastest pace in 30 years (currently 5.4% “official” rate, unofficially closer to 9%).

The U.S. GDP to debt ratio is unprecedented when compared to any point in the last 60 years:

Just about everything that could indicate that a major correction is on the way is pointing in that direction.

Even Twitter CEO Jack Dorsey issued a stark warning about the potential for hyperinflation in the near-term:

Hyperinflation is going to change everything. It’s happening.

A corporate CEO using the word “hyperinflation” should give anyone pause. But just when you think it couldn’t possibly get any worse…

The Biden administration is playing a “$3.5 trillion game of chicken”

It would be great if politicians quit playing politics for midterm elections in 2022 and actually focused on solving economic problems. Sadly, it doesn’t appear that that is happening. Jim Rickards pointed a floodlight on one trillion-dollar example:

The infrastructure bill is only about one-third related to real infrastructure such as tunnels, bridges, roads and airports. The rest involves welfare for union workers and pork-barrel projects that do not benefit the public at large.

These unnecessary and wasteful spending habits aren’t new. Previous administrations have leveraged the same strategy. But welfare for union workers and funds for agenda-driven “pork” projects don’t improve infrastructure, no matter how you slice it.

At first glance, you wouldn’t think that this legislation contained funds for bloated government initiatives when it’s called the “Bipartisan Infrastructure Framework.” Well, that’s marketing for you.

It’s the same tired strategy used over and over again.

Last week we talked about the Christmas supply chain snafu. Part of the PR blitz pushing for all this massive infrastructure spending is, believe it or not, that very same thing. Biden’s “bottleneck czar” John Pocari said:

While the pandemic was an enormously disruptive force, I think it also laid bare what was an underlying reality, which was the system was strained before the pandemic.

See? With the right mindset, anything can become justification for massive government spending. The “system” (America’s infrastructure) was “strained,” or operating close to capacity on a day-to-day basis. And the fix, of course, is universal pre-K and bigger federal healthcare programs and free college for everybody.

(You’re right, that makes absolutely no sense. But when all you have is a hammer, in this case massive government spending, every problem looks like a nail…)

Rickards capped off his criticism by addressing the silly idea that this bloated legislation package would somehow stimulate the economy:

That sort of thinking would have people like us maxing our credit cards as though that would magically increase our income. That’s not how debt works. Yes, sometimes businesses take on debt to expand operations. Sometimes people like us take out mortgage loans to buy bigger houses. Businesses and citizens understand, though, that adding debt also adds risk. The Biden administration doesn’t seem to understand this simple concept. So they keep maxing out the nation’s credit cards, and even ask for a bigger credit limit, dreaming of hypothetical future prosperity.

The future prosperity is definitely hypothetical. The additional debt, and interest payments on that debt, and the 30-year-record inflation? That’s a certainty.

So where does this leave us?

If the “Bipartisan Infrastructure Framework” was the only signal that the U.S. economy was on the verge of serious trouble, you might be tempted to overlook it.

But the $3.5 trillion bill isn’t the only signal. In fact, there are so many economic signals that big trouble is brewing, it’s safe to say that preparing for “a new recession in 2022” isn’t a bad idea.

Can your savings weather the storm?

Short of a miracle, these economic signals will continue to flash faster and brighter, with the potential for that “big one” just around the corner.

But you don’t have to let a recession crush your dreams like so many people did in 2008-09. You can start taking action now to protect your savings.

Having a diversified portfolio with assets known for their protection during uncertain times is a strategic way to weather the storm, whether it comes in 2022 or 2030. Holding assets such as physical gold and silver could shelter your retirement savings from the risks of the overvalued markets.

Even better, physical gold has an excellent track record as an inflation-resistant asset. Diversifying with gold can help prevent the agony of watching your savings devoured by inflation. With proper diversification and a solid plan, you may find yourself watching the economic and political circus much more calmly, with the confidence that your savings and your future are as secure as you can make them.