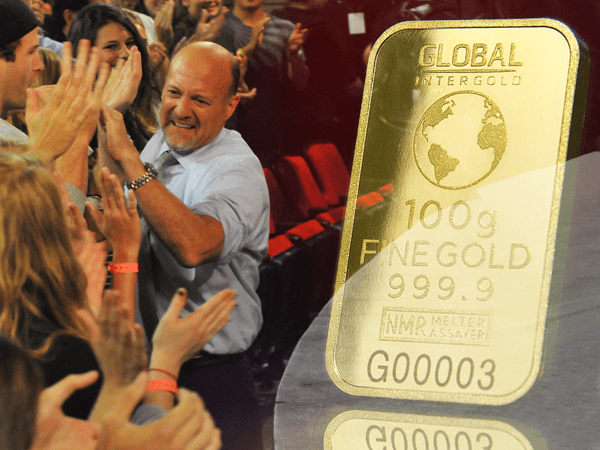 This week, Your News to Know rounds up the latest news involving gold and the overall economy. Stories include: Jim Cramer warns against Fed’s excessive tightening, Money Morning’s silver prediction for 2019, and how gold bulls regained the upper hand.

In the wake of the Federal Reserve’s decision to hike interest rates for the fourth time this year on Wednesday, many are wondering whether the central bank is doing too much, too soon, reports CNBC. “Mad Money” host and noted analyst Jim Cramer is among them, as he voiced his disagreement with the Fed’s course of action in the episode following the hike.

To Cramer, the current landscape of persistent tightening amid a potential economic slowdown has a familiar feel. The host reminded viewers that a similar scenario unfolded in 2007, when he warned that the Fed needs to start easing immediately to stave off a recession. As it would be, Fed officials continued on their path and ushered in the global financial crisis of 2008.

Cramer thinks we might be heading in the same direction right now, as the Fed could once again be seen ignoring the alarms in order to move forward with its agenda. According to the analyst, the Fed’s treatment of the stock market is perhaps the most damning indicator of what’s to come.

According to CNBC, Fed officials appear to have paid little attention to the recent crashes in equities or the Dow’s slide to a 14-month low. While Powell’s team insists on painting a rosy picture of the U.S. economy, Cramer says that the downturn in various stocks tells a different tale. The host explains that stock holders have been placed at the whim of Fed officials, as each additional hike threatens to hamper the economy further.

But there is always a way to turn a profit, and Cramer has little doubt that the gold market is the best place to do it. Given the Fed’s rhetoric so far, Cramer predicts that gold will turn expectations around and draw strength from the myriad of past, present and future hikes. Regardless of how dire the situation turns, Cramer says savvy investors will know how to make the most of what he sees as a true bull run in the gold market.

In a recent analysis on Money Morning, columnist Peter Krauth outlined his bullish prediction for silver in 2019 and beyond. As Krauth points out, silver’s immense value lies, among other things, in the metal’s versatility.

Besides being seen as a marquee store of wealth, silver also doubles up as a key component in high-tech electronics, with as much as 60% of silver demand coming from the manufacturing sector. And while much has been said about silver’s industrial uses, Krauth believes the metal’s investment demand will surprise everyone in the new year.

Of the various factors converging to give silver prices a boost, the most talked about might be the skewed gold/silver ratio. Since 2000, there have been only three instances where the ratio approached 80, and each of those was followed by a quick and powerful reversal. The 2003 reversal boosted silver prices by 61% over nine months while the 2008 one provided the metal with a 128% gain over 11 months. The most recent correction in 2016 saw the metal appreciate 28% over just four months.

The current gold/silver ratio of 85 is higher than in any of those instances, leading Krauth to believe that the upcoming reversal could be historic. Furthermore, signs point to inflation in the U.S. being considerably higher than officials claim, a positive development for a wealth-preserving investment.

Multiple analysts have stated that the dollar has peaked and silver bottomed, potentially leading to a long-term recovery for the latter. Should the greenback find itself trending lower from 2019 onwards, expedited along the path by a swelling federal budget deficit, silver will find itself pushed even higher.

Krauth also points to a complex supply glut as another source of silver gains in the near future. Mexico, the world’s largest silver miner, has recently seen a governmental shift that could significantly hamper mine production. This goes hand-in-hand with the general fall in silver supply, which has been going on since 2015. And, as Krauth notes, production is difficult to increase as-needed as only 30% of the metal comes from primary silver mines.

In line with his prediction for gold to reach $1,400 an ounce in 2019, Krauth expects silver to first climb to $16.50 in the first quarter. From there, Krauth expects the metal to eventually recapture the 2017 high of $18.50 before the year ends. However, given the traditional movement of the gold/silver ratio, Krauth says that silver is in a good spot to shoot up to $21.50 an ounce by the end of 2019.

After assuming the largest amount of bearish gold positions since 2001, large speculators are quickly re-learning to favor the yellow metal. The recent increase in long gold bets comes as stocks post their worst year since 2008 and their worst December, a traditionally strong month for equities since 1931.

Forbes contributor Frank Holmes believes that, amid various risks and tepid growth forecasts, equity investors are slowly beginning to turn to gold. According to Bloomberg’s Commodity Strategist Mike McGlone, this trend will only strengthen in 2019 as volatility in equities persists. Former Fed Chair Alan Greenspan agrees, stating in a recent interview that it would be very surprising to see the market recover.

Gold remains the year’s standout investment, returning more than 5% compared to negative 11.9% for the S&P 500 Index. The metal managed to provide a sizeable return even as it squared off against a sky-high dollar and a hawkish Fed policy. But with Fed officials promising to ease off tightening from 2019 onwards, a major hurdle for the metal could be removed as the greenback’s pressure finally subsides.

The latest report by precious metals consultancy firm Metals Focus forecasts a bull run in the gold market that will last several years. Besides the drivers listed above, the London-based company also pointed to a steady increase in gold consumption between now and 2023 as a key tailwind in the coming upturn.