Every week we update you on what’s happening with the precious metals market and other phenomenon that could affect your savings. This week, we shed light on the market activity surrounding gold and how it can enhance any investment. With China and India purchasing massive amounts of gold as well as a decreasing level of mining for gold, gold’s future has considerable potential. Also, how does the relationship between oil and gold relate to the value of the dollar? Here are this week’s headlines.

China and India Consuming Gold Faster Than It is Being Supplied 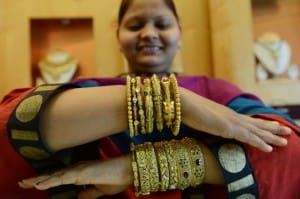 In a precious metals forum taking place in London last week, Bloomberg Industries Global Head of Metals and Mining Ken Hoffman opened the presentation with statistics exhibiting the aggregate gold consumption by both India and China. The figures showed that China has been consuming gold at a rate of 5.15 million ounces a month while India, even with import restrictions in place, consumes 2.85 million ounces a month. These numbers are quite large and significant given that global new mined gold output is estimated at 7.44 million ounces a month, indicating a deficit of 0.56 million ounces every month. Plus, these numbers could be understated given the fact that those from China are based on gold imports through Hong Kong, even though there are several other points of entry within the country. Gold supply has been seen as a surplus in recent years due to the sales out of the major gold ETFs, however it is seemingly unlikely that such large sale volumes will be repeated this year given the recent ebb and flow of ETFs. The gap between the supply and demand of gold will prove significant in coming months with India’s new Prime Minister Modi expected to relax the current import restrictions, which will enhance the Indian demand for gold. Bloomberg analysts also envisage global gold output falling approximately 1% this year.

Hoffman touched upon the differing sentiments that Chinese and Indians possess from Western investors talking about how citizens in those two nations have understood the value of gold as protection and security from financial volatility and instability for hundreds of years. It is also important to note the unknown factor of Chinese gold consumption given the possibility of underreporting of Chinese gold possession. China could be building its own gold reserves without sharing the numbers with the IMF and accumulating several gold reserves. Bloomberg estimates that the nation now holds somewhere near 3,000 or more tons of gold as opposed to the reported 1,054 tons. Chinese and Indian gold consumption reflects either country’s view of gold as a secure form of wealth and the key to the future of either’s economy.

There is a reason gold has always been of utmost value throughout history. It’s a rare commodity and has become even rarer as gold mines across the globe are becoming depleted. An article from the Wall Street Journal about mining company mergers underscores the current, dwindling supply of gold depositories in the world. The gold industry experienced extensive exploration as prices increased by a factor of six from 2001 to 2012. Prices have since leveled out to around $1,300 an ounce, staying above the $1,200 an ounce mark. With the price tapering off, so have the discoveries of new gold mines. As gold is being depleted, exploration and extraction costs rise in order to unearth more ground and access lower-grade gold. This process directly affects the price of gold, with the cost of extraction approximately at $1,200 per ounce of gold. In order to maintain output, mining companies are searching for any remote gold mines. Sean Boyd, the CEO of Toronto-based Agnico Eagle Mines Ltd. states, “It’s a fact that companies are having to go further afield and places that 20 years ago they never imagined they would be in.”

Rising extraction costs and the gradual depletion of global gold mines are compelling companies to merge and integrate in order to gain a competitive edge and optimize efficiency in accessing and mining higher-grade gold deposits. These costs have established $1,200 for the baseline price for an ounce of gold in order for miners to operate with profit. Any regression below that price would spur miners to halt the supply and force the price back up again.

Gold and Oil: Standing Strong in the Face of Inflation

Clients often ask us about the relationship between gold and other commodities. James Steel, Chief Commodities Analyst at HSBC Bank, spoke with CNBC during its “Commodities Corner” segment analyzing how oil price fluctuation is correlated with gold prices. Gold and oil each have an inflationary relationship, wherein as the dollar loses value, the price of both oil and gold generally increases. Gold and oil also have a relationship through the commodity indices. As energy prices and the price of energy-related commodities decrease, so does the price of oil. As the value of oil drops, trends have shown that managers and executives of large oil companies have sold “millions of ounces gold” that they have invested as a protective tool. This emphasizes the utilization of gold as a hedge against inflation, as the value of gold moves counter to that of the dollar.

The relationship between gold and oil is not a perfect one, as the price of gold has been relatively volatile in the past 2 to 3 years while the price of oil has been quite stagnant. The relationship is most noticeable when sharp movements occur in oil prices, which cause a significant rise in the price of gold, particularly as a result of geopolitical incidents. In recent years the gold market has been kept alive by the mass consumption of gold by the Chinese market which has helped to stabilize gold prices. The sharpest rises and falls in oil prices often have a significant impact on the price of gold. The most noteworthy commonality between gold and oil is their inverse relationship to the U.S. dollar. With the reduction and weakening of the value of the U.S. dollar, many experts still call gold a bastion of stability despite volatile price movement in recent years.