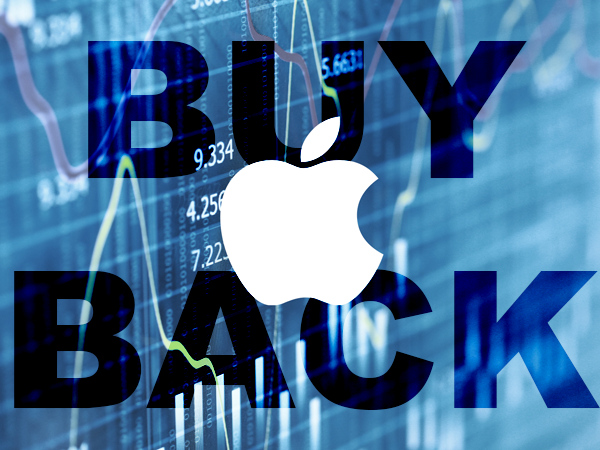 Last year was a record year for corporate share buybacks. The appeal of a buyback “gravy train” appeared to be too lucrative for investors to resist.

This year, the trend of companies buying shares to make math work in favor of better share prices seems to be increasing. But what if this method crashes and takes the market down with it?

A recent Wolfstreet piece shed light on Apple, who is a significant part of the buybacks by corporations (emphasis ours):

So despite their best buyback efforts, it seems Apple has not gained much momentum since October 2018 (when the last market correction started). You might think that would get investors to question the reason they invest in over-inflated stocks.

But then Wolf Richter illustrated one potential reason why the share buyback “gravy train” is still operating:

They lower the share count, and so earnings are divided by a smaller number of shares, which generates a larger earnings-per-share figure, and a lower price-earnings ratio, to bamboozle people who still bother to look at these metrics after 10 years of being told that fundamentals don’t matter.

Obviously, solid business fundamentals should matter. Whether they do or not still remains to be seen. But Apple is one company with the cash to pull off this “sleight of hand” shares trick.

However, other companies are dipping into the “buyback well” too, and at a record pace (see chart below): 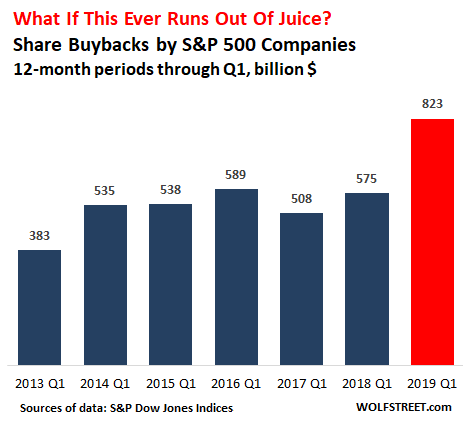 Some experts profess that share buybacks are a positive sign that a “company believes its stock is undervalued and is confident about its future earnings.”

But if those shares are inflated, based only on a “belief” that they are undervalued and “confidence” in future performance, it doesn’t seem like those share prices would be based on sound fundamentals (as Wolf alluded to).

Oracle, Pfizer, Bank of America, and Cisco Systems round out the top five buyback “leaders” for the first quarter of 2019 (and account for 27% of total buybacks).

Corporations seem to be looking at the short-term “ROI” for investors, rather than the longer-term implications of over-inflated share prices and skyrocketing debt.

If credit markets tighten, then these corporations may have to pay their debts. The market may go down with them, as the “gravy train” makes its last stop.

The 2019 Bull Market May Be “Artificially” Inflated

Some experts are giving share buybacks credit for the market rally that’s been happening since the end of December 2018. But if that is the case, and shares are actually artificially inflated by short-term “math,” can that growth stand?

At MarketWatch, a recent piece pointed at the artificial nature of this recent market growth in relation to recent low trading volume:

… in a period of very low trading volume like the present, corporate buybacks “can set the price” for a given stock, as companies are allowed to buy back 25% of their daily average volume. ‘When you’re taking out 25% slugs of your stock at a time,’ he argued, ‘it’s going to drive out short sellers, drive up the price, and maybe artificially inflate it.’

Gluskin Sheff Chief Economist and Strategist David Rosenberg brazenly claimed on CNBC that people who can’t see a recession coming are pretty much saying they “can’t smell the carbon dioxide.”

He also doesn’t think this buyback-financed rally will be sustainable, and could lead to a market crash. At CNBC, he also said:

It’s really about these bloated corporate balance sheets. There will be a price to pay for the unprecedented debt-for-equity swap we did this cycle, borrowing at low interest rates and buying back your stock. That is certainly something that is not sustainable.

He finished by issuing a warning about bond yields in relation to the buyback trend:

So share buy-backs, bloated balance sheets, debt for equity swaps, and a big warning from the bond market are all looking like ingredients for a rocky second half of 2019.

Protect Your Retirement Against a “Gravy Train” Crash

If the actions of these over-capitalized corporations buying back shares were compared to the dot-com bubble companies of the 1999-2002 era, they would share some eerie similarities. And don’t forget, that dot-com bubble popped loudly.

This year, similar fundamentals that those dot-com companies used to inflate their share prices may have us potentially headed right into a recession.

Before the “gravy train” crashes, protect your retirement. Precious metals like gold and silver can help through diversification because of their protection during times of economic turmoil.