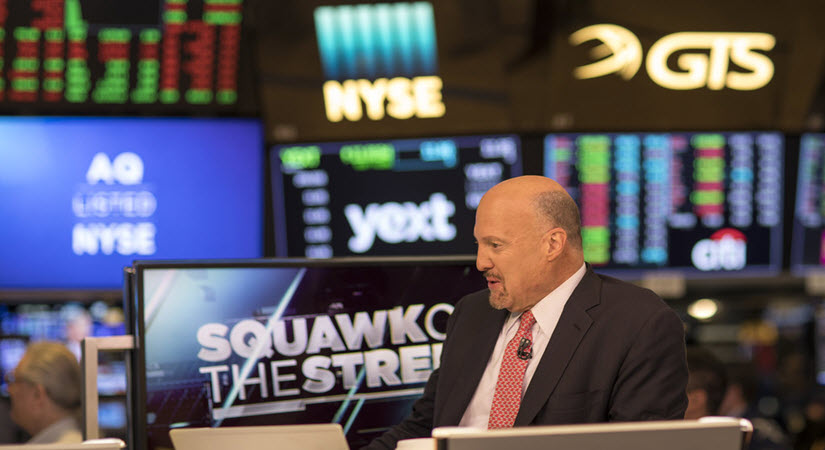 This week, Your News to Know rounds up the latest top stories involving gold and the overall economy. Stories include: Even notorious stock bull Jim Cramer turns to gold, the falling Dow-to-gold ratio, and how market sentiment is shifting in gold’s favor.

Jim Cramer has been one of the most die-hard stock bulls since 1987, and rose to national fame in the late 1990s thanks to his frequent guest appearances on CNBC during the run-up of the dot-com boom. That’s why it’s so surprising (though not unprecedented) that he recently recommended diversifying with gold.

I believe in gold. And gold goes up, and holds its value, during recession.

Over the past few years, Cramer has mentioned gold’s importance as a hedge against uncertainty, inflation, economic turmoil and similarly disruptive forces. He even revealed that his personal savings are diversified with gold.

Now, you might think that such a stock bull as Cramer would insist on investing in paper gold rather than physical gold coins and bullion. However, he freely admits that paper gold has its drawbacks, and concludes:

Physical gold is the cheapest way to do it.

Cramer’s gold recommendation is only surprising given the context of his typical, pro-stock-market, all-in economic optimism.

On the other hand, that’s precisely why it makes sense. Consider the context:

The S&P 500 Index officially entered a bear market last Monday, down more than 20% since the start of the year. As I’ve mentioned previously, this looks to be only the start of the stock market’s woes. The first-quarter fall was played down by most stock bulls (almost as if a recovery was underway).

In reality, it’s much more likely we’re seeing the beginning of the end of the longest bull market in U.S. stock history. The timing couldn’t be worse.

The official inflation rate is 8.6% (and likely, in reality, much higher), orders of magnitude above the Federal Reserve’s desired target of 2%.

Even the Fed’s too-little-too-late efforts to curb this inflation are virtually guaranteed to have brought on a recession – along with the end of the Everything Bubble. The Fed knows this, and are quietly revising GDP growth projections downward.

Along with gold, Cramer said two other investments hold value in a recession: expensive artwork and “mansions.” (By the way, academic research disagrees with his assessment – illiquid, rarely-traded assets like fine art and multi-million-dollar mansions aren’t as good as they look.)

Out of the three recommendations Cramer made for investing during a recession, only one is a truly liquid time-tested safe haven. I’m glad Cramer has diversified his personal savings with gold, and I’m sure he’ll soon wish he’d bought more.

What does the falling Dow-to-gold ratio mean?

We often talk about the gold-to-silver ratio, and indeed, its recent figures have left many heads with a need for scratching. But there’s an equally important and accurate economic gauge: the Dow-to-gold ratio.

The Dow Jones Industrial Average (DJIA)tracks 30 of the most prominent corporations in the U.S. across various sectors. The Dow-to-gold ratio tells us how much of the Index is needed to buy an ounce of gold: the DJIA at 35,000 and gold at $1,750 produces a figure of 20.

Rick Mills tells us that, as a general rule, a Dow-to-gold ratio over 15 means it’s time to sell the Dow and buy gold. Conversely, the ratio sinking to 5 or lower means it’s time to do the opposite. (In other words, selling high and buying low.)

The lower the ratio, the worse-off the stock market (and likely the economy). A ratio above 15 has, without exception, meant that the stock market is in a bubble and a reckoning is coming. Right now, the Dow-to-gold ratio is at 16.7.

How hard the Dow, and the economy, crashes remains to be seen. But some things are clear, such as a lack of options and quick solutions. The crash to 7 in 2010 was patched up by bailouts, quantitative easing and loose monetary policy. These were the Fed’s go-to “solutions” – even though debt was what brought on the Great Financial Crisis in the first place.

Today, we have estimates that total global debt ranges between $185 to $460 trillion, the latter being 560% of the world’s economic output. The U.S. is one of the three most indebted nations, along with China and Japan.

Remember: nations can always print more IOUs, and corporations can always issue more shares of stock. These are reasons it makes sense to monitor the value of paper assets in terms of a store of value that’s uninflatable, like gold.

Investing Daily‘s John Persinos is a self-admitted optimist. He doesn’t believe that either hyperinflation or stagflation will materialize, even though one could argue the latter already has. His best-case scenario involves a restoration of supply chains and a normalization of inflation by late 2022 or early 2023.

It’s indeed an optimistic forecast, when so many experienced economists believe that the Russia-Ukraine conflict alone will cause an overhaul in global commerce. Nonetheless, even this optimism has to contend with an increasing number of questions from concerned readers.

Q: Should I increase my exposure to gold? The textbooks tell us that it’s a safe haven during times of crisis.

A: Yes, gold is a time-tested hedge against crises, which are multiplying with each passing day.

People want to know how close to a recession we are, how realistic the prospect of declining inflation really is, and (not coincidentally) whether gold is a good investment in times like these.

Persinos agrees that the Federal Reserve’s battle with inflation has an unclear outcome. One thing he notes, which we imagine will prove important, is how different conditions are now than in 2007-2008. The period, which Persinos calls the worst economic downturn since the 1930s, had gold jump from $840 in 2007 to $1,200 in 2008. And, of course, $1,910 in 2011 (learn more about gold’s track record over time here).

Inflation stayed in check throughout this bull run, far removed from the already 40-year highs we are seeing now. Unsurprisingly, Persinos says gold is ready for a bull run and reminds investors that diversifying savings with 5%-10% allocation to gold is a traditional standard.

It bears repeating, though, that the conditions we are in are anything but standard. The CBOE Volatility Index (VIX) tells us as much. Analysts and talking heads often seem stuck in a perpetual bout of optimism – so it’s often smarter to watch what they do with their own money, rather than listen to what they say about broader economic issues.

Our flagship publication, Personal Finance, recommends the following allocations: 40% stocks, 25% hedges (such as gold and other precious metals), 25% cash, and 10% bonds. Tweak these percentages, according to your stage of life and tolerance for risk. [emphasis added]

Diversifying fully a quarter of your savings with “hedges,” or what I’d call “investments that are negatively correlated with stocks” like physical gold and silver tend to be, may sound excessive to some. On the other hand, if, like Mark Twain famously said, you’re more concerned with the return of your money rather than return on your money, you may prefer an even larger allocation to physical precious metals.

That’s why the recommendation to, “Tweak these percentages, according to your stage of life and tolerance for risk” is excellent advice. That’s why we developed the historical asset allocation calculator – try it out!