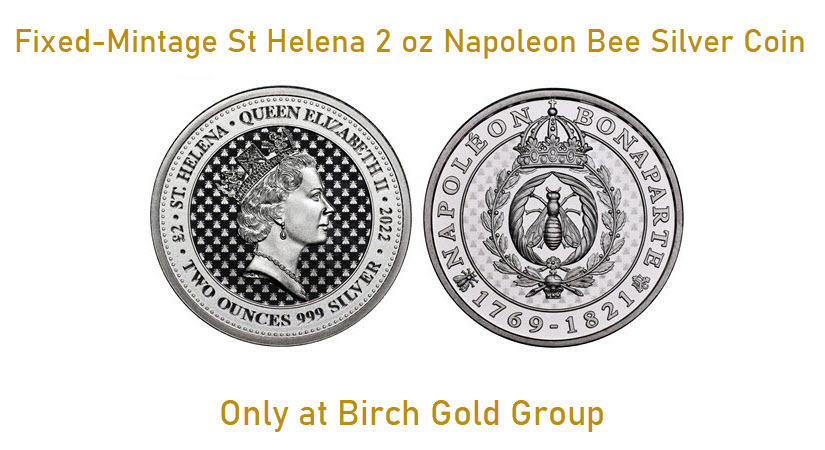 The East India Company, in partnership with Saint Helena, crafted an exquisite fixed-mintage 2 oz silver coin to honor the most famous man ever buried in the sands of the island: Napoleone Buonaparte, or Napoleon Bonaparte, Premier consul of France, also known as Emperor Napoleon I. Birch Gold Group will be the sole authorized distributor of this historic coin.

“This is a truly unique and fascinating coin,” said Phillip Patrick, Precious Metals Specialist at Birch Gold Group. “It’s a perfect commemorative for such an historic and controversial figure as Napoleon – there haven’t been many of those. And its fixed-mintage status makes it an even more compelling piece for physical precious metals investors.”

What makes the 2 oz Napoleonic bee silver coin so interesting? Maybe it’s the symbolism. Instead of featuring the fleur de lis of the French monarchs, or the Gallic rooster (France’s national animal since Roman times), this coin features Napoleon’s personal heraldic beast: the humble French honeybee.

The honeybee symbolizes French industriousness and the willingness of individuals to make sacrifices for the good of the nation. After the 1789 French Revolution, the old symbols were no longer welcome. Like Marianne (the personification of liberty), the honeybee represented the new, democratic order – a productive, wealthy nation.

The coin’s reverse showcases its namesake, the French honeybee, front and center.

Napoleon’s bee is surrounded by a garland of laurels, those ancient symbols of victory to remind us of the seventy battles Napoleon personally commanded (and lost only seven). Above the bee, we see the crown Pope Pius VII handed Napoleon during his coronation at Notre Dame Cathedral in 1804. As the story goes, Napoleon was too impatient to wait for the elderly Pope to place the crown on his head, so he snatched it and crowned himself emperor.

The reverse legend reads, “Napoléon Bonaparte” and the motto “1769-1821.” In the coin’s outer circle one of the Emperor’s bees and the East India Company mint mark punctuate these two phrases.

The obverse displays the 1985 “third portrait” of Queen Elizabeth by renowned sculptor Raphael Maklouf that appeared on circulating British coinage from 1986-1997. The background pattern of bees is repeated but in opposite contrast, light on a dark background. The obverse legend includes the 2022 year of mintage, weight, face value of £2 and 0.999 purity.

After the twenty-three-year series of conflicts collectively called the Wars of the Coalition or the Napoleonic Wars, Napoleon abdicated his throne for a second time. Previously he’d been defeated and exiled to Sardinia in the Mediterranean, conveniently close enough for a daring escape. The second time the allied forces of Great Britain, Germany, Spain and the rest of Europe defeated Napoleon, they didn’t take any chances.

Instead, Napoleon was exiled to the tiny, remote island of Saint Helena in the South Atlantic Ocean, 4,500 miles from Paris. He spent his final days with a small cadre of followers, complaining about the weather and playing endless hands of cards. The former emperor and one of the world’s greatest military leaders died in 1821, having spent his final six years on Saint Helena.

Birch Gold Group is delighted to offer this fixed-mintage 2 oz silver coin in honor of such an incredible historic figure. Remember, this coin is only available from Birch Gold Group.

Furthermore, due to the fixed-mintage nature, the Saint Helena Napoleon bee coin may not be available for long. To confirm availability and current pricing, call (800) 355-2116.