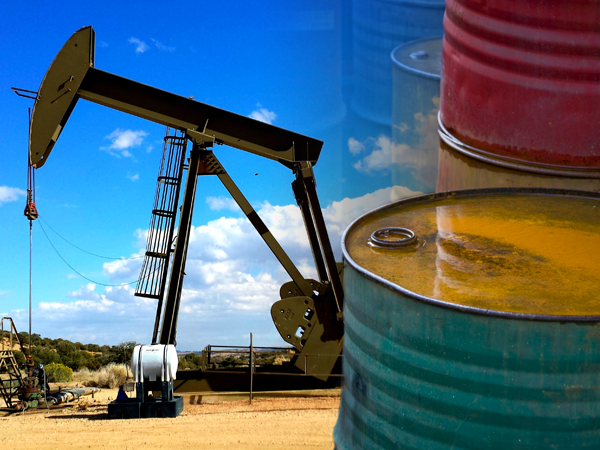 Since WW2 the U.S. has witnessed eleven economic recessions. During this time economists have noticed an interesting trend: all those past recessions, except for one in 1960, were preceded by an increase in the price of oil. It’s for this reason that an increase in oil price is often viewed by many economists as a reliable indicator that a recession is on the way.

As the graph below shows, since President Nixon cut the dollar’s last ties to gold in 1971, every single spike in oil prices has had the effect of throwing the economy into a recession. 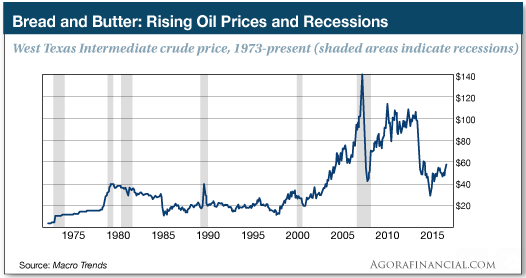 Although other sources of energy are rising in popularity, oil is still the fuel that keeps our economy going. However, our over-reliance on oil comes at a cost. Sharp increases in oil prices, or “oil shocks”, can send ripples through the economy as it puts pressure on other prices to increase.

This causes slower GDP growth, higher levels of unemployment, and an increase in the cost of living. However, it’s the inevitable drop in stock market prices which follows that’s a cause of concern for investors.

Take the last recession in 2007–09. At the start of 2007, oil was priced at $70 a barrel, by mid-2008, this more than doubled as prices skyrocketed to $147 a barrel. With the housing bubble and the banks’ recklessness, the rise in the price of oil was the straw that broke the camel’s back.

Before that was the recession at the start of the century. Crude oil was just $11 a barrel by the end of 1998. By late 2000, the price had tripled to $34 a barrel. This period was marked by the dot-com crash in early 2000, which was followed by a recession the following year.

These are just two examples which show how sensitive the U.S. economy is to big jumps in oil prices. Both show how, when a sharp increase occurs, the economy eventually gets knocked off balance, and the stock market crashes. However, it was the recession in 2001 that most closely mirrors what’s happening today.

How Oil Prices Could Triple

Fast forward to today, and the price of oil could easily triple from the $26 a barrel it cost in February last year. In the last twelve months alone, prices have doubled. And after already witnessing a jump back in June, and the growth in global demand, it’s possible we’ll see prices rising a further $15-20 a barrel by early next year.

In other words, the price of oil could double again, and then we’d witness a repeat of what happened during 1998-2000, which set the tone for the recession that followed. Hence, why some analysts are predicting a recession by next summer or fall.

Nothing is ever for sure when it comes to investing. That’s why every investor needs to pay close attention to trends, and the consequences they can bring. Sharp increases in the price of oil before every economic recession for the last few decades is a trend that could prove costly if ignored.

That’s why people are turning to gold. It helped them protect their wealth in previous recessions, and will continue to do so when we enter the next one. When you want to protect your wealth, gold is your best option to do so. And with jumps in the oil price preceding every recession for the last 50 years, the sooner you move into it, the better.