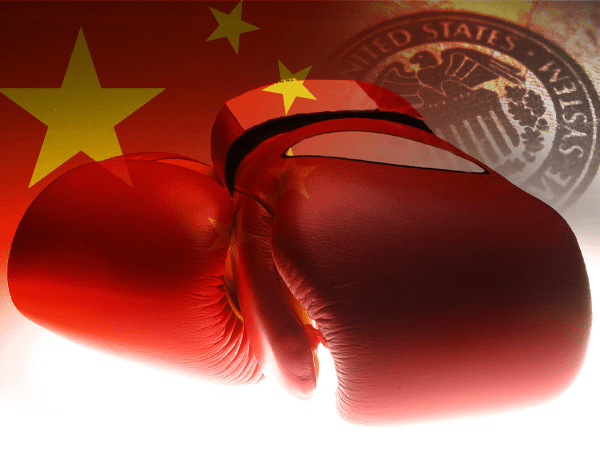 Maybe you’ve seen this scenario before: A boxer gets back up after violently being knocked down, only to get knocked out shortly after.

At the end of last year the Dow Jones suffered a severe correction from October 3 to December 24 (see both red arrows below):

After recovering, the Dow now seems to be struggling to “stay up” since the end of April. Could this mean we are headed towards another major correction?

Because of recent developments in the U.S.-China trade wars and Fed monetary policy, Frank Holmes seems to think so, writing in Forbes:

I’m not going to use the R-word here. All I’m going to say is that it might be time for investors to brace for a significant correction—especially with debt at record levels and the Federal Reserve left with very little firepower to combat a full-blown crisis.

So let’s examine the “one-two” punch that may trigger this “significant correction”.

According to Evelyn Cheng over at CNBC, POTUS recently increased tariffs on $200 billion of Chinese goods from 10% to 25%, and put telecom provider Huawei on notice.

If the U.S. would like to keep on negotiating it should, with sincerity, adjust its wrong actions. Only then can talks continue.

The U.S. … crackdown on Chinese companies not only seriously damages the normal commercial cooperation between both countries, but it also forms a great threat to the security of the global industrial and supply chain… China is firmly opposed to this. We will closely monitor developments and make adequate preparations.

The increase in tariffs has already had a major impact on international trade according to a recent IATA report, with growth dropping sharply by more than 3.5% since the tariffs were imposed (see chart): 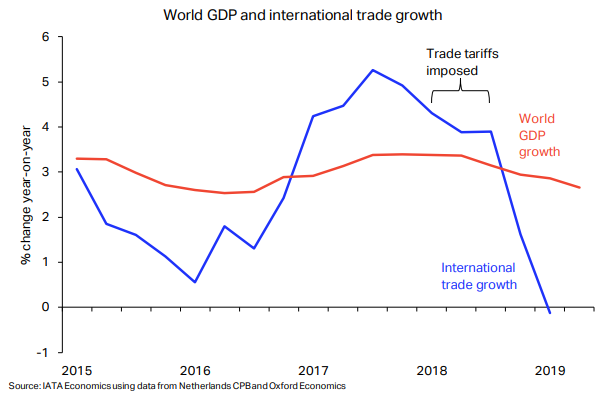 In the U.S., the tariffs are impacting companies like UBS, which is projected to close 12,000 locations resulting in an estimated loss of $40 billion, according to the Forbes article. The resulting job losses and economic impact would be staggering.

As for companies operating in China, according to an official survey, the impact increased tariffs have had is dire:

The vast majority (74.9%) of respondents said the increases in U.S. and Chinese tariffs are having a negative impact on their businesses. The impact was higher for manufacturers at 81.5% for U.S. tariffs and 85.2% for Chinese tariffs.

These tariffs are likely hitting consumers in their wallets too. According to a Goldman Sachs chart shared on CNBC, nine consumer categories were hit particularly hard by increased tariffs: 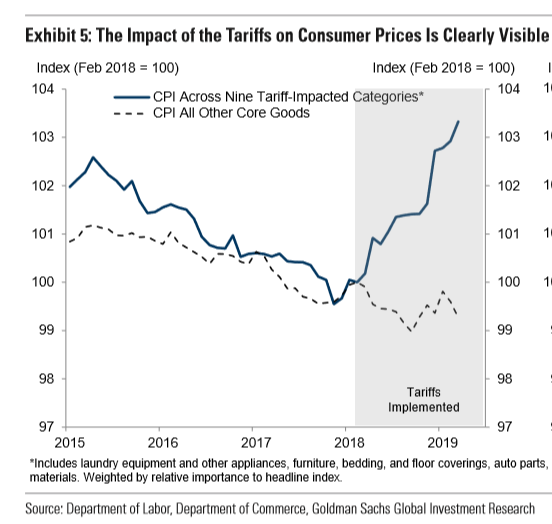 If China and the U.S. don’t reach a trade agreement soon, which doesn’t appear likely, the ongoing trade war could provide a knockout punch to the economy by itself.

But that’s not the only punch the economy is taking, as Fed Chairman Powell may also provide a potential monetary policy “haymaker.”

According to May 2019 FOMC meeting minutes, the Fed still has rose-colored glasses on when it comes to reporting inflation, sticking to its “symmetric rate” philosophy (emphasis ours):

… the Committee will assess realized and expected economic conditions relative to its maximum employment objective and its symmetric 2 percent inflation objective.

But as usual, their reporting excludes some costs…

On a 12-month basis, overall inflation and inflation for items other than food and energy have declined and are running below 2 percent.

Food and energy are pretty important inflationary items to be ignored, especially if the trade wars trigger a situation where inflation gets out of control.

According to official sources, inflation actually sits at 2.1% and is on the rise, despite Chairman Powell’s attempts to minimize it. Real inflation, reported at ShadowStats using older methodology, sits closer to 6%.

It looks like this one-two punch of Fed policy and trade war negotiations may cause inflation to “run hot” in the near future, as Powell previously alluded to in March.

Not a good outlook if it all plays out.

The U.S. Economy May Struggle to “Get Back Up” This Time

We are riding through a turbulent market on the cusp of a rapid inflation increase. Markets like this can do damage to retirement portfolios that aren’t resilient enough.

Assets such as gold and silver should be considered for any portfolio “resilience” plan. As shown in the Oxford Economics chart below, gold is known for its ability to outperform other assets during inflationary markets: 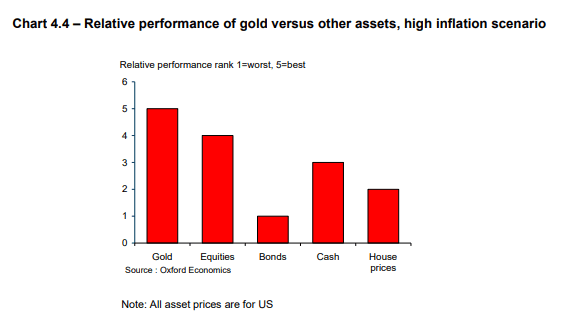 Even Frank Holmes brought attention to gold’s performance during times of high inflation, saying this is a favorable climate for the yellow metal. But don’t wait till after inflation has run too hot. The time to seek out the security and benefits of safe haven assets is now.