Home » Blog » Both Optimists and Pessimists Make the Same Mistake

Both Optimists and Pessimists Make the Same Mistake 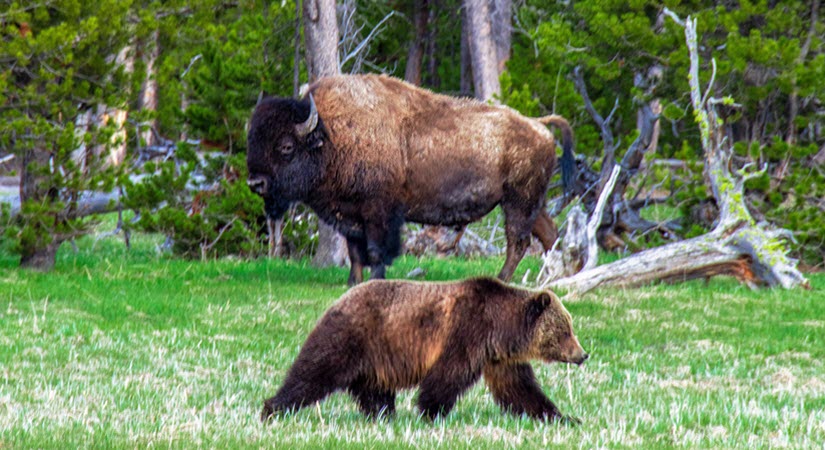 A brown bison and a grizzly pretend not to notice one another in Yellowstone National Park. Photo by Steven Cordes

Market optimists remain convinced that “everything is fine.”

After all, the stock markets keep climbing, the Fed remains optimistic inflation will subside in the near term and supply chain issues will somehow, magically, work themselves out.

One CNBC article published just before October’s inflation numbers even claimed that the stock market “party” would keep going strong, even though inflation came in hotter than expected at 6.2%, yet another increase:

Stocks could take aim at new highs in the week ahead, even as investors face fresh data that could show the highest year-over-year jump in consumer inflation in more than 30 years.

Stocks touched record levels Friday, after a monumental week that included the Federal Reserve’s announcement that it will wind down its bond buying, the first big step away from the easing measures it put in place to fight the pandemic.

In addition to stocks that “touched record levels,” optimists could make the case that the employment market is doing moderately well, for now:

Total nonfarm payroll employment rose by 531,000 in October, and the unemployment rate edged down by 0.2 percentage point to 4.6 percent, the U.S. Bureau of Labor Statistics reported today. Job growth was widespread, with notable job gains in leisure and hospitality, in professional and business services, in manufacturing, and in transportation and warehousing.

Taken together, these optimists could be forgiven for acting as though everything is fine. The problem with this mindset is, optimists seem to just filter out facts that disagree with their fervent hope.

We don’t have the luxury of looking at just the hopeful news. Let’s turn our attention to the big picture…

Everything is fine (unless the numbers say it isn’t)

Let’s focus on some other facts a little less palatable to the everything is fine crowd.

The most recent inflation update warns us that for the last 12 months inflation has risen each and every month with a single exception.

Fed Vice Chairman Richard Clarida commented on how problematic the overall inflation is for the central bank, telling The Wall Street Journal:

The rise in inflation this year — which increased 4.4% from a year earlier in September, according to the Fed’s preferred gauge — was much more than officials’ desired “moderate overshoot” of the central bank’s 2% inflation goal.

Well, yes, three times higher than the target is bad news. (Imagine having your kitchen remodeled, and your general contractor’s final price comes in three times over his own estimate…)

The WSJ piece continued by adding: “The Fed official said most of his colleagues who participate in rate-setting meetings believe the risks right now are tilted to higher-than-anticipated inflation outcomes.”

In case you don’t understand Fedspeak, that means, “Things are going to get worse.”

And they’re already looking pretty bad across the board…

Is there any corner of our economy where inflation isn’t surging?

The answer is, mostly, a resounding no.

According to official data, a single category, “medical care commodities,” didn’t have any increase in inflation. Every other tracked category of consumer items saw an increase.

A sample of the many shocking from the Bureau of Labor Statics report:

But that’s not all. Further up the pipeline at the producer level, inflation is raging over 20%, as reported by Wolf Richter. That’s not surprising, considering that essential stuff like gas and fuel oil and electricity are more costly. Unfortunately, these producer costs are usually passed down to the consumer in the form of higher prices once those produced goods finally hit the store shelves.

That not only means higher inflation isn’t going away any time soon, it means inflation is already worse than we know.

Since the 1930s, the research suggests that almost every country suffered its worst real returns during high inflation periods. Real returns are actual returns minus inflation.

Simply put, high inflation is bad for companies just like it’s bad for you and me. Further, real returns suffer from high inflation. (It’s like the old joke, where the broker calls you and says, “Good news, your portfolio is up 5%. Bad news, inflation is 6.2%…”)

We doubt facts and data and historical precedent will be enough to dissuade those who’ve drunk deeply of the everything is fine Kool-Aid.

Maybe for those who aren’t too far gone, these two pieces of data will add more credibility and help them reconsider their beverage choice…

Another Wolf Richter report echoed the 2008 financial crisis, updated for 2021:

Among FHA-insured mortgages, serious delinquencies (90+ days behind) have been dropping since the 12% peak in February. By the end of September, 8.5% of FHA mortgages, or 632,000 mortgages, were seriously delinquent, according to a report by the AEI Housing Center. This is still far higher than the rate before the pandemic of just over 4%… [emphasis added]

With the foreclosure moratorium having expired on July 31, if a buyer cannot meet the requirements of a modified mortgage, then that property could go into foreclosure. Because that’s how the law works.

Although the “foreclosure rate tripled in two months, from 0.2% through July, to 0.7% at the end of September,” they aren’t yet approaching 2008 financial crisis levels.

This is concerning, but not yet alarming. Things may get better, but we’ll have to wait and watch to see how it turns out.

The more concerning element is, real estate woes aren’t limited to the U.S. The ripples in the global real estate markets are only just beginning…

In a press release titled Evergrande officially defaulted – DMSA is preparing bankruptcy proceedings against Evergrande Group, we learn that the Evergrande fiasco has gone from bad to awful mighty quick:

China Evergrande Group, the second largest real estate developer in China, defaulted on interest payments on two bonds back in September… Only the DMSA – Deutsche Marktscreening Agentur (German Market Screening Agency) already recognized the default at that time and proved in a study that the bankruptcy of Evergrande, the world’s most indebted corporation, could ultimately lead to a “Great Reset,” i.e. the final meltdown of the global financial system. [emphasis added]

One company in China, even a really big one, defaulting and going into receivership might not sound so bad. Here’s the thing: The entire Chinese real estate market is melting down: Kaisa Group, Modern Land, Yango, China Properties, Aoyuan Group, Times China Holdings, Xinyuan Real Estate, Yuzhou Group Holdings and Sunac China Holdings are all companies struggling to avoid default.

That’s a bigger problem than you think, because 70% of Chinese household wealth is invested in real estate.

It’s so bad, the Federal Reserve is worried about economic contagion. This might be the first time China sneezes, and the U.S. gets a cold…

As DMSA senior analyst Dr. Marco Metzler said: “In [the Fed’s] latest stability report, it explicitly pointed out the dangers that a collapse of Evergrande could have for the global financial system.”

If the Fed’s right to be concerned about this, maybe everything’s not fine after all?

It could be worse though, right? At least 70% of your savings aren’t invested in Chinese real estate.

That’s the beauty of diversification. A well-diversified investment plan can help you thrive when everything really is fine, and shelter your savings when everything’s not fine…

Why pick a side?

The real problem with the everything is fine crowd is that they’re convinced they’re right.

In investing, there’s always uncertainty. The “everything is fine” crowd is making the same mistake as the perma-bears who annually publish a new book about how the S&P 500 is going to zero.

Investing isn’t sports. You don’t have to pick a side! (And if you do, it’s so much harder to admit when you’re wrong.) In investing, mistakes cost money. The bottom line isn’t whether or not Evergrande’s troubles will crash the U.S. stock market, or whether inflation will leave us paying $9.99/gal for gas.

The bottom line is your future. The bottom line means providing a stable, secure lifestyle for yourself and your loved ones regardless of what happens.

Maybe we all spend too much time arguing who’s right and who’s wrong. It’s probably a better use of our time and attention to make sure our savings are diversified to benefit from rising markets or falling markets, high inflation or low inflation. Now is a good time to consider hedging your bets, especially if you’ve already picked a side. Don’t worry about being right or wrong. Don’t let your ego stand in the way of your financial future.

When you’re considering safe-haven diversification for your savings, take a look at physical precious metals like gold and silver. Gold is a top inflation-resistant asset and enjoys a reputation as maybe the best “portfolio insurance” against market calamities. Silver isn’t just a precious metal, it’s a high-demand industrial material crucial to a number of industries.

If you do nothing else, please take this lesson to heart: Don’t pick sides. Instead, do your best to ensure you and your loved ones stay safe and prosperous regardless of the boom-and-bust cycle. It’s better to be prudent than certain.