Home » Blog » Overpriced Stocks May Be Bubble Ready to Pop

Overpriced Stocks May Be Bubble Ready to Pop 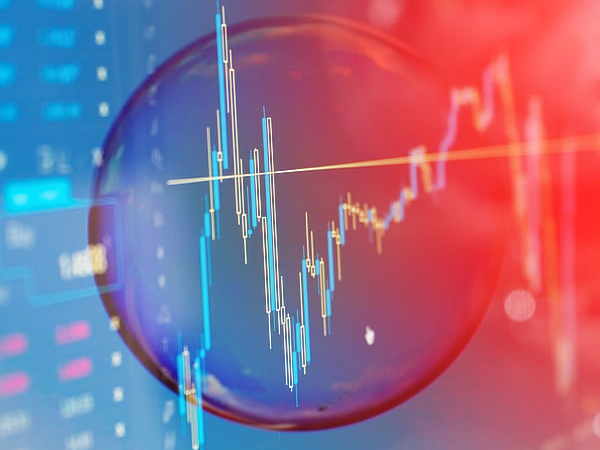 Even if local and state governments hadn’t shut down businesses in attempts to mitigate the coronavirus, the U.S. economy was still set up to take on a number of economic challenges.

Billionaire hedge fund investor David Tepper told CNBC on Wednesday the stock market is one of the most overpriced he’s ever seen, only behind 1999. His comments sent stocks to a session low… He also said some Big Tech stocks like Amazon, Facebook and Alphabet may be “fully valued.”

If we take Mr. Tepper’s concern at face value, the U.S. could be on the verge of another major stock bubble explosion.

He did add that he thought stocks were even more overvalued in 1999, but of course time will tell if that ends up being true.

Tepper also had words of warning on the Fed’s recent infusion of liquidity into the markets, saying, “The market is pretty high and the Fed has put a lot of money in here… There’s been different misallocation of capital in the markets… The market is by anybody’s standard pretty full.”

If the market is “pretty full,” then good fundamentals can’t be in play. Another CNBC piece reinforced this observation by comparing 30 million unemployment claims to the still-rallying stock market:

Stocks, though, are rallying in the face of historically awful economic numbers, in a bet on higher profit margins and an aggressive recovery that seems increasingly risky.

At some point, profits and other business fundamentals have to justify a company’s stock price. Media hype alone can’t cut it for the long term.

This chart from the same CNBC article further reinforces the idea that fundamentals are not yet factored into stock prices: 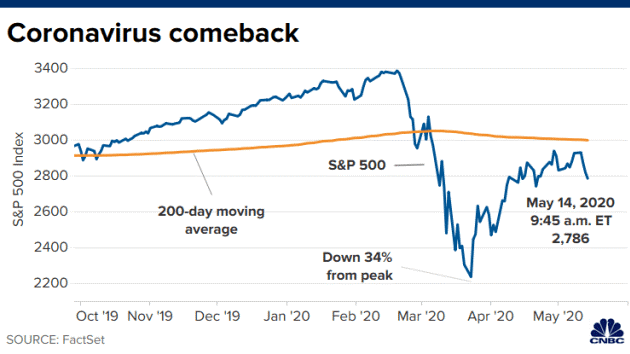 You can see that even the recent rally in the S&P 500 hasn’t been quite strong enough to eclipse the 200-day moving average, which isn’t a positive sign.

James Knightley, chief international economist at ING, commented on the apparent appetite companies may be having for cash, in lieu of a focus on profits:

The massive decline in demand means that there is this inventory overhang… That means price cuts coming through. Profit margins are going to remain under pressure.

If that “pressure” isn’t addressed, stock prices could deteriorate quickly.

The Dow dropped sharply on May 12, and has struggled to recover since, after Federal Reserve Chairman Powell sounded a somber note on the relatively positive performance of stocks in recent weeks, saying, “It may not be the final chapter, given that the path ahead is both highly uncertain and subject to significant downside risks.”

As usual, the Fed’s only response to these downside risks is “more policy,” but this time Powell turned to Congress for that response, according to CNBC:

Powell said the coronavirus has triggered a situation unlike previous recessions the U.S. has endured, and the response may have to be more from Congress than the Fed.

It seems odd that Powell would place so much blame on the virus; economic cracks started to appear in August 2019 when the yield curve inverted. That was quickly followed by a repo market crisis that started in September, which the Fed scrambled to reign in.

Since then, the market has been in chaos, as the Fed has continued various liquidity operations to keep the repo markets from seizing.

Add the decision by state governments to shut down businesses in an effort to mitigate coronavirus spread, and the U.S. seems to have lit the economic powder keg.

So if the stock market is “full”, as alluded to by David Tepper above, the market chaos may be just the catalyst needed to pop that bubble.

If that happens, hang on to your savings.

A Dangerous “Trifecta” Has Materialized

The situation surrounding this “trifecta” of a pandemic, Fed intervention, and inflated stock prices will continue to develop over the next few months. It’s safe to assume it will result in plenty of uncertainty (and possibly panic) in the markets.

But you don’t have to let a volatile market hit your retirement the way it did to millions of people during the 1999 dot-com bust. The best time to prepare is now. Diversification is an important consideration.

On the chance that this situation goes sideways, precious metals like gold and silver are assets to consider that could prevent your retirement savings from suffering the consequences.