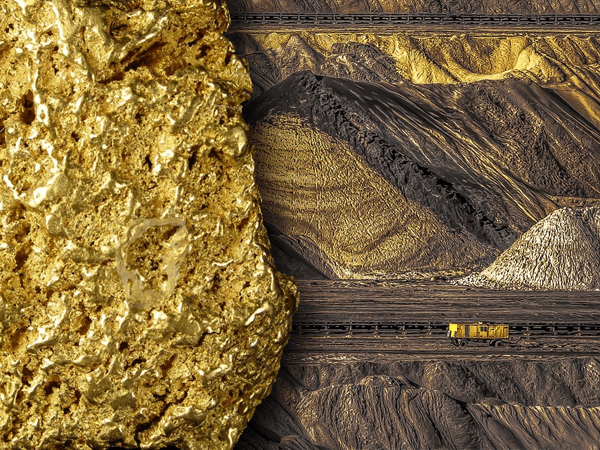 Gold is a finite resource. According to a recent study in Science Daily, most of the available gold was initially deposited in the Earth’s mantle (emphasis ours):

The removal of gold to the core should leave the outer portion of Earth bereft of bling. However, precious metals are tens to thousands of times more abundant in Earth’s silicate mantle than anticipated. It has previously been argued that this serendipitous over-abundance results from a cataclysmic meteorite shower that hit Earth after the core formed. The full load of meteorite gold was thus added to the mantle alone and not lost to the deep interior.

As plumes of molten rock rise to the surface, these plumes bring gold. In fact, there is likely a large percentage of the initial meteorite gold down in the mantle.

This is why mining companies sometimes come up short when it comes to pulling up gold and other precious metals at the mines.

A high percentage of the mineral was mined in the years leading up to and including the 1848 Gold Rush. According to one source, just over 125,000 tons have been mined since 1950.

So we aren’t “out” of gold, and likely won’t be for quite some time.

But the economically viable gold supply for mining companies might be at its “peak.” The rest may be too expensive to mine (until gold prices skyrocket, that is).

Goldcorp Chairman: “We’ve Found it All”

Mining companies are looking for new sources of gold to mine with the technology to mine it more efficiently than in the past.

But if the supply of gold isn’t where it can profitably be mined, then mining activity will drop and gold prices will naturally rise due to supply changes.

It’s for this reason Ian Telfer, Chairman of Goldcorp, thinks we’ve reached “peak gold” and are coming down the other side of the gold mining mountain.

So 2018 could be the beginning of a gold mining “drought.” Telfer thinks this drought will set in motion market conditions that will drive gold past $1600 per ounce.

Telfer believes this despite gold’s recent performance, dipping below $1300 an ounce. But when you look at the chart below, the last time gold dipped like this was 2008: 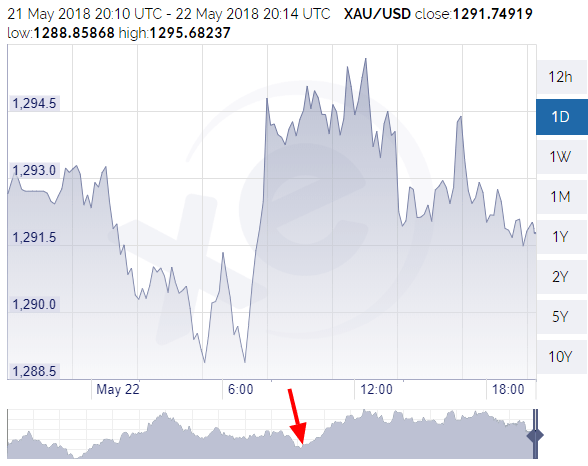 Interesting coincidence. And Telfer continued by saying it’s “hard to say” the deposits are running out, but that “it’s starting to look that way.”

It sure is. Mine production at Goldcorp and other peer companies seems to be dropping, according to the same Financial Post report:

At Goldcorp, production has dropped off since 2015 when it produced 3.4 million ounces of gold. It produced 2.8 million in 2016 and 2.5 million last year. Industry peers Barrick Gold Corp. and Newmont Mining Corp. have also experienced declines from their peak production earlier this century.

But Telfer isn’t the only canary in the coal mine…

“Peak Gold” May be Biggest Economic Story Not Being Reported

In South Africa, gold production has been declining rapidly since peak production was reached in 2015 (see right side of chart below): 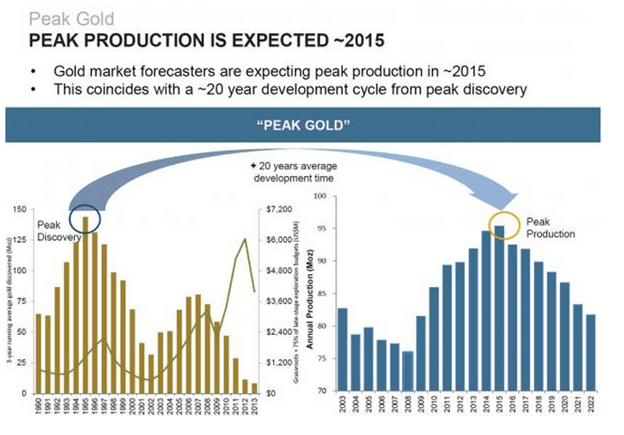 This may be a good indicator of the global gold mining trend identified by Mr. Telfer and others, like Vitaly Nesis, Kevin Dushnisky, and Nick Holland reported at Mining.com (emphasis ours):

Vitaly Nesis, CEO of Polymetal: “… The fourth quarter last year was in my opinion the peak quarter for fresh global mine supply. … I think supply will drop by 15 to 20 per cent over the next three to four years.”

Nick Holland, chief executive of Gold Fields: “We were all talking about how production was going to increase every year. I think those days are probably gone …”

With the lack of media attention, “peak gold” could be the most under-reported economic story of 2018.

But don’t let that stop you from getting prepared.

It’s Time to Set Yourself Up for “Peak Portfolio”

A spike in gold exploration spending between 2006 – 2008 created the conditions for mining companies to boost production over the last decade.

But we’ve reached peak production, and are headed down “Gold Mining Mountain.” With supply down, prices for gold will likely be on the rise.

As we mentioned last week, a strategist at Bank of America says gold may be headed for $1,450/oz. Now, the Chairman of Goldcorp is saying $1,600/oz.

Whatever prediction plays out, gold is sitting pretty. It’s best to get ahead of the crowd before everyone starts scrambling for gold..