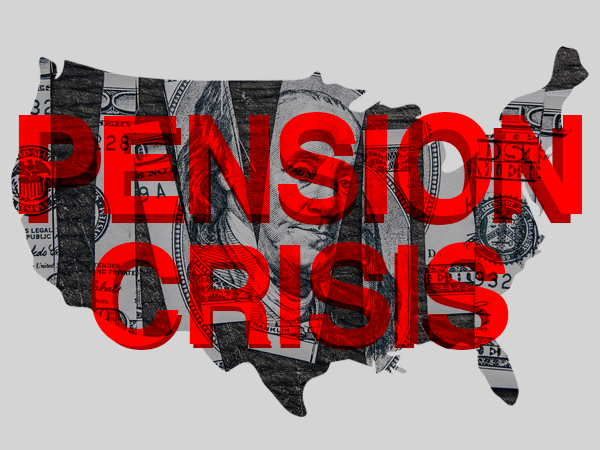 A commonly used cliché in investing is “Don’t put all of your eggs in one basket.”

If most (or worse, all) of your retirement “eggs” are relying on a pension plan, now would be the time to consider diversifying.

Short of a miracle, pensions are on their way out. Some experts believe they have been doomed since 2008.

At the state level, Governments all across the country are raising taxes to account for pension shortfalls that have been plaguing state economies for decades.

For example, back in March New Jersey Governor Phil Murphy proposed taxing “everything” (emphasis ours):

But as we reported earlier this year, New Jersey is having serious financial challenges.

And it’s important to remember that millionaires can move out of the state, taking with them a big chunk of tax revenue that could fund New Jersey’s already broken pension system.

As a country, the U.S. pension shortfall is nearing $7 trillion. Sovereign Man reported how bad the situation was back in March of this year:

The US pension system is beyond repair. And if you’re depending on pension income to carry you through retirement, it’s time to consider a Plan B.

And it doesn’t matter if your pension is public or private, it could affect anyone with a pension plan. The pension crisis is out of control and likely can’t be recovered.

It’s looking like the pension crisis may escalate to a whole new level.

As you can see from the graph below from the World Economic Forum (WEC), the clock is ticking for pension plans worldwide: 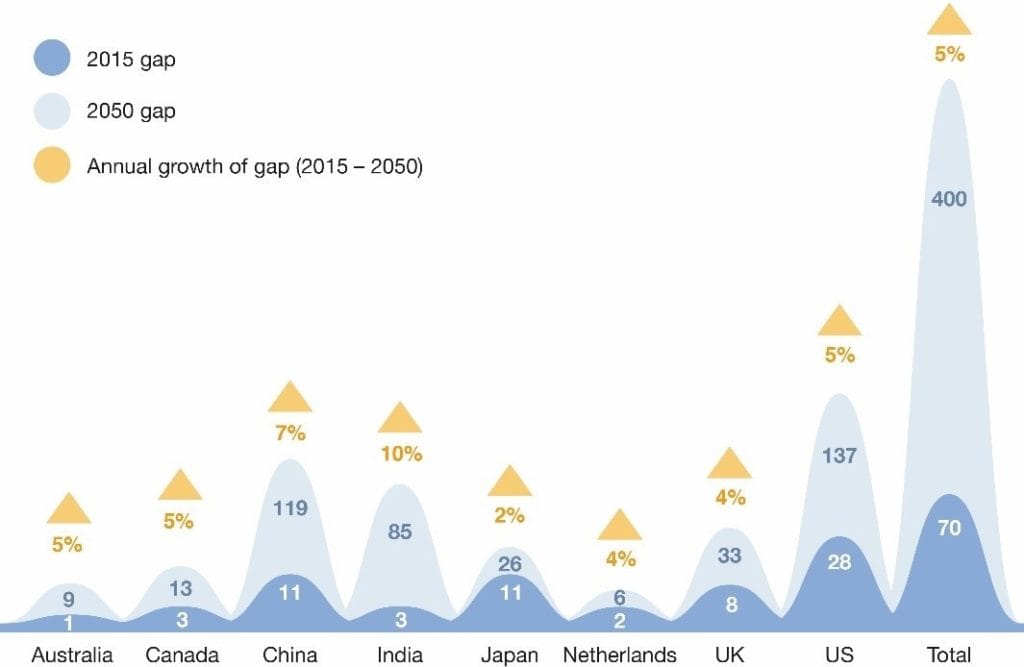 Not only is the worldwide total pension savings gap set to reach $400 trillion, an amount larger than 20 of the world’s largest economies, that gap is still growing 5% annually.

The WEC explains the gap as “the amount of money required in each country (including contributions from governments, individuals and employers) to provide each person with a retirement income equal to 70% of their pre-retirement income.”

A major problem, however, is the fact that low-income earners won’t survive at the “70% level.” If the pension system implodes, they could end up with nothing.

Adding fuel to the fire, there’s likely to be more retirees who could potentially live much longer lives, thanks to advances in medical technology.

Appropriately, Jacques Goulet, President of Health and Wealth at Mercer, thinks the pension problem has reached a “crisis point.”

Mr. Goulet may well be right, and the clock is ticking. But the proposed solutions to the pension problem seem desperate.

According to a recent Sovereign Man report, a “safety net pension for all” similar to U.S. Social Security was one proposed solution. Another proposed solution was to increase contribution rates, meaning younger workers pay more to support older retirees.

But as we’ve reported, Social Security benefits seem to be nearing “doomsday,” and there just aren’t enough people being born to keep retiree benefits afloat.

So no matter how you look at it, there is incredible financial pressure on a broken pension system.

It’s only a matter of time before the average person who depends on Social Security and their pension runs out of luck.

The Government won’t be able to save their retirement, so they’ll be on their own.

Pensions May Go Nuclear, But Your Retirement Can Have Firm Grounding

Most retirees don’t have a solid foundation if their pensions get cut or stopped. If you’re in the same boat, now is the best time to make changes.

Don’t let your retirement get demolished if your pension goes away. Assets such as physical silver and gold can add much needed diversity and stability to your portfolio in dire times.