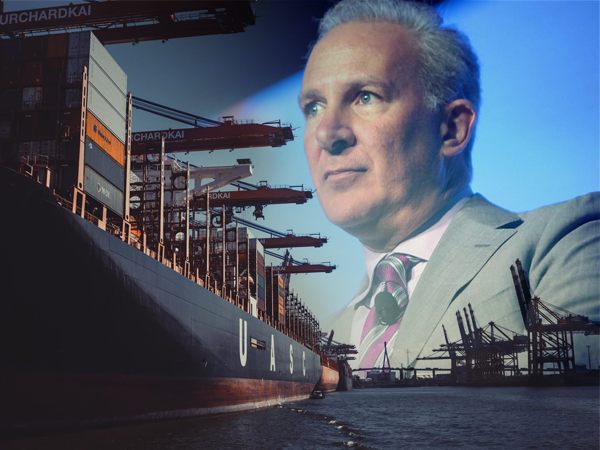 Political commentators are increasingly critical of U.S. trade policy, particularly tariffs and the trade war with China. Radio host Peter Schiff went so far as to compare U.S. trade policies to General Custer and the Battle of Little Bighorn. Meanwhile, some economic red flags seem to support their worries.

In today’s polarized political climate, there is one topic both the Left and the Right seem to agree on: the trade war with China is eventually going to hurt the average American.

Radio host Peter Schiff has been hammering on the economic dangers posed by tariffs for months. He even compared the resulting trade war with China to General Custer’s Last Stand.

“General George Custer met his doom charging into a battle he thought he could win against an opponent he did not understand. Based on [certain] views about the fast-emerging trade war with China, it looks to me that [the U.S.]…is charging into an economic version of Little Bighorn.

“By mistaking the real nature of international trade, the costs of tariffs, the effects of currency movements, and the supposed ease with which the United States could quickly re-establish itself as a low-cost manufacturer, [the U.S.] risks shredding the safety nets that have undergirded the U.S. economy for decades and plunging us into a war we are ill-equipped to fight.”

Those are strong words. But is Schiff’s Little Bighorn analogy accurate? Are these tariffs pushing the U.S. toward a disastrous economic “ambush” that could devastate America’s economy? Let’s look at some economic indicators to see what they point to.

Marc Chandler, chief market strategist at Bannockburn, agrees that China’s recent currency devaluation is part of an escalating trade war: “This is another step in the currency war. This also makes trade more difficult.”

Many see China’s currency devaluation as an intentional move to gain an unfair advantage in international trade. The U.S. Treasury Department agrees with this view, and has now designated China as a “currency manipulator,” something no White House has done since the Clinton administration.

Maybe this is why, after China’s latest currency action, President Trump sent out this tweet:

Investment bank Goldman Sachs released a statement through their chief economist Jan Hatzius on August 11, saying, “We have increased our estimate of the growth impact of the trade war.” They see fourth quarter growth possibly dropping to 1.8 percent, while their calculation of the cumulative hit on the nation’s gross domestic product to be at 0.6 percent.

Hatzius went on to say, “Fears that the trade war will trigger a recession are growing.”

If the U.S. “follows through with 10 percent [tariffs] on $300 billion, and the tariffs stay there, the impact by the end of 2020 will be 0.7 percent,” said Zandi. “That’s the difference between an economy growing at its potential and one that’s growing below it.”

Job gains just one year ago were humming along at 225,000 a month. Today, the U.S. economy is down to 140,000 jobs per month. Zandi warns that the economy must have sustained job gains of 100,000 a month to keep unemployment “in equilibrium.”

But as recently as July, The New York Times reported strong job growth:

“Job growth rebounded sharply in June. Employers added 224,000 jobs, a larger figure than expected. And manufacturers […] added jobs at the fastest pace since January. The strength of the United States economy stands in stark contrast to weakness overseas.”

Given these conflicting views on the strength of the jobs market, one thing is sure: the economy may be on shakier ground today than in the recent past. Whether job growth remains high or falls below “equilibrium” remains to be seen.

According to Kiplinger’s latest forecast on inflation, core inflation (which does not include the cost of food or energy) has increased for the second month. Kiplinger attributes the stronger inflation rate to “increases in medical-care services, along with goods prices, because of higher higher tariffs on imports from China that took effect in recent months.” They expect inflation to be at 2.3% in 2019, up from 1.9% in 2018.

How You Can Survive the Trade War

Trade wars and the effects of international trade policy are rarely predictable. Whether through currency manipulation, jobs growth, or rising prices, China’s actions have both the potential to help and hurt the U.S. economy.

Fortunately, at Birch Gold, we provide information that Americans need to survive and thrive as the U.S. continues to deal with an ongoing trade war with China.

We provide not only information — we offer solutions. Solutions that can shore-up your retirement so it can weather the uncertainty ahead.

A diversified portfolio is an important strategy for preventing unwelcome surprises from wiping out your retirement. Holding physical assets such as gold and silver can help protect your retirement savings as the trade war with China rages on. When the dust settles, will your retirement be left standing?