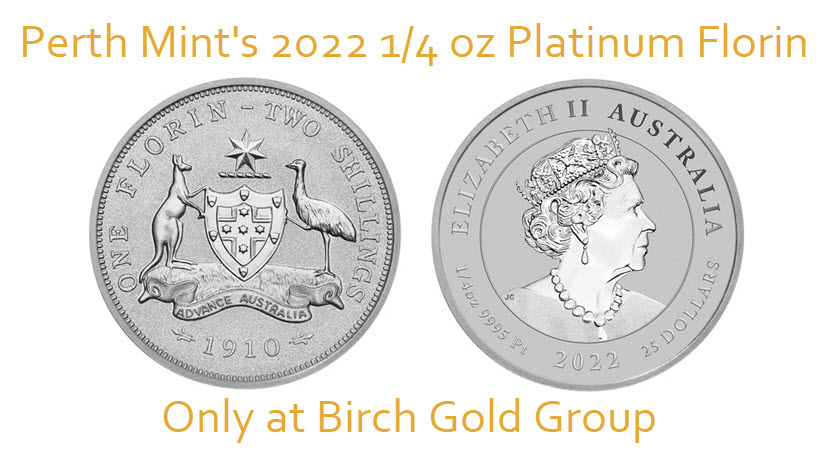 The Perth Mint has issued yet another homage to the original Australian florins struck in 1910, this time, a fixed-mintage 1/4 oz 0.9995 pure platinum florin, joining 2021’s 2 oz silver florin and  1/4 oz gold florin. Once again, Birch Gold Group has been named the sole authorized dealer for this piece of history.

The coin’s reverse features the first Australian Commonwealth Coat of Arms. A shield bearing the Cross of St. George and five six-pointed stars is supported by a kangaroo on the left and an emu on the right. The kangaroo and the emu might look out of place compared to the typically regal animals we find in heraldry (look at the Saint Helena silver standing lion guinea, for example). From the very beginning, Australia set out to define itself as part of the Empire, but not the same as the Empire. This original and somewhat cheeky William Henry James Blakemore design from 1910 makes this clear!

Above the coat of arms, you’ll note the seven-pointed star symbolizing the Federation – the agreement of the six separate British self-governing colonies of Queensland, New South Wales, Victoria, Tasmania, South Australia, and Western Australia to unite as a single nation. Below the shield, a banner emblazoned with the words ADVANCE AUSTRALIA forms the bottom border of the coin. The date “1910” is also prominently featured on the reverse, harkening back to the first year of Perth Mint’s operations as a government mint.

The obverse displays Her Majesty Queen Elizabeth II as portrayed by renowned designer Jody Clark in the so-called “fifth portrait” of the Queen. (Unlike the portraits used in British coins, Australia’s designs include Her Majesty’s shoulders and the coronation necklace she received upon her ascension to the throne in 1952.) She’s depicted as a mature leader gazing into the future, wearing her coronation crown in honor of her role as the longest reigning monarch in British history.

British monarchs have a long history of celebrating jubilee years over the last two centuries. Queen Victoria, the longest-reigning monarch (until surpassed by Queen Elizabeth II in 2015) celebrated both a Golden and a Diamond Jubilee to mark 50 and 60 years of her reign respectively.

Queen Elizabeth II is the longest-reigning monarch in nearly 1,000 years of British history – and in June 2022, Her Majesty and her people celebrated a Platinum Jubilee in honor of her 70 years on the throne.

Such a once-in-a-lifetime event makes the Perth Mint’s platinum florin an even more-desirable item. And its fixed mintage status is likely to make this fractional platinum coin a must-have, especially for completists.

At this unusual fractional weight, the 1/4 oz platinum florin offers an excellent opportunity to diversify both the weights and the growth opportunities in a precious metals IRA.

But you won’t find this platinum florin just anywhere. Birch Gold Group was selected by Perth Mint as the sole authorized distributor of this unique coin.