The Real Reasons Central Banks Buy Gold (This May Surprise You) 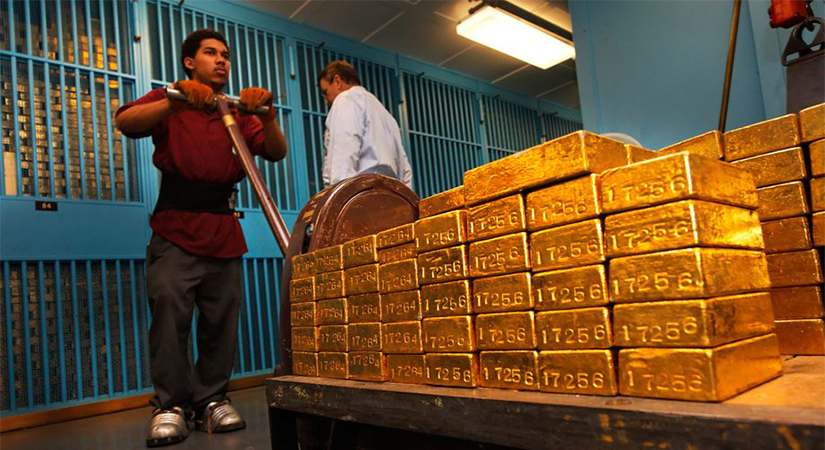 This week, Your News to Know rounds up the latest top stories involving gold and the overall economy. Stories include: What’s making gold the best all-weather investment, optimal allocation to silver in a portfolio, and John Paulson’s frequent gold references.

Vikram Dhawan, a fund manager with the Nippon India Mutual Fund, talked to Money Control about gold and why it continues to be an essential ingredient in every well-diversified investment account. As Dhawan points out, investors might be quick to jump on gold’s price decline since March. However, Dhawan encourages a slightly longer-term perspective:

Gold has gone up by almost 70-80% in the last five years and almost doubled from the lows of 2016… [and] still remains undervalued against most front-line assets like equity and other commodities with the exception of steel and silver.

Dhawan is among many experts who note that gold’s run actually started in 2016. As he explains, massive purchases by global central banks played an important role.

Now, this is an interesting point, and I want to dig a little deeper here. Last week, my friend Dr. Ron Paul told us about Ben Bernanke’s “gold confession.” That got me thinking about world central banks – why do they keep buying gold? I understand why everyday Americans want to diversify their savings with gold and other precious metals. I’ve never had the privilege of meeting a central banker, though. So I did a little research, and here’s what I found…

According to research dating from June, four of the top five reasons central banks buy gold may seem familiar to you:

That’s right – central banks buy gold for the same reasons everyone else does. That doesn’t really surprise me although admittedly it’s interesting to see the central banks themselves admit their motives.

During the pandemic panic, gold skyrocketed on safe haven demand. Since then, Dhawan says the spikes in gold’s price caused by the panic have declined. “Eventually, fundamentals take hold,” he said. “But since investment flows tend to be concentrated in smaller periods of time, they tend to amplify price swings.”

Despite the price drop since its pandemic panic all-time high, gold remains ahead of most “front-line assets” during an apparent downturn. The only exceptions Dhawan lists specifically are also both commodities silver and (oddly, in my mind) steel. Admittedly it would be challenging to invest in physical steel right now – you’d need 2 1/4 tons of hot-rolled coil steel (and someplace to keep it out of the rain) to match the value of a 1 oz American gold eagle. Yet another reason central banks buy gold.

Regardless of price swings over the past two years, Dhawan finds gold undervalued from a historical standpoint. He believes the market is still trading on sentiment, and that eventually fundamentals will return as the dominant driver of gold’s price.

When it comes to diversification with gold, Dhawan believes your allocation to gold should depend on your risk exposure, time horizon and your other investments.

If one’s portfolio is more skewed towards risky assets in the equity market, gold acts as a hedge. On the other hand, for investors who choose to park their savings in fixed deposits and debt instruments, gold averages out the performance especially during times of stress.

Dhawan believes “How much gold do I need?” is a far less important decision than choosing to diversify with gold in the first place. Once you’ve taken that first step, you can always fine-tune your level of investment. Like with many things in life, the first step is the hardest.

Long-time gold investors can take comfort that, as much as we get caught up in incremental price movements,  they are only a small part of a stable, centuries-old market.

Dhawan reminds us that a few years of price movements up or down won’t really change the long-term trajectory of gold’s price. Remember, one of the major reasons both central banks and everyday American families diversify with gold is for its reliability as a “long term store of value.” Although each word in that phrase is important, don’t overlook “long term.” Watching the minute-by-minute price movements of any investment can absolutely ruin a perfectly good day. I believe one of the major benefits of diversifying with gold is you can just tune out the noise with the confidence that you own a “long term store of value.”

Regardless of the price per ounce you pay, the feeling of security is priceless.

How much silver should you own? Finally, a research-based answer

We hear a lot about the optimal gold allocation. Moderate portfolio managers almost invariably recommend 5-10%. Those with an affinity for gold or a real fear of crisis talk about diversification ranging from 20-50%.

But what about silver? Diversifying within precious metals, hedging one against another, is a sound decision backed by research. It’s well-known that silver has a much lower price per ounce. In fact, both platinum and palladium share silver’s high volatility compared to gold – and therefore, potentially, offer greater returns.

The Silver Institute asked Oxford Economics to try and determine the optimal portfolio allocation to silver. The overall study embraces a wide range of assets (including gold) from January 1999 to June 2022..

After running a lot of simulations, Oxford Economics determined that a 4%-5% allocation to silver, over a 5-year period, was ideal based on historical performance.

Over a ten-year window, optimal allocation to silver should depend on the individual’s overall risk tolerance: 5.6% for low risk, 6% for medium risk and 5.8% for high risk.

As much as we know about gold’s lack of correlation with traditional assets like stocks and bonds, Oxford Economics found that silver also has a mostly low correlation with other financial assets.

Why? As the report details, over half of silver demand comes from industrial and manufacturing applications. Obviously these are pro-cyclical sectors, meaning they generally do well when the economy does well and vice versa. Silver’s heavy industrial demand adds quite a bit of volatility and subsequent room for gains.

The report also mentions a belief that these industrial applications could see the gold/silver ratio begin to normalize after a lengthy period of being askew in favor of the former.

Gold is one of John Paulson’s preferred investments

Fund manager John Paulson is known for his distaste in popular assets. His shorting of the housing market not only went against the trend, but also turned out to be quite profitable. These days, he even dislikes crypto, though he admits he dares not short it due to the massive upside.

One asset whose prudence Paulson has no issue touting is gold. Even when high inflation was somewhat questionable, Paulson said it could be in the books and that a run towards gold could bring about a massive jump due to supply-and-demand dynamics.

These days, Paulson is again bearish on housing, though stops short of calling it something that could trigger a financial crisis as it did in 2007 and 2008. Data seems to disagree, however. In just a few years, home prices in the U.S. surged by over 40%, and long-term mortgage rates recently passed 6% for the first time since 2008.

Interestingly enough, Paulson seems keen to call stocks a “pump-and-dump scheme” than cryptocurrencies. He notes that short sellers talk up equities to retail investors with insufficient knowledge, then talk them down so the stocks plummet, and the short sellers turn a profit.

As for gold, Paulson forecasted that persistent inflation would necessitate higher rates and cause a move away from cash and bonds into gold. This suggests he might be expecting the price to surge in the near-term. He likewise highlighted that gold has posted smaller losses this year compared to either stocks or bonds.

One thing Paulson is keeping an eye on in the gold market is how fruitful the Fed’s efforts to combat inflation are. Should they fail, it will result in a loss of confidence in the central bank, increase inflation expectations and further strengthen the long-term case for gold – not that gold’s long-term prospects need any strengthening.