Recession Alert: Canary in the Economic Coal Mine Just Choked on Crude Oil 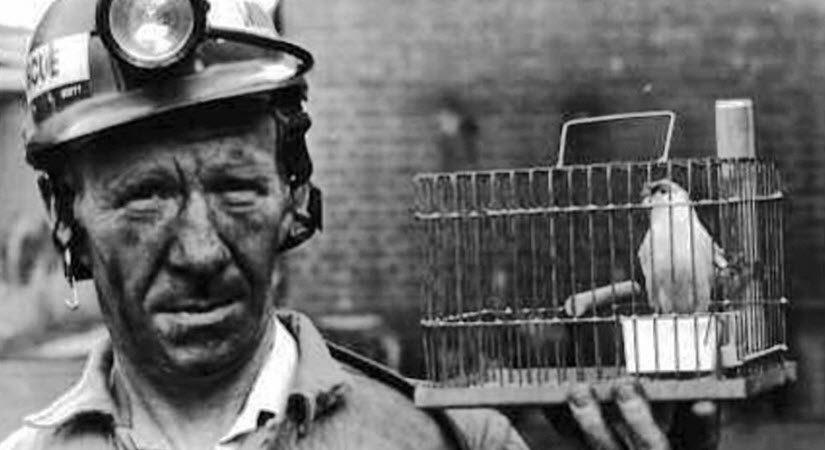 A market crash is typically short term, while a market recession (like the Great Recession) could last a lot longer.

Of course, there aren’t any hard and fast rules, but neither a crash nor a recession are events those of us closing in on retirement should get excited about.

Now, with inflation accelerating even faster in February 2022 (7.9% over last year), consumers are suffering the highest rate in 40 years.

On top of that, the stock market is still overvalued according to most historical benchmarks, despite the Dow shedding nearly 10% since January 4th of this year.

Then there’s the Fed. It appears to be building a “stairway” to economic ruin, adding about $2 trillion in balance sheet assets since July 2020 (see chart below):

And that stairway to heaven (or hell?) in the upper righthand corner, the one that’s about to hit nine million million dollars, represents the total assets on that bulging out-of-balance sheet. Billions and billions of freshly inked dollars… chasing an increasingly strained supply of goods…

Call it another “uh-oh” data point.

You might even say that the data points summarized above are enough of an economic “canary in the coal mine” for a near-term recession.

Unfortunately, that canary could also be “choking” on skyrocketing oil prices.

Crude at $200? One trader says, “Anything could happen”

Federal Reserve Chairman Powell continues to claim that “rate increases” will contain out-of-control price inflation, even in the face of the Ukraine/Russia conflict.

But Powell now has a new problem to contend with, surging crude oil prices which have spiked 50% in the last few days.

And a 50% rise in crude oil prices is particularly concerning. You can see why this is alarming on the chart below. 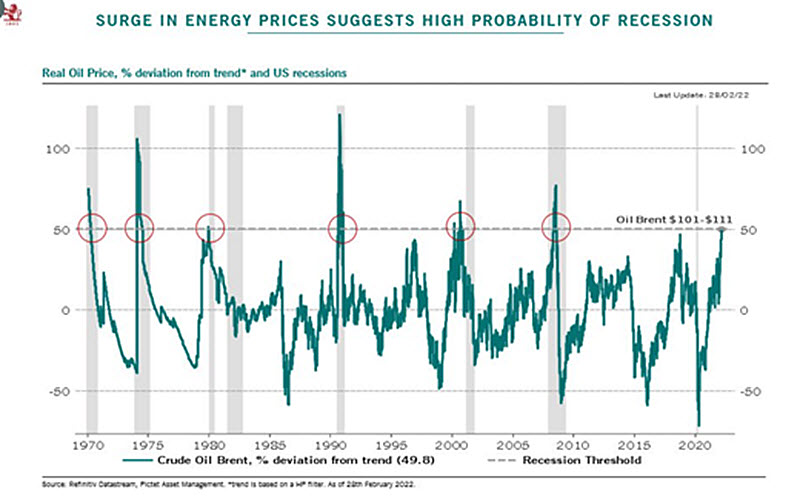 Take note of each red circled oil price spike of 50% or more since 1970 that coincides with a severe market correction (the most recent isn’t circled yet).

Powell is aware of the economic effects an oil shock like this can have. He attempted to explain their effects on the economy:

Ten dollars of oil is like two-tenths of inflation and economic growth, it’s more like one-tenth. […] Certainly, in the near term gas prices will go up. There’ll be effects on inflation and it all comes down to how persistent they will be.

But it could get worse…

In a recent research note, JP Morgan analysts say something even more alarming: Brent crude could end the year at $185 a barrel if Russian supply continues to be disrupted.

If the markets are that insane, where anything could happen, it might be a good time to protect your financial future from a major storm in 2022.

Gold and silver could be good safe havens

There is no question that the markets are more volatile right now thanks in part to the Russia-Ukraine conflict, according to Jim Wyckoff:

Global stock markets and the U.S. stock indexes are still on shaky ground amid the biggest geopolitical crisis in decades that appears to be worsening. Some hot U.S. inflation data today was also bullish for the metals markets.

We mentioned above the Dow has lost about 10% since January 4th. During that same period, January 4 – March 11, gold’s price has risen 10%. Silver has risen 10.5%. That’s exactly the kind of performance you would expect from a safe haven investment.

If you’re concerned about the vast economic damage rising oil prices could have, and you also see a recession on the horizon, now might be a good time to consider whether your savings are properly diversified.

Consider how 7.9% year-over-year inflation will affect your savings and your future purchasing power. We have a guide to inflation-resistant assets to help you decide how to preserve your purchasing power, especially during economic turmoil.

Think about your exposure to volatile (and arguably overvalued) paper assets. Consider learning how gold performs over time and the benefits of a well-diversified savings plan to help secure a stress-free retirement. Would knowing you have a portion of your savings invested in physical gold and silver help you tune out the economic news and sleep better at night?

For many everyday folks just like you, the answer is yes.