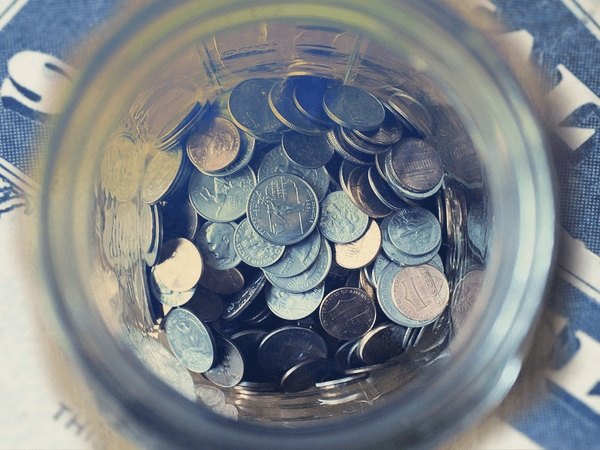 Long-term Social Security has a shortfall of $43 trillion (officially reported by the Board of Trustees), and an imminent benefit cut of 25% by 2034.

Despite these sobering facts, Social Security raised benefits for 8 million recipients by 2.8%, effective January of this year. On average, this means recipients will receive $39 more with each check.

On the surface, this cost-of-living-adjustment sounds good. And if the cost of energy, food, and other commodities remained the same (or declined), this would be a nice raise.

But those costs don’t stay the same. Inflation plays a critical role in determining how much of that “raise” you get to keep.

Legislation enacted in 1975 is supposed to protect Social Security recipients from rising inflation by factoring CPI-W into any cost of living adjustment. In a perfect world, the 2.8% increase would be above and beyond inflation.

But we don’t live in a perfect world. Overall inflation just jumped up to 1.9%, with rising food prices as the main cause according to official sources (see chart below). 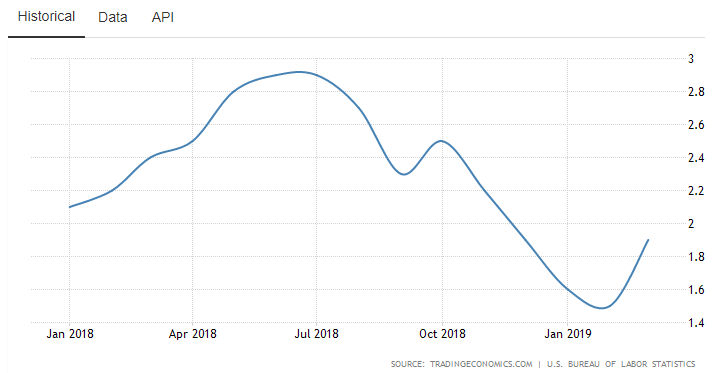 According to the Bureau of Labor and Statistics, the official explanation for this jump highlights an increase in just about every item of importance (emphasis ours):

On a monthly basis, consumer prices rose 0.4 percent in March, the biggest advance since January 2018, following a 0.2 percent gain in February and beating market expectations of 0.3 percent. The energy index increased 3.5 percent in March, accounting for about 60 percent of the increase, boosted by the gasoline and electricity indexes. The food index also increased in March, with the indexes for food at home and food away from home both continuing to rise. The indexes for shelter, medical care, new vehicles, recreation, education, and tobacco were among those that increased in March.

So prices for energy, food, shelter, and medical care are all on the rise. That begs the question for Social Security recipients…

Will $39 more per month (on average) cover rising indexes on five critical fronts?

The Fed’s approach will be to wait until “sub-par” inflation “rises convincingly” according to a recent Newsmax article:

The central bank has backed off the interest-rate hikes it had been delivering to avoid a potentially dangerous rise in inflation that economic theory says could result from the hot jobs market. Instead, Powell & Co. have put policy on hold until sub-par inflation rises convincingly.

This strategy appears to be working. Inflation is rising, but at the expense of retirees who count on being able to spend their cost of living adjustment. Instead, it appears to be absorbed right back into the system.

As if official inflation weren’t bad enough, “real” inflation may take an even bigger chunk of that “raise” in Social Security than Powell wants to acknowledge.

The truth is, the actual inflation rate is probably much higher than reported by the Fed. John Williams from Shadow Government Statistics explains:

The growing difference in perception versus reality primarily is due to changes made over decades as to how the CPI is calculated and defined by the government. Specifically, changes made to the definition of the CPI and related methodology in recent decades have reflected theoretical constructs offered by academia that have little relevance to the real-world use of the CPI by the general public. Importantly, the public usually has not been aware of or understood these changes.

The Shadowstats inflation chart shows the “real” world inflation using the methodology that was used in the 1990’s: 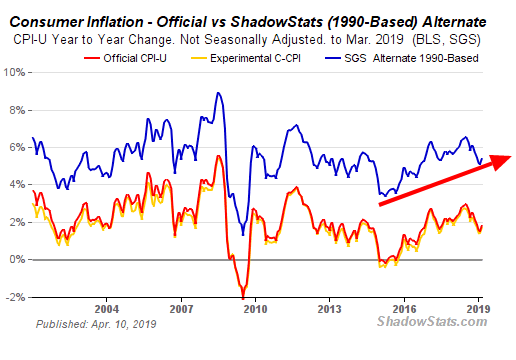 The red arrow highlights that while inflation has moderated slightly, it has been on the rise since 2015. The real inflation rate is shown closer to 5%.

Of course, the Fed doesn’t want to report the “real” world inflation rate, because it would make the COLA look like peanuts. And, according to Sovereign Man, it is peanuts:

Right now the Social Security trust funds have $2.9 trillion in assets. Yet they only earned a pitiful $83 billion in investment income last year, a return of roughly 2.8%.

That’s barely enough to keep up with inflation.

Don’t Rely on the Government’s “Raise”

Social Security is a nice supplement for your retirement plan. At times, they increase your benefit in an effort to offset inflation. But Social Security is in danger of being cut, or failing altogether, if nothing is done to rescue it by 2034.

And “real” world price inflation poses ever-increasing challenges to the ability to retire on Social Security and savings alone.

Don’t let inflation (real or otherwise) drive your retirement into an early grave. Consider adding to your portfolio precious metals such as gold and silver which act as hedges against inflation. When prices begin to soar, you’ll want a tool that can help you maintain a lifestyle you worked for.