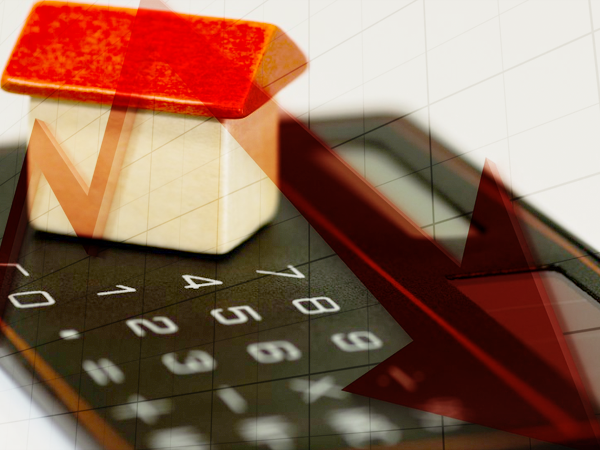 It looks like the mortgage industry forgot the dire lesson they learned about risky lending during the 2008 Financial Crisis. Unfortunately, that amnesia may lead the U.S. into the next crisis.

Fox Business crystallized this thinking in a recent piece:

Considering that just a decade ago home loans caused the worst financial crisis since the Great Depression, this news has many experts worried. “This is something I’ve been worried about for a long time,” GraniteShares CEO Will Rhind told FOX Business’ “Cavuto: Coast To Coast.”

Will Rhind continued with a dire warning about the “hidden” danger this recent trend in risky mortgages presents:

You have a situation where yields have come so low, everybody’s trying to stretch for some kind of yield which has pushed a huge amount of money in the private credit markets, which is sort of less visible than the public markets.

You would think these risky mortgage loans would be limited by legislation created after the last financial crisis a decade ago. But according to a chart on Realtor.com, they’re actually on the rise: 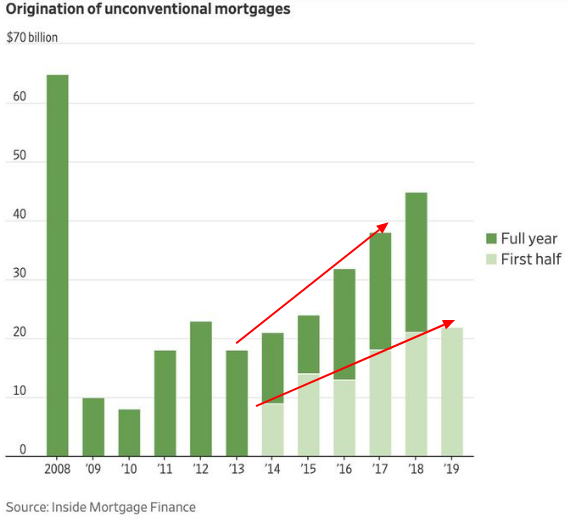 As you can see in the chart above, both first-half and full-year trends in origination of unconventional mortgages are on the rise.

Not only are they on the rise, but according to Realtor.com, these “unconventional” mortgages seem to be a repackaged version of the same type that partially caused the Great Recession:

Largely gone are the monikers subprime and Alt-A, a type of mortgage that earned the nickname “liar loan” because so many borrowers faked their income and assets. Now they are called non-qualified, or non-QM, because they don’t comply with postcrisis standards set by the Consumer Financial Protection Bureau for preventing borrowers from getting loans they can’t afford.

To make matters even more complicated, $2.5 billion of these subprime loans were sold in 1Q2019 mortgage bonds. This is “more than double a year earlier and the highest level since the end of 2007,” according to Inside Mortgage Finance.

According to a recent op-ed on the National Association of Mortgage Underwriters (NAMU) website, the FHA revealed some staggering data about borrowers at the end of the first quarter in 2019 (emphasis ours):

If the thought of subprime borrowers with stretched budgets taking out mortgages sounds familiar, the script is eerily similar to 2008.

With homebuyers working the same for less home-buying power, you would think any signal from the subprime credit markets would trigger panic.

Unfortunately, that doesn’t appear to be the case. In fact, even the FDIC has issued a general warning to banks that are using “looser underwriting standards” to issue loans amid slower growth in the credit markets:

With competition for loans increasing amid slower growth, the FDIC noted that ‘market demand for higher-yielding leveraged loan and corporate bond products has resulted in looser underwriting standards.’ Banks that are highly exposed to volatile sectors—such as agriculture, commercial real estate or corporate debt—could be particularly susceptible to fluctuations in the market, the FDIC said.

That same trend appears to be developing at a deeper level with increasing issuances of subprime mortgages, as indicated in the chart above.

But this isn’t a newly developing trend. In fact, the New York Times was signaling it just last year:

But lenders are starting to push the loans on borrowers, who are using them to get into homes that may be bigger and more expensive than what they could otherwise afford.

And according to Wolf Richter, even with record low rates for qualified buyers, which should help the mortgage markets soar, home prices are falling and inventories are increasing:

With this quantity of inventory for sale, homebuilders will be motivated to do what they can to keep supply from rising further or worse, spiking – as seen during the housing bust.

So we may have a housing bubble that bursts on top of a subprime mortgage crisis. Neither one of these are good. And if both happen, it would be a disaster.

The signals are there. If the U.S. is steering a ship into port, and it ignores the lighthouse, the U.S. economy could end up crashing on the rocks.

It sure seems like old lending habits die hard. Insanity has been defined as “doing the same thing over and over and expecting a different result each time,” which is what’s happening here.

Only time will tell what will actually happen in the credit markets, but all of the signals are pointing to an economic roller coaster with steep drops ahead.

So start preparing yourself for the worst. You can get started by hedging your bets.

Diversify your portfolio with assets known for protecting your wealth, like gold and silver. But start protecting your savings now to lessen your risk of being exposed to similar damages from 2008.