Ron Paul: The Time Ben Bernanke Shocked Me With This Gold Confession 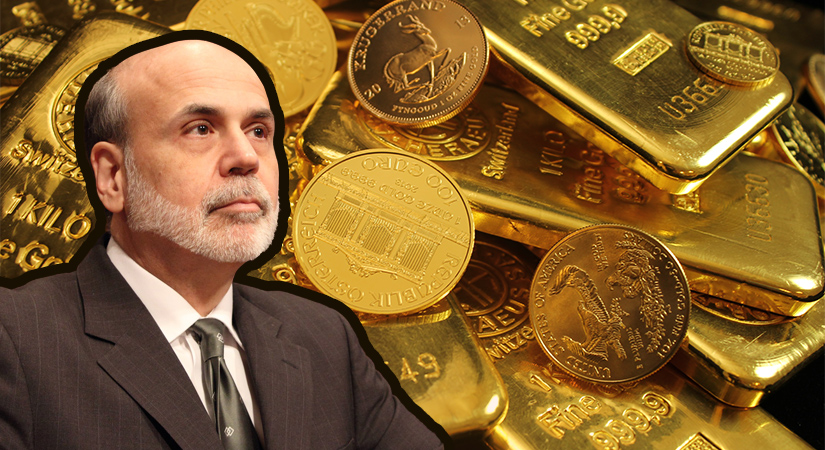 Composite image from original photos by Zlaťáky.cz and Shirley Li/Medill

Recently, my friends at Birch Gold Group asked me about some of my more infuriating confrontations with the Federal Reserve. This one immediately sprung to mind…

Back in July of 2011, in the aftermath of the Great Financial Crisis, I served as the Chairman of the Financial Services Subcommittee on Monetary Policy (basically, the Federal Reserve watchdog). I was seriously concerned about the Fed’s ongoing “quantitative easing,” injecting trillions of dollars into the U.S. economy and the subsequent decline in the dollar’s purchasing power.

Here, take a look at this chart that starts just before the Great Financial Crisis and runs through today, and tell me whether the blue line (dollar strength) goes down when the red line (dollar supply) goes up:

Well, most hard-working Americans don’t directly control how much money they make. They do their best at their jobs, or run their businesses as efficiently as possible – but they can’t “make” money – they earn it.

The Federal Reserve, on the other hand, is the only institution in the world that can literally “make” or print U.S. dollars!

Printing more dollars doesn’t make more wealth. It just makes more dollars, which lowers the value of every other dollar in the world. We call this “inflation.”

Gold isn’t money? Then why do central banks have so much of it?

In this exchange I was trying to corner Mr. Bernanke into admitting that gold is, in fact, money – which is why global central banks all have stockpiles of gold bullion.

Here’s how that dialogue went:

Just to be clear, here’s a financial definition of an asset:

An asset is a resource with economic value that an individual, corporation, or country owns or controls with the expectation that it will provide a future benefit.

Here’s a financial definition of reserves:

Reserves, in the world of business and finance, refers to ‘money in hand’ – money that is available to be used for a wide range of possibilities, including meeting future planned payments, unexpected events, emergencies, opportunities, etc. They are funds that individuals, companies, organizations, central banks, and governments set aside for future use or ‘just in case.’

To me, this whole exchange felt like he was dancing around the issue. It reminded me of a famously shameful moment in our nation’s history when a sitting President said, “It depends on what the meaning of the word ‘is’ is.”

The chairman of the central bank of the United States of America is deliberately quibbling with me because he wants to avoid admitting that gold is money!

It’s pretty clear to me that even he believed that gold is a form of money, but didn’t want to admit it. Now, why on earth might that be?

I’ll tell you why…Over the last 34 years, the U.S. gold reserve hasn’t changed. The supply of dollars, on the other hand? The number of dollars has gone up more than five-fold.

If Bernanke had admitted that gold is money, he would’ve had to explain how the same amount of gold was able to back a limitless supply of U.S. dollars! He knew he couldn’t say that – because that would topple the entire house of cards.

So instead, he merely denied that gold is money per se (while admitting it’s both an asset and a form of reserves.)

You get used to people misleading you and dancing around important questions in Washington, D.C. but this particular exchange sticks with me.

Bernanke admits gold is “a protection”

Now, I’ll be the first to admit this surprised me.

When I asked Bernanke whether he followed the price of gold, I expected him to shrug the question off. But he didn’t. Instead, he supported one of the most important reasons that people buy gold.

Here’s that part of the exchange, with the important parts in bold:

Me: When you wake up in the morning, do you care about the price of gold?

Bernanke: Well, I pay attention to the price of gold but I think it reflects a lot of things. It reflects global uncertainties. I think people are, the reason people hold gold is as a protection against what we call tail risk, really really bad outcomes. And to the extent that the last few years have made people more worried about the potential of a major crisis, then they have gold as a protection.

Now, even though he’d never, ever admit that gold is money, not even the head of the Federal Reserve would try to argue against gold as protection against what he called “really really bad outcomes.”

And that’s exactly why world central banks have so much gold! The same way gold is a protection for individuals, for everyday folks like you and me, against “really really bad outcomes” – well, it works exactly the same way on an international level.

Global central banks have gold because it’s a liquid asset they can rely on even when everything else falls apart. You can’t wave a magic wand over gold and make more of it.

Ultimately, I think what Bernanke was trying to communicate was that gold is a protection, but not for you and me. Sure, central banks around the world have owned gold as a “long-term tradition” for centuries – but if American families diversified their savings with gold instead of throwing their hard-earned money at the stock market casino, well, that takes power away from the Federal Reserve!

Bernanke wanted Americans to invest in financial markets – to speculate, to consume and buy into the myth of perpetual economic growth.

Personally, I think it’s much more prudent to make sure at least some portion of your savings is secured in an asset like physical gold. An asset the Fed won’t admit is money simply because they can’t control it.

Remember, the Federal Reserve is the only institution on earth that can make dollars. I would argue that printing dollars is not the same thing as making money – and it’s far from “earning money” as well.

I believe Bernanke’s insistence that gold isn’t money was no more than an admission that gold was outside his control. And, if you’re like me, you’d prefer to have your savings diversified with “an asset” that has a “long-term tradition” as a stable store of value. One that the Federal Reserve can’t control, manipulate, inflate or print.

If you’re interested, you can watch the full exchange between Chair Bernanke and me here: