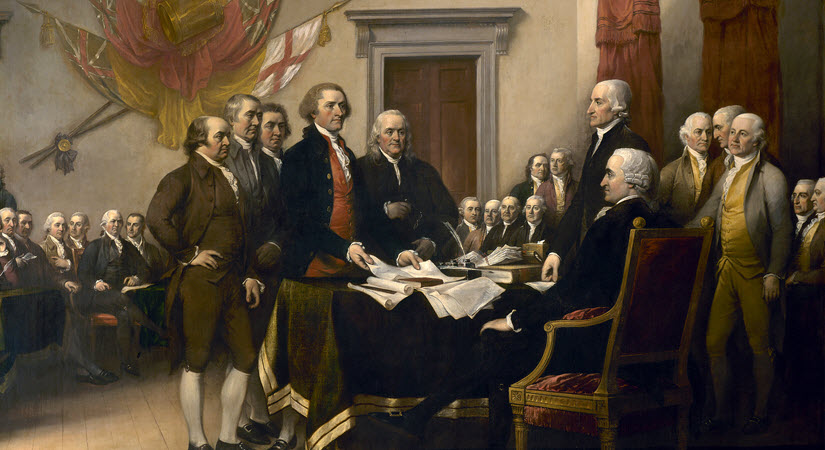 Today, we’re seeing 40-year record inflation thanks to a combination of irresponsible monetary and fiscal policies. I’ve spoken to a lot of Americans who are seriously worried we’ll see a destructive bout of hyperinflation.

If we do, you may be surprised to learn it won’t be the first time…

Today I’m going to tell you the story of America’s first hyperinflationary episode. Our Founding Fathers learned a crucial lesson from it, and tried to ensure it wouldn’t happen again…

During our own nation’s Revolutionary War in 1775, the Continental Congress legalized the printing of paper money. Politicians thought there wasn’t enough specie (real, or gold and silver) money in the entire nation, so they decided to make their own.

Historians estimate that just $10 million in real money was circulating in the U.S. at the time. So Congress authorized IOUs to be used as money. They paid for food and horses and weapons, even paid soldiers in “continental currency.”

Image via University of Delaware

You’ll observe there’s a clear value of “TWENTY Spanish milled dollars or the value thereof in gold or silver.” Well, Congress had promised to begin redeeming this paper money in the future – as early as 1779.

Presumably, the war would be over by then, one way or another! Either the entire Continental Congress would be hanged by General Howe or Sir Thomas Gage as traitors, or General Washington would’ve kicked the monarchists out. After the war was over, Congress decided, they’d have plenty of time to figure out ways to tax their citizens and make good on the promises all this paper money made.

As you might remember from high school, the Revolutionary War was still going strong in 1779. The Continental Army suffered a truly awful winter in Valley Forge, morale was poor, public support was lower than ever…

Also, Congress had gone just a little too far with their money-printing. They issued a total of $226 million in paper money. That’s right – they increased the money supply more than twenty-fold! What happens when you increase supply dramatically without a balance of increased demand? Value plummets – and by 1779 the Continental dollar was a joke. Our nation’s first paper money traded at about 5% of its face value if it was accepted at all.

By 1781, Continentals had become so worthless they simply weren’t circulated any more. No factory or shopkeeper or handyman would accept them as payment even at 1% of face value. Continental bills became bookmarks or toilet paper.

This sorry episode of our national history, paying patriotic volunteer soldiers in absolutely worthless paper money, caused an economic crisis as bad as the Great Depression! GDP shrank by a third.

The situation wasn’t stabilized until 1782. Congress appointed Robert Morris to the newly-invented position of Superintendent of Finance. Morris opened a bank, arranged a loan of gold and silver coins from France, and personally financed the war effort! He signed IOUs in his own name to get crucial materiel for the troops. Morris even opened the first U.S. Mint to begin producing the first official gold and silver coins for the U.S.

The U.S. won the war, finally. The last British troops didn’t board transports to set sail for home until November 25, 1783.

But our Founding Fathers had learned a valuable lesson. According to Robert Wright, Benjamin Franklin even caustically observed that the depreciation of the Continental had essentially acted as a tax on the population which financed the war.

Even though they weren’t economists (really there wasn’t such a thing back then), they’d seen the nation’s economy crippled by their experiments in what we’d call “Modern Monetary Theory” today.

So they did their very best to prevent such a disaster from ever happening again – in the Constitution itself.

How the Constitution tried to prevent inflation

The Constitutional Convention of 1787 includes the following text from Article I, Section 10, Clause 1 (also known as the  “Contract Clause”):

No State shall… coin Money; emit Bills of Credit; make any Thing but gold and silver Coin a Tender in Payment of Debts.

And Article I, Section 8, Clause 5 (the “Coinage Power” clause) states in part:

[The Congress shall have Power . . . ] To coin Money, regulate the Value thereof, and of foreign Coin, and fix the Standard of Weights and Measures…

When we consider these along with the Ninth and Tenth Amendments, we get a very clear picture of the Constitution’s monetary policies:

In other words, based on the Constitution, only gold and silver coins (or banknotes readily redeemable for such coins) can be accorded legal tender status.

See, the Founders learned their lesson! They explicitly prohibited the mistake of 1779 from ever happening again! They gave a young nation a plan to avoid the temptation of “printing money” and destroying its economy.

Current Federal law states that all “United States coins and currency (including Federal Reserve notes…) are legal tender for all debts, public charges, taxes, and dues.”

You may know “Federal Reserve notes” under another name. Today, we call them “dollars.”

According to our own Constitution, though, they are not dollars. The Founders saw first-hand how much trouble a government could cause by printing currency out of thin air and tried to prevent our elected leaders from making the same mistake.

I’m sad to say that our Founding Fathers failed.

The first time the U.S. experienced a hyperinflationary crisis, back in the 1780s, we were lucky enough to be bailed out by friendly nations. Remember, in the 1780s the U.S. was an economic backwater by world standards, with an economy smaller than Spain’s.

But this time our economy is about one million times larger. The U.S. national debt isn’t too big to fail, but it is too big to save. We can’t expect a last-minute loan of gold and silver coins from an allied nation to stabilize the economy and save the day.

We will very likely see hyperinflation again, and sooner than you think.

What can we do about it?

Well, the federal government doesn’t have any interest in stopping this collapse – just look at their addiction to deficit spending! President Biden has been touting his notion of “fiscal discipline” by praising himself for keeping deficit spending below $1 trillion this year. Yes, unbelievably, it was three times worse last year! Going broke more slowly is STILL GOING BROKE!

The Federal Reserve doesn’t have the power to stop it. They can raise interest rates as much as they want – which means more of the federal government’s tax income will be needed to cover interest payments on our nation’s over $30 trillion in debt.

It’s probably too late to save the Federal Reserve note from total collapse.

However, everyday Americans can take those Federal Reserve notes and trade them in for what our Founding Fathers would recognize as real money. Spanish milled dollars are thin on the ground – but the U.S. Mint makes an excellent substitute. The silver American eagle is a little heavier and a whole lot more beautiful than those old Spanish coins.

And, you know, this is a strange coincidence! The silver American eagle coin has an official U.S. government face value of $1.