Home » Blog » Russia Could Be Planning the Ultimate Gold Move

Russia Could Be Planning the Ultimate Gold Move 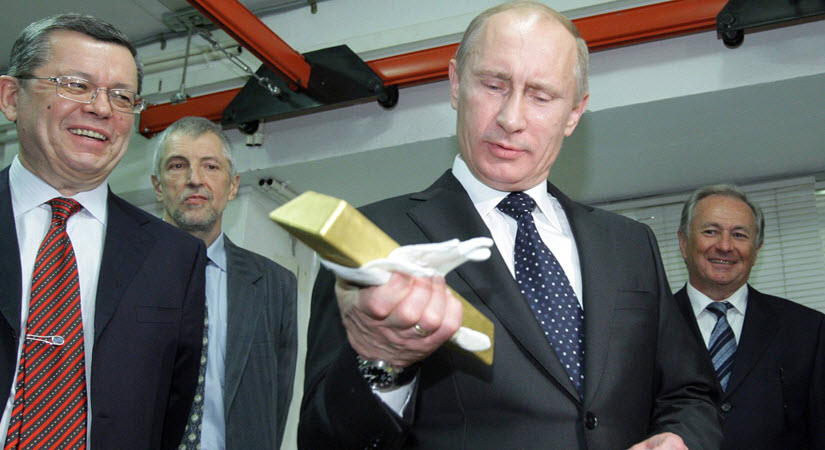 This week, Your News to Know rounds up the latest top stories involving gold and the overall economy. Stories include: Russia exemplifies the importance of having physical gold, the bullish considerations of gold’s pullback and gold’s diversification to come to special prominence.

Russia’s gold stockpile proving to be a safe haven

Say what you will about Russia’s government, you can’t deny they understand the importance of investing in physical gold. Accumulating $140 billion of an asset with zero counterparty risk was a smart move. And now it might be time to sell, and Russia’s gold bullion is likely to prove its merit once again.

Four weeks into its military action and with the ruble plunging to never-before-seen lows, it’s clear Russia will soon be needing funds. There have been plenty of attempts to stop Russia from liquidating its gold bullion, from outright bans such as the LBMA one to Western sanctions meant to deter banks and financial entities from doing business with the nation.

But anyone can tell you that gold bullion isn’t something that’s difficult to find a buyer for, irrespective of the amount or the source. CPM Group Managing Partner Jeff Christian said that India and China are examples of countries that could be interested in Russian gold, especially if it comes at a discount. Middle Eastern nations are possible buyers as well. No one seems too concerned about Western threats and warnings. The U.S. might look to impose even more stringent sanctions on potential buyers. China specifically is unlikely to risk U.S. economic retaliation, even if Russia offers a good deal.

Here’s the thing: Russia’s bullion is stored domestically. It’s difficult to envision a scenario where buyers wouldn’t want that gold. Possibly lured by discounted prices, or the opportunity to thumb their noses at the EU and U.S. Just like a person-to-person private transaction of gold for cash, a transaction like this on an international level is really difficult to prevent.

And it’s possible Russia might decide to hang onto their gold after all… Some analysts believe that Russia intends to simply sell their central bank gold stockpile domestically, in exchange for rubles. The nation could revitalize their beleaguered currency by implementing a gold standard in exactly this way.

“If things get worse, you could basically re-anchor to a pile of gold,” Credit Suisse Group AG strategist Zoltan Pozsar told Bloomberg. “You need an anchor in situations like this.”

Imagine the global response to the first national currency of the 21st Century backed by physical gold! At a stroke, Russia could reposition itself as a globally relevant economy, virtually guarantee international investor interest, and re-establish its currency as a store of value. And it could do all this without violating sanctions.

Consider the response from the U.S. and EU, both suffering four-decade high inflation, both crippled by debt and awash in freshly-printed currency. A new Russian gold standard would represent an economic coup over the west. All without firing a single shot.

Though the odds of such a move seem low, it looks like the kind of out-of-left-field move that Putin delights in. We’ll be paying close attention to developments in this story over the next few months.

Gold undoubtedly disappointed some investors when, after surging nearly $300/oz in less than six weeks, it reversed course near the previous all-time high of $2,070. Since then it has pulled back to the $1,940 level. But is the disappointment warranted, or is gold getting ready for something more exciting than reclaiming an all-time high? As seen on investing.com, there are only two historical precedents for this kind of price action: 1978 and 2009.

So is that what history tells us? Simply that big price surges are followed by a 10%+ correction? In the short-term, yes. But if we widen our perspective a little more, there’s plenty of room for enthusiasm…

How does that compare with today? Well, with a 20% gain over the past six months, gold is even better-positioned than in the previous historical episodes.

Gold’s valuations could seem high now, as they considerably exceed the previous all-time high of $1,910 from 2011. Yet, according to this analysis and historical comparison, today’s price could mark a brief opportunity (perhaps for only for a few weeks) to buy in before gold explodes to the upside. The same holds true for silver.

To sum up Jordan Roy-Byrne’s analysis:

The implication is that the weeks ahead could be your last chance to buy gold and silver at cheap or reasonable prices. The next move higher has the potential to be spectacular.

It might be that $2,500, an increasingly-common forecast in recent weeks, is a “least bullish” scenario with room for much greater growth.

As diversification becomes a priority, so will gold, says strategist

Any reasonable portfolio manager knows diversification is a primary investment principle. As Investopedia informs us:

A diversified portfolio contains a mix of distinct asset types and investment vehicles in an attempt at limiting exposure to any single asset or risk. The rationale behind this technique is that a portfolio constructed of different kinds of assets will, on average, yield higher long-term returns and lower the risk of any individual holding or security. [emphasis added]

Gold’s ability to uniquely diversify a portfolio is one of its most appealing traits. In a recent interview, Invesco’s chief investment strategist Kristina Hooper reviewed the current global and economic factors that may result in a truly remarkable year for gold.

Hooper said that this is the year when diversification of investments becomes crucial, not the least because of the escalation of the conflict between Russia and Ukraine. If you can increase your gold holdings, Hooper says now is the time to do so:

This is the year everyone will believe in the Gospel of diversification. The argument for gold as an asset class is strong. There could be a number of years when you don’t think you need an asset like gold in your portfolio until the time comes when you realize you do.

This reminds us of Adam Trexler’s comments we reported on previously: “The best time to buy gold is before a crisis. This is now a really good time for people to be stocking up…”

Russia’s invasion is one of many reasons we need to consider protecting our savings. Hooper said that, regardless of the resolution of the Russia/Ukraine conflict, the markets and the world itself have become a lot more uncertain. And if it’s one thing we’ve learned, it’s that in times of uncertainty, people flock to the most certain asset: Physical precious metals.

And it’s not just the invasion and subsequent uncertainties concerning Hooper. Just like anyone else, she’s watched U.S. inflation surge and the dollar’s purchasing power crumble. And they’re related – the longer the invasion lasts, the worse we’ll feel its effects:

The geopolitical events that have unfolded in the last month have exacerbated inflationary pressures. There is no doubt about that.

Even if Putin and Zelensky signed a peace agreement today, Hooper sees inflation climbing even higher for at least six months.

To Hooper, central banks are the primary economic concern in the short-term rather than recession or lack of economic growth. Yet recent data shows that both recession and stagnation are looking increasingly likely. On Wednesday, the Federal Reserve revealed a sharp downgrade of its growth forecast for the year, from 4% to 2.8%. They project core inflation at 4.1% this year (compared to December’s wildly optimistic forecast of 2.7% compared to a current reality of 6.4%).

Obviously the Fed’s estimates are ludicrous. These numbers were released for public relations purposes more than anything else. Especially in the case of inflation, most analysts predict it to run much higher and longer than the Fed is willing to admit.

Despite their stated intent to raise interest rates seven times this year, Hooper’s concerns over the Fed’s ability to rein in inflation are on point.