As the energy sector continues to suffer, Russia’s economy suffers along with it. So why do they continue to hoard gold? Find out here. 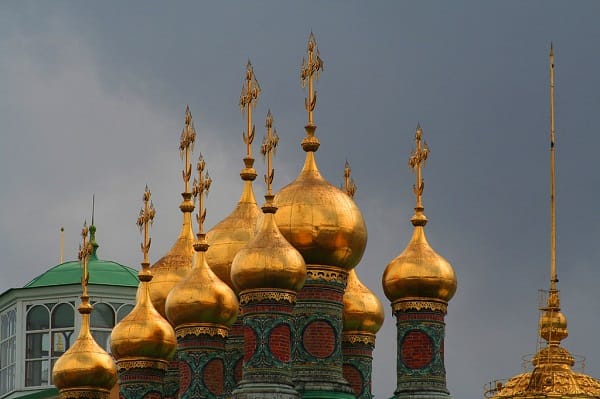 This week, Your News to Know brings you the latest happenings in the global economy and the gold market. Stories include: Weaker economic output could be good for Russian gold demand, five reasons RBC Capital Markets is positive on gold, and the yellow metal is back in fashion after major global selloff.

Russia’s economic difficulties continue with no relief in sight until at least 2017. On Monday, the country’s statistical services reported that the nation’s gross domestic product (GDP) fell 3.7% last year, a major downturn compared to the overall 0.6% rise in 2014.

Aside from severe economic sanctions imposed on the nation, many of its economic hardships revolve around plummeting oil prices, which have dropped almost 41% since January 2015.

Yet Forbes reports that gold is one commodity that could benefit from these issues, and especially from Russia’s free-falling currency. As the ruble hit a new low of 86 against the U.S. dollar, gold in ruble terms reached a record high of 93.827 rubles an ounce, besting the previous record set last February.

Gold has enjoyed a decent tailwind in recent times as investors rediscovered its safe-haven potential amid global economic uncertainty. Russia’s central bank continues being a major beneficiary of the yellow metal’s safety: Despite selling off all other assets and reducing its foreign reserves by around $8 billion, the nation continues to buy large amounts of physical gold.

The Central Bank of Russia bought 21.8 tons in December alone, bringing the total purchased amount for the year to 206.51 tons – a sizeable increase from 2014’s 172.99 tons. With the International Monetary Fund expecting further contractions in 2016, Russia’s bullion buying will likely continue at its current impressive pace.

While some wonder if gold can continue its recent upswing after opening the week above $1,100, Kitco News’ Sarah Benali reports that Royal Bank of Canada (RBC) Capital Markets analysts are certain it can and offer five good reasons to support this.

To them, the metal’s resilience against a strong U.S. dollar provides a major clue about its future: Gold was down only 9% against a U.S. dollar index (DXY) that was up 9% in 2015, and holds firmly opposite the Economist Metals Price Index and the West Texas Intermediate. The sub-prime crisis in mid-2007 and peak crisis in 2008-2009 are two examples of times when gold abandoned a strong negative correlation with the dollar.

Investor sentiment around the world also sparks optimism: Major exchange-traded fund (ETF) additions and positive Comex positions suggest that retail investors are warming up to the metal. Demand is fundamentally supporting gold prices, and much of it comes from non-U.S. dollar holders: Half of the global gold demand is split almost dead even between China (26%) and India (24%), with non-dollar economies that make up for 90% of overall demand seeing stronger metal prices in their currencies.

Likewise, the official sector continues being a major driver of demand through central banks, which have been net buyers since 2010. In 2015, China’s central bank bought 6% of the global gold supply while Russia acquired 4%. This is especially noteworthy considering that the countries are among the biggest gold producers in the world, taking 1st and 4th places, respectively.

Lastly, the much-discussed U.S. monetary policy that many have expected to weigh on gold might end up not affecting it all that much. RBC analysts believe that the yellow metal has been in a “corrective phase” since 2011 and are dismissive of 2016’s hiking cycle in terms of its potential negative impact on gold.

Gold back in fashion after $15 trillion global equity selloff

While investors have spent the last couple of years being complacent about risks and under-appreciating gold’s safe-haven value, recent data shows that they might finally be coming around. As seen on Bloomberg, a $15 trillion global equity selloff and further uncertainties ahead are quickly reinstating the metal’s appeal with investors, both large and small.

Bullion, in particular, is seeing a revival in the midst of these difficulties. “What’s out of fashion may be coming back. That atmosphere of people feeling completely calm and untroubled, I think, is starting to go away. Gold is a very good risk-off trade, and I think people are starting to look very, very carefully at the risky positions that they have on a number of other markets,” said George Milling-Stanley, head of gold investments at State Street Global Advisors which oversees $2.4 trillion.

Concerns about further contagion from China, volatile stock markets and tensions in the Middle East continue facilitating the metal’s climb. Aside from bullion, gold exchange-traded funds (ETFs) and futures experienced a similar boom, with the value of gold exchange-traded products (ETPs) jumping by $3 billion in 2016. As Bloomberg’s Luzi-Ann Javier notes, hedge funds and other large speculators who were at their most bearish on gold just three weeks ago are now doubling their net-long positions in bullion.