Home » Blog » Should Gold Find a Home Underneath Your Mattress?

Should Gold Find a Home Underneath Your Mattress?

Global financial volatility has caused gold to boost by 28% since the start of 2016. Could it be time to hoard the metal? 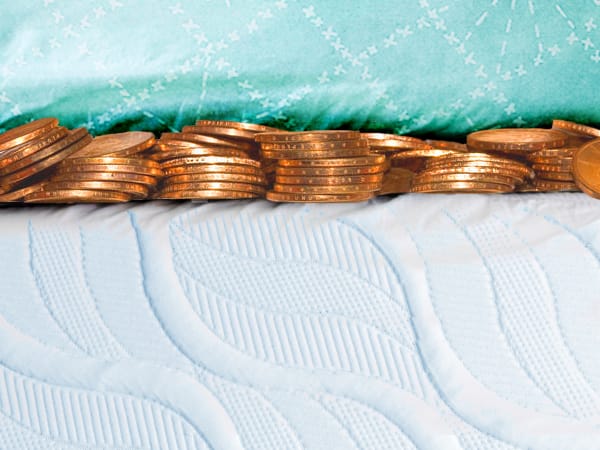 This week, Your News to Know brings you the hottest news involving the gold market and the overall economy. Stories include: Is it time to stash some gold coins? How the relationship between gold and silver changed dramatically, and Australia’s $1 million gold coin.

Is it time to stash some gold coins under your mattress?

As seen on Yahoo Finance, gold is now up a staggering 28% since the start of 2016 due to global financial volatility, the most recent example of which is the surprise passing of the Brexit vote. But what is the optimal way for investors to gain exposure to the yellow metal?

While so-called paper gold in the form of mining stocks and ETFs is an option, there are certain issues with these assets – namely, they don’t always follow the price of gold. “There are sometimes outside forces at play that can move the price of paper investments at different rates and in different directions than the spot price of gold,” says David Beahm, president and CEO of New Orleans precious metals investment firm Blanchard and Co. “Gold could be performing strongly, and a mining company’s stock may not reflect the commodity’s performance.”

More than a mere safety play, Beahm views gold as a vehicle to not only protect but also grow wealth, but only when invested in correctly. The precious metals firm CEO favors bullion above other forms of exposure for multiple reasons, not the least of which is safety. “Having physical possession of your asset and having a peace of mind that no one can get to it but you makes it worth the relatively small cost,” says Beahm. “Keeping gold in a home safe or in a safe deposit box is easy for most people.”

Yet there are differences even among bullion itself. Peter A. Grant, chief market analyst at USAGold, favors gold coins above bars as they are easier to convert to cash. While there are many types of gold coins to choose from, Beahm highlights the Gold American Eagle as the premium choice thanks to its purity and higher buy-back price. And while the buying tends to be straightforward, Grant urges investors to favor established companies and stay vigilant when talking to potential sellers: “Trust your instincts. If you feel like your questions aren’t being answered, or you feel like you’re being pressured, hang up and try another firm.”

But what about the naysayers who complain that gold offers no returns or dividends? With negative interest rates on the rise, Beahm no longer finds this argument valid: “Blanchard clients are often looking for the return of their money, not the return on their money,” he explains. “Take the plethora of negative interest-rate bonds around the globe right now. Gold has the power to store and grow wealth.”

At any rate, big investment banks seem to agree: both Saxo Bank and JP Morgan now predict that gold will continue rising past its current price of $1,358 and reach $1,400 per ounce by year’s end.

The relationship between gold and silver has changed dramatically

The gold-to-silver ratio is a measure that investment strategists have been keeping a close eye on for decades – many find it indicative of underlying market issues as well as a way to gauge both metals’ current standing. As noted by CNBC’s Alex Rosenberg, the ratio was still out of proportion as late as early 2016: by the end of February, an ounce of gold was worth over 83 ounces of silver.

With the historical norm for the gold/silver ratio being around 61, it’s clear that gold enjoyed a sizeable premium over silver. The ratio seems to be correcting itself, however, and has now come down to 66.5.

Rosenberg points out that this correction can be viewed in either bullish or bearish terms depending on the individual – while some analysts, such as Bear Traps Report publisher Larry McDonald, view the move as a red flag, others see it as a green one. Technical analyst Ari Wald is one of the optimists – Wald sees a clear correlation between the drop in the gold/silver ratio and a growth in stocks that leads to more industrial uses for silver, using a historical analysis that dates back to 1998 to back up his views.

“We would view silver’s outperformance as a signal that investors are embracing risk again,” said Wald on Friday, adding that “it confirms our view that we think the S&P 500 is setting up for new highs over the next coming months.”

On Tuesday, the Perth Mint unveiled what is perhaps the most valuable non-historic gold coin in existence: a humungous piece made from 99.9% pure gold and adorned with a massive half-carat red diamond.

Business Insider’s Paul Colgan rightly notes that there is no person more appropriate to announce the reveal than Colin Barnett: Barnett was the premier of Western Australia, the country’s mining quarter, during the peak of its all-important mining boom that drove Australia’s economic growth over the past decade.

Due to the coin’s Perth Mint-valued price of $1 million, the display item was merely a replica of the real deal. This didn’t stop Colgan from wondering: who is going to buy this extravagant coin? Moreover, how much are they really willing to pay for this unique commodity?

Are we about to experience another 2008 like economic crisis? Find out here.