Home » Blog » Social Security May Be Moving “Behind the 8-Ball”

Social Security May Be Moving “Behind the 8-Ball” 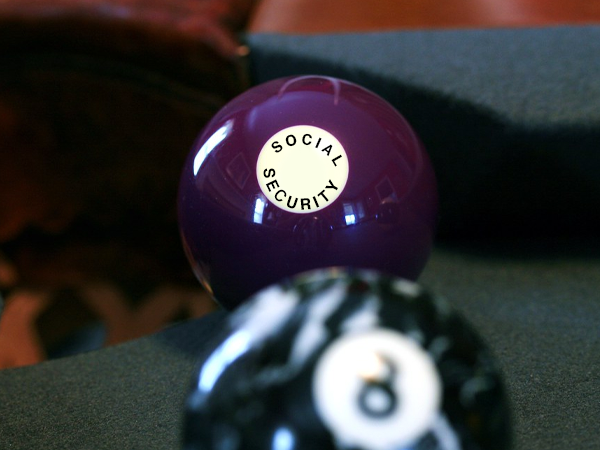 The Social Security payment retirees get every month has become an important part of retirement life. For some, this payment even pulls them out of poverty.

But times have changed. Social Security is in danger, and if nothing is done, it faces a serious cut of 25% by 2034. What’s more alarming is some of that “danger” may knock on Social Security’s “door” in 2020.

Here is one potential reason why…

The Social Security Administration (SSA) needs to generate more revenue than expenditure. In fact, according to a Motley Fool piece, the SSA touts a 36-year streak of doing just that. But the same piece also reveals that streak is in jeopardy:

But beginning in 2020 and beyond, Social Security projects to spend more than it brings in, leading to the steady depletion of its nearly $2.9 trillion in asset reserves.

Assuming this projection pans out, the U.S. is approaching the “peak” of the SSA reserve “mountain” and will be heading down the other side.

Keep in mind these projections are estimates, and as such, can go wrong. This means the SSA projections of a $1 billion surplus for 2019 could go wrong and be put in a bad position, or “behind the 8-ball”.

The Motley Fool piece sheds light on the possible tipping point, starting from SSA’s $2.895 trillion in reserves at the beginning of 2019 (emphasis ours):

But as of the end of May 2019, the SSA’s investment holdings tallied $2,892,944,200,000, or $2.893 trillion (with rounding). In other words, over the first five months of 2019, the Social Security program saw an outflow of $2.23 billion. In the grand scheme of things, this is peanuts compared with the $2.893 trillion currently in asset reserves. But, more important, it could signal that the long-awaited, and feared, inflection point has arrived.

If this idea holds, the SSA’s projection for “spending more than it’s taking in” will be arriving a year faster than originally thought. Extrapolating that idea means cuts to benefits once the forecast for 2034 has the potential to arrive sooner. Not good.

Perhaps more disturbing, Congress has had knowledge of this imminent Social Security shortfall for 34 years, and yet nothing has been done.

The Stalemate that May Prevent a Comfortable Retirement

Each “side of the aisle” in Congress has its own ideas for resolving the Social Security dilemma. The problem is, most people don’t like the solutions. That, and Congress is at a “stalemate” when it comes to working together on a comprehensive solution.

In another Motley Fool piece, we can see how Congress keeps “spinning its wheels” in the mud:

Republicans … prefer gradually increasing the full retirement age — the age where you become eligible to receive your full retirement benefit, as determined by your birth year — from age 67, which is where it’ll cap in 2022 for those born in 1960 or later, to between age 68 and 70.

Each “side” has its possible solution, but neither side has had them pass through Congress yet. Each solution has its drawbacks, and each simply put off what seems to be the inevitable conclusion: Social Security is running out of time.

Either way, paying more taxes or having to wait to claim benefits you’re entitled to seem to be all that Congress has got. Simply putting on a Band-aid won’t stop the bleeding.

At the end of the official SSA report, the final note brings another item of concern… the Federal Debt (emphasis ours):

So on top of depleting reserves, and a looming 2034 deadline, historic Federal debt may also be compounding the Social Security problem. And Congress’ stalemate isn’t helping here, either.

The last meaningful proposal from Congress to solve the imminent Social Security dilemma seems unsatisfactory. It looks like more “passing the buck” instead of actually solving the underlying problem. Congress almost always talks a good game, but then the game never seems to end.

Now, 34 years later, with no real solutions it might already be too late. Granted, a collapse of Social Security won’t happen overnight, but it sure seems obvious where it’s headed.

So don’t wait until the last minute to “insure” your retirement against “their” hubris. Hedge your bets now. Consider retirement plans that are known for their security such as diversifying with precious metals. You may not be able to rely on the government when you retire, but at least you’ll have a plan that can help you feel more secure.