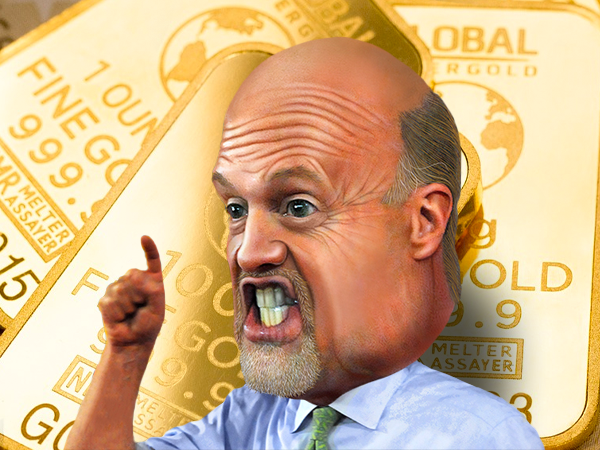 This week, Your News to Know rounds up the latest top stories involving gold and the overall economy. Stories include: Jim Cramer advises Americans not to miss the boat with gold, why now is the time to move into gold, and gold’s drop reinforces its safe-haven status.

Wednesday was yet another instance of bad turning to worse when it comes to the coronavirus and its effect on the global economy. On the same day that the Dow dropped another 1,300 points, the World Health Organization issued a statement that declared the coronavirus a global pandemic.

The statement gave little cause for optimism, with WHO Director-General Dr. Tedros Adhanom Ghebreyesus expressing concern both in regards to the spread of the virus and the lack of response to it. While Wednesday was another low point for the stock market, the prior Monday was perhaps the biggest downwards milestone, with equities posting their worst trading day since the 2008 financial crisis.

Meanwhile, the action in the gold market has been nothing short of turbulent, although the yellow metal remains one of the few assets with positive performances during a massive overarching selloff. The metal climbed above a seven-year high of $1,700 as the week opened before tracing back to the $1,500 level by Friday.

In his tweets published on Wednesday, “Mad Money” host Jim Cramer advised people not to miss the opportunity to buy the dip, especially given the way the situation is unfolding. Instead of panic selling, Cramer advised investors to take a calm look at the market and examine the state of various assets before making a decision. With numerous sectors already in recession and the global economy feeling the brunt of the crisis, gold is among the rare assets whose fundamentals continue to grow stronger as the pandemic unfolds, despite the occasional dip.

There is no better entry point into gold than now

In a recent analysis, Forbes contributor Naeem Aslam explained why people should have no doubt that gold is the place they want to be in, and that its panic-fueled price pullbacks serve as an exceptional buying opportunity due to the broader market’s prospects.

To reinforce his point, Aslam has taken a look at institutional holdings to see what the smart money is doing. While gold’s week-to-week action could give the impression that the metal is coming under the same pressure as other assets, funds tell a different tale. As Aslam points out, money managers are making the most of price dips, as institutional gold holdings have already reached record levels and are continuing to rise.

This points to strong expectations that gold’s price will explode in the near future, and Aslam sees no shortage of reasons why. Gold’s negative correlation with stocks is a powerful enough motive on its own, given that equities have now had their worst drop since 1987 and all signs point to the current sell-off being just the beginning of an avalanche. Since last summer, gold was able to deviate from this correlation and march upwards together with the then-bull running stocks, showcasing the sheer strength of its fundamentals.

These will only become more prominent as the coronavirus takes an even greater toll, with pessimistic forecasts across the board. Aslam points to the Federal Reserve, which appears to have been cornered into cutting interest rates to provide relief once again. Major central banks around the world have already made 50-basis-point cuts, and Aslam believes that the likelihood of the Fed following suit would establish gold above $1,700. If the Fed cuts rates by 75 points, as banks such as Goldman Sachs and JP Morgan are predicting, Aslam sees an upside above $1,750 for the metal. [UPDATE: On March 15, the Federal Reserve announced an interest rate cut of 100 points.]

Strengthening the fact for gold further is the fact that the devastating effect of the coronavirus has yet to be fully recognized. When economic data begins to reflect the weakness and drop in earnings, Aslam believes that the flock to safety will be monumental.

In a recent interview with MarketWatch, Brien Lundin, editor of Gold Newsletter, explained why gold’s price movement is exactly what one would expect at the start of a global crisis. As Lundin notes, one of gold’s primary roles is wealth preservation, and gold’s selloff amid a rampant thirst for liquidity only proves that the metal is holding up to its merit.

Yet Lundin believes that the quest for liquidity, especially among gold sellers, will soon prove to be ill-advised. While it’s easy to forgo assets in favor of cash during times of crisis, a quick look at the broader picture shows that the very same crisis will erode the value of cash through reactionary loosening of monetary policies.

Adam Koos, president of Libertas Wealth Management Group, stated that interest rate cuts are the biggest threat to cash, and that the very same cuts are already being used to alleviate the effects of the coronavirus pandemic. With the Fed having cut 150 basis points in response, Koos finds interest rates falling below zero a likely scenario, at which point even the most fearful investors will need to reassess their options in order to hold onto their wealth.

And while gold’s recent dips appear to be mirroring the action in stocks, a deeper look into the two markets shows that they couldn’t be further apart. Gold is still moving around six-year highs and, despite the major sell-off, remains in the green year-to-date. On the flip side, stocks are looking at an end to an 11-year old bull market, being down 22% year-to-date as of Thursday. Despite a years-long bull run with virtually no hitches, Thursday marked the point where gold officially outperformed the S&P 500 Index over a five-year span.