Home » Blog » Just Before the “Everything” Bubble Explodes: Stock Market Mania in 2021

Just Before the “Everything” Bubble Explodes: Stock Market Mania in 2021 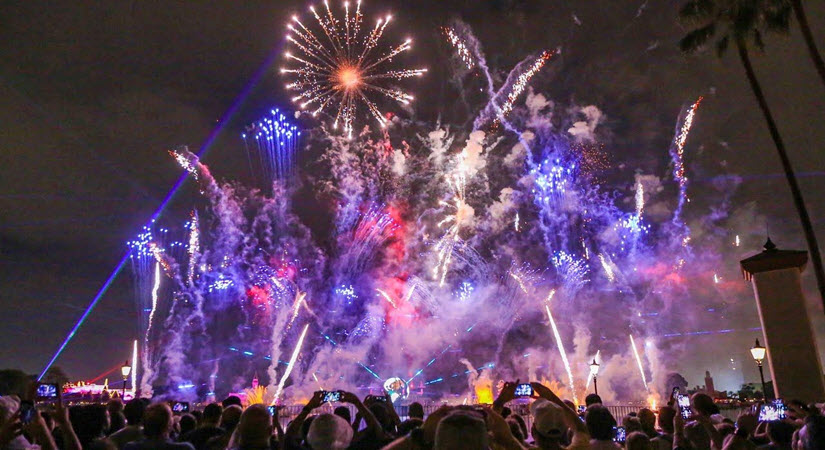 Is the market going insane? Is an enormous “everything bubble” – inflated with cash flowing into overvalued investments – headed for a historic explosion? Is the market in a “mania” phase right now?

With every passing day, it’s getting more challenging to answer “no” to any of these questions.

Wolf Richter highlighted one example in a recent article, charting a dramatic rise in margin debt (broker debt used to finance investments) and labeling it a “WTF spike.”

As amusing as Wolf’s acronym might be, the chart below gives the impression that since March 2020, investors are not only hurling money into the stock market, they’re borrowing to do so at an insane pace: 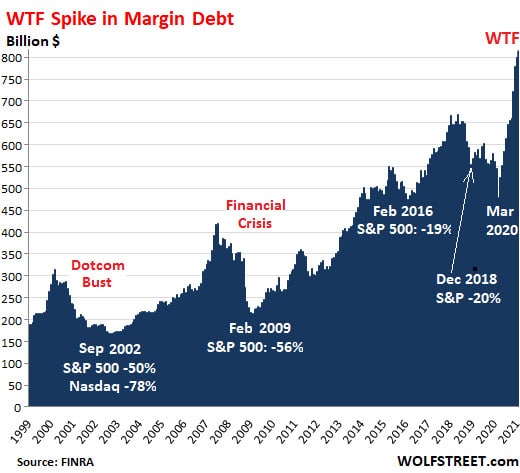 Why is this bad? A couple of reasons.

Second: margin buying, also known as “leverage,” magnifies the consequences of any tremble in the market. See, brokers use the value of an investor’s portfolio to determine how much they’re willing to loan the investor.

Margin buying is a great accelerator of stock prices because buying with borrowed money creates buying pressure, and prices go up – and rising prices increase the speculator’s portfolio balance, encouraging the broker to offer larger loans and leading more stock buying on margin. As long as the speculator’s bets go up, everything’s fine.

On the other hand, if a speculator’s bets don’t go well, their portfolio value declines and their broker will demand more collateral. They may be forced to sell stocks to pay these “margin calls” – and sometimes worried brokers sell customers’ holdings without notice for collateral. Even worse, brokers can change margin requirements at any time (usually demanding more collateral when the market looks shaky).

Forced selling to meet margin calls puts downward pressure on an already-declining market. The more prices fall, the more desperate speculators try to dump their stocks, increasing supply at the same time other gamblers are trying to raise cash.

The historic surge in margin balances in recent months is another indicator of how hyper-speculative and blindly courageous the mega-bubble has become. All kinds of new theories are being proffered why fundamentals and valuations are meaningless, and why prices of all assets will shoot to the moon, no matter what.

It’s interesting that Wolf highlights “hyper-speculative,” “blindly courageous,” and that fundamentals now appear to be meaningless. These three faults seem to describe exactly what appears to be driving a risk-blind investing culture.

The stock market is currently populated by somewhere between 10 and 20 million traders who have never operated in an environment in which they weren’t immediately rewarded with gains. For almost anything they did, in any stock, at any time.

And the worst thing that can happen to a gambler (especially a first-time gambler) is that they win… Because now the stock market is packed with Brown’s millions of first-time traders who think the winning will go on forever.

From an interview transcript with financial theorist William Bernstein, we can get a feeling of what “mania” in the stock market looked like just before the last major recession:

In summer around ’06 or ’07, I was listening to Bob Shiller be interviewed by somebody about the real estate bubble that was still evolving at that point… she wasn’t having any part of it and finally, she got so frustrated with Professor Shiller that she stopped him and said ‘Professor Shiller, I don’t know who you think you are but you don’t know the first thing about real estate.”

In this example, Shiller’s interviewer gets angry because he’s explaining that real estate is overvalued. She is inside the bubble, infected with the real estate mania of the time. She simply cannot accept that a Nobel laureate, an economist, disagrees with what is so blatantly obvious to her and millions of others: that real estate simply cannot fail to keep going up and up forever. That wild speculation eventually led to a major market catastrophe in 2008-09.

Jeremy Grantham cites a modern example of being insulted for his opinions on bitcoin and points out, “Rapidly rising hostility to bears is a very good, very late signal that the bubble is way advanced.” If enthusiasts can’t stand to hear contrary opinions, then they might’ve crossed the line into full-fledged maniac…

Today we have plenty more examples of how “general interest,” wild speculation, and a “desperation” to find unusual types of investing opportunities are fueling market mania right now.

The first example is a resurgence in the general public’s interest in stocks, perhaps driven by government stimulus checks combined with the recent Wall Street Bets fiasco. According to Barron’s, this trend is turning mutual funds into “gushers:”

Global equity funds saw a record inflow of $58 billion in the latest week, according to Bank of America Global Research’s parsing of data from EPFR Global.

Who knows if the stocks inside these funds are overvalued or not? Much of this type of “casino” investing (fueled by stimulus checks and boredom) isn’t likely to be based on fundamentals.

Another example having to do with a recent uptick in crypto investing was reported by Bloomberg: “Retail traders got reinvigorated with the latest NFT buzz and as the stimulus checks hit their bank accounts.”

Even More Market Mania (Until the Bubble Pops)

According to the same Times reporting, boredom and stimulus checks combined to create “mini-bubbles across a wide variety of esoteric categories” including “the gaming site Roblox and the South Korean e-commerce company Coupang, as well as for shares of the video game retailer GameStop and other so-called ‘meme’ stocks.”

Wall Street forecaster Jim Bianco told CNBC he thinks this isn’t going to stop for a while: “The obsession to take on risk will overpower inflation concerns for at least the next several months.”

“It is mania,” Bianco said. But he might be overly optimistic and even seems to be in favor of fueling the mania in his closing remarks to CNBC: “The path of least resistance is more money gets thrown at the market, and it goes up.” Maybe he’s right, considering the Deutsche Bank survey concluding that 37%, $150 billion, of the latest stimulus seems headed into the stock market. And who’s investing? According to Deutsche Bank strategists, “a younger, often new-to-investing, and aggressive cohort not afraid to employ leverage” (emphasis added).

When you have reached this level of obvious super-enthusiasm, the bubble has always, without exception, broken in the next few months, not a few years. You can’t maintain this level of near-ecstasy. It can’t be done, because you’ve put in your last dollar. You are all in. What are you supposed to do beyond that point? You can’t borrow any more money. You can’t take any more risk. How do you keep that level of enthusiasm going indefinitely?

Grizzled Wall Street hands have a saying: “The bull market’s over when the last bull puts in their last dollar.” When those stimulus checks are gone, we could soon see a crash of historic proportions.

The most popular line from the classic Memoirs of Extraordinary Popular Delusions and the Madness of Crowds seems to illustrate what is happening quite well:

“Men, it is said, think in herds; it will be seen that they go mad in herds, while they only recover their senses more slowly, and one by one.”

Maybe it will take a historic crash to bring some investors to their senses. At that point, fundamentals might once again be in the driver’s seat (instead of wild speculation).

Until then, it’s a good idea for you to take heed of the warning signs. Consider your motives before making any financial moves. Examine your retirement savings and develop a plan to protect them from market manias as best you can.

Don’t neglect the benefits of diversifying your savings as you see fit, and consider fortifying your nest egg with inflation-resistant precious metals. Both gold and silver help provide stability when the market goes off the rails. When the mania collapses and speculators flee into safe-haven assets, it may comfort (as well as profit) you to be there first.