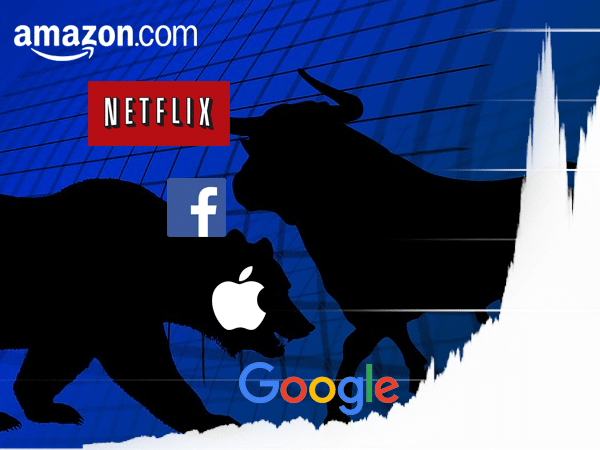 In 2018, they shivered, as fears of trade war escalation took a big chunk out of their profits.

These are just two recent examples of many that have caused uncertainty for the FAANG stocks. Yet so far, nothing has really impacted them. Which leads us to today…

According to Wolf Richter, last week Apple shares lost 9.9% in value or $226 billion in just 3 days. Netflix stock continues to tank, losing about 14% in value between September 1 and 10. Google’s parent company Alphabet also took a hit on the chin and lost 7.9%. Others also followed suit…

When all was said and done last week, these behemoths fell more than 7.4% combined and lost more than $500 billion in value.

The scary thing is, even for these giants, it only took two days last week to unwind an entire summer rally. According to Wolf:

Taken together, these five giants took a massive hit, and it appears the rest of the Wilshire 5000 didn’t fare so well, either: 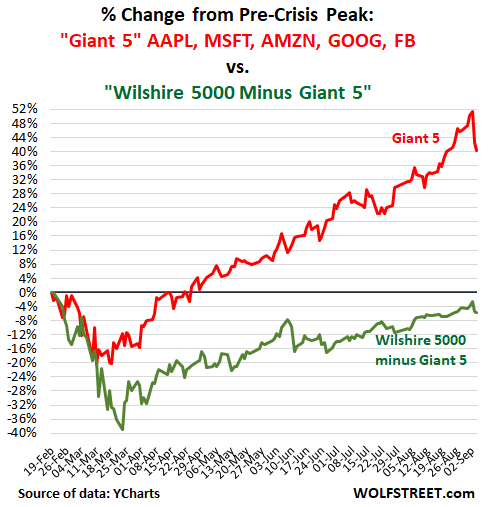 “The S&P 500 market index only fell 4% lower in the same period,” according to the Motley Fool. Of course, a 4% drop in the S&P, which equates to almost $1.1 trillion in market cap, is still a fairly big deal.

All of the uncertainty with these megaliths raises a couple critical questions.

Is the FAANG “Party” Coming to an End?

The short answer is, not likely.

And they came through those situations with barely a scratch.

Even with an ongoing antitrust investigation and the big hit that the FAANG gang took last week, the companies are still alive and kicking (for now).

But these companies’ inflated share prices don’t leave much room for portfolio growth.

According to Rocco Pendola, the “party” isn’t all that great: “For every person stocks such as FB, AAPL, AMZN, NFLX, and GOOG/GOOGL made rich over the last decade, there are likely hundreds, if not thousands, who either missed out or got hurt trying to buy stocks on the premise that all they do is go up.”

So while FAANG share prices may remain elevated in spite of outside forces, you should consider for yourself if it’s worth the risk of holding these stocks at all.

Are Your Retirement Savings Unnecessarily At Risk?

A good idea is to make sure your savings doesn’t have an excessive amount of capital tied up in FAANG stocks, or large corporations like them. Here’s why…

The media hype surrounding an announcement by Apple on one of their buybacks a couple of years ago increased their market cap by $118 billion. Google, Amazon, Netflix, and Facebook have all done similar things.

That means there’s a lot of “fat” in these FAANG company stocks right now. When the market tanks and makes these companies go on a “diet,” what happens to all of the gains that you had on paper? It evaporates.

That’s why it’s a good idea to consider hedging against this type of risk by diversifying your retirement into varying asset classes, such as precious metals.