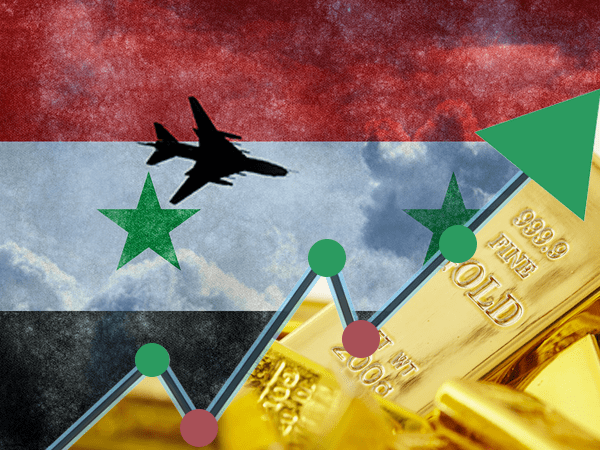 Historically, there has always been tension in Syria. Wars have been fought there for centuries. But now it appears Syria could be at the center of a larger conflict.

First, it’s important to have some context. Syria’s population has grown about 700% since 1946, from 3 million to 24 million. It’s dry, with severe drought conditions resembling the U.S. “Dust Bowl” of the 1930’s.

They have very little in the way of food, agriculture, and oil… so this area frequently runs into trouble with resource management for its growing population.

All of which raises an important question…

Why is such a war-torn, resource scarce, relatively tiny patch of land of such interest to global powers like the U.S. and Russia?

One word: Control. Syria is a metaphorical gate. But as with any geopolitical situation, gaining this “control” is very complex (and tense).

And, leaving possible conspiracy theories aside, all of this international conflict is happening while the Syrians are having a civil war within its own country.

So without writing a whole book on this, generally speaking, some U.S. officials want Syrian regime change, but pursuing that ignites tensions with Russia.

You could look at the entire mess as a “cat” and “mouse” game between the U.S. and Russia.

From an Obama-era report by Heather Murdock at VOA News about the Russian “mouse”:

Andreas Krieg, an assistant professor at King’s College London who also works with the Qatar Armed Forces, said the Russians are a more aggressive actor in Syria in general, but their actions are calculated to create the image of a power-position, not an actual battle.

“They would never take the risk of having a direct confrontation with the U.S. and the West,” he said.

And then we have the American “cat” from the same report: “The U.S. has suggested a compromise, like keeping the Assad government, but with a different figurehead.”

Fast forward to the present, and it looks like this “cat and mouse” game might escalate into a “Godzilla versus Mothra” battle that could disrupt the entire market and send gold prices soaring.

In response to an alleged chemical attack by the Syrian government on its own citizens, the U.S., UK, and France recently fired a number of missiles into the country.

Naturally, this sparked new tension with Russia. From a Bloomberg Politics report:

A few weeks ago, Donald Trump invited Vladimir Putin to meet — maybe even at the White House. After U.S.-led missile strikes in Syria, the two nations’ officials can’t get into the same room without insulting each other.

But keep in mind this new wave of animosity is just getting started, following accusations of “election meddling” since 2016.

Here’s an example of the initial “tit-for-tat” that could spark deeper tension in the coming weeks, from the same Bloomberg report:

The result has been an unprecedented wave of retaliations and tit-for-tat actions. After the U.K. blamed Russia for the poisoning of a former spy in Britain, more than 150 Russian diplomats were expelled by the U.K. and allies including the U.S. The Trump administration followed with new sanctions on Russian oligarchs including billionaire aluminum magnate Oleg Deripaska. His company lost half its value in a day after the sanctions were announced.

Plus, Russia’s defense ministry is claiming the chemical attacks which spurred the airstrike were staged, and the British government accelerated the conflict which led to Trump authorizing the airstrike.

All of these sanctions, the airstrike, and the back-and-forth about staging an attack are the perfect ingredients to sprinkle on top of Syrian civil war… and BOOM!

Suddenly, you have a new “Cold War” soup of geopolitical tension between the U.S. and Russia. And it looks like things could escalate even further, with fear for the worst now putting investors on pins and needles.

The recent trade and currency wars alone open up the potential for gold to start rising in price again. Recent news of China’s petroyuan supports this trend.

But add to that these increasing tensions, and you create a “launch pad” for gold prices.

These are the perfect ingredients for “emotional gold.” When the threat of war looms in the geopolitical conversation, the price of gold can spike up quickly.

In fact, Todd Colvin, a 20-year veteran trader with Ambrosino Brothers, thinks gold could go to $1,400 in a hurry. From a recent CNBC report:

Colvin, who has worked on the Chicago Mercantile Exchange trading floor for more than 20 years, isn’t ruling out a new gold spike caused by tensions abroad. He believes a tenuous geopolitical situation could push prices to $1400 in a hurry.

Of course, the price could come back down if geopolitical tensions relax. But if the tensions continue to escalate…

It’s time to think about stabilizing your own portfolio.

As a genuine store of value, gold can help with that, even during the fallout from possible “Cold War” economic conditions.