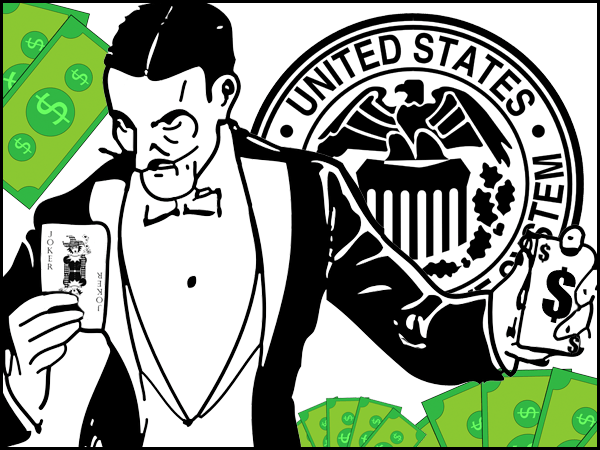 It’s been 10 years since Washington Mutual, Lehman Brothers, and other financial institutions went bust. When that happened, thousands lost their jobs.

The real estate market dried up, and the mortgage industry’s exotic loan products put subprime buyers out on the streets.

In September 2008 the stock market crashed at an unprecedented rate, costing many investors and retirees their livelihoods.

The Great Recession may go down in history as the worst stock market crash of the 21st century. But a peculiar “illusion” raises serious questions…

As this is being written, the DOW sits at a record high 26674.18. But this comes after dropping drastically, and struggling since January 2018 to reach the former record.

Even median household income is back over levels not seen since 2007 according to the U.S. Census Bureau, although it’s only about 3% higher (see chart).

If one only pays attention to superficial numbers and mainstream media reports, the U.S. economy may appear as if it has grown far beyond any recession risk.

But if you look closer, you’ll see the Fed hasn’t learned much since the worst recession in recent history.

On the surface, it may appear like the record growth and illusion of a strong economy will last forever.

But that’s why it’s an illusion. Underneath the illusory debt-fueled growth lies the specter of mistakes made in the years leading up to the 2008 recession.

It starts with debt, and lots of it according to Sovereign Man (emphasis ours):

Look at the Land of the Free as a classic example: US GDP is up 38% over the past decade. Great.

But over the same period, the US national debt has increased 122%!

In other words, in the last ten years, the US national debt increased by more than $3 for every $1 increase in GDP.

Total debt is increasing at a rate 3 times faster than the GDP. That’s like riding a bicycle and trying to chase an automobile driving down the freeway. One won’t catch the other.

Even worse, much of that debt is junk debt that has no hope of being paid back. Netflix, Tesla, and other insolvent corporations aren’t likely to cover their obligations.

Yet they still borrow at record low rates, while their stock prices remain at record highs, sometimes based on market hype alone.

But the junk debt “debacle” doesn’t stop there.

After the 2008 Recession the Fed printed money and flooded the market with it. (They did the same thing to recover from the 2001 recession).

This “cheap money” had been flowing freely until the Fed finally turned off the QE “spigot” in October 2017. (Similar to the early 2000s before the Recession).

However, this new debt is more concerning than the previous debt because it can’t be refinanced at lower interest rates.

But it gets worse. According to Sovereign Man, the “experts” think 2018 is all “rainbows and buttercups”. But Sovereign Man says they “believe they fixed a problem caused by too much bad debt by facilitating record levels of even worse debt”.

So from 2001 – 2007 garbage debt-fueled “growth” made a lot of people think everything was hunky dory. But history has already proven that wasn’t the case.

And we could be in the same situation again. Except this time, the debt fueling all of this illusory growth is even more toxic.

The QE-financed debt “ditch” is so deep it would take a book to explain it all.

Bottom line, creditors don’t care if you can afford that house or not. Corporations are going to keep doing whatever keeps their businesses afloat, even at your expense.

And the Fed will do whatever it takes to keep their party going, even staying blind to the devastating economic reality that could unfold at any time and affect us all.

Don’t Pay for “Their” Party With Your Financial Future

Like someone who leaves you sitting at a restaurant to pay for the bill, the Fed appears to be oblivious to the potential impact of its myopic economic view.

The debt-fueled growth the U.S. has enjoyed for the last decade is built on a house of cards. When the bill comes due, you could be left paying for it.

If that happens, the situation could be worse than 2008. So don’t wait to prepare your savings.