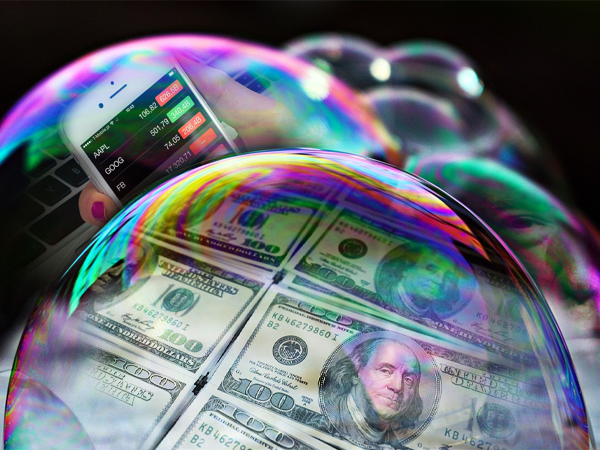 In 2018, a very significant economic change occurred, which sealed the fate of the U.S. economy as well as some other economies around the globe. This change was the shift of central bank policy. The era of stimulus and artificial support of various markets, including stocks, is beginning to fade away as the Federal Reserve pursues policy tightening, including higher interest rates and larger cuts to its balance sheet.

I warned of this change under new Chairman Jerome Powell at the beginning of 2018 in my article ‘New Fed Chairman Will Trigger Stock Market Crash In 2018’. The crash had a false start in February/March, as stocks were saved by massive corporate buybacks through the 2nd and 3rd quarters. However, as interest rates edged higher and Trump’s tax cut cash ran thin, corporate stock buybacks began to dwindle in the final quarter of the year.

As I predicted in September in my article ‘The Everything Bubble: When Will It Finally Crash?’, the crash accelerated in December, as the Fed raised interest rates to their neutral rate of inflation and increased balance sheet cuts to $50 billion per month.

It is important to note that when we speak of a crash in alternative economic circles, we are not only talking about stock markets. Mainstream economists often claim that stocks are a predictive indicator for the future health of the wider economy. This is incorrect. Stocks are actually a trailing indicator; they crash long after all other fundamentals have started to decline.

Housing markets have been plunging in terms of sales as well as prices. The Fed’s interest rate hikes are translating to much higher mortgage rates in the wake of overly inflated values and weaker consumer wages. Corporate buyers in real estate, which have been propping up the housing market for years, are now unable to continue life support. Corporate debt across the board is at all-time highs not seen since the crash of 2008, and with higher interest rates, borrowing cheap capital is no longer an option.

In November 2018, home sales posted the steepest decline in over 7 years.

Auto markets, another major indicator of economic stability, have been plunging in extreme fashion. Autos saw steep declines throughout the last half of 2018, once again as higher Fed interest rates killed easy credit ARM-style car loans.

U.S. credit is also drying up as investors pull capital from volatile markets and interest rates rise. Liquidity is disappearing, which means debt is becoming more expensive, or inaccessible to most people and businesses.

A false narrative is being presented in the mainstream on these circumstances – by both the media and central bankers. There has been a considerable amount of “jawboning” by economic authorities and mainstream analysts in an attempt to keep the public distracted from the economic crisis as well as keep the investment world engaged in trading with blinders on. With the propaganda going into overdrive, we must cut through the fog and mirrors and gauge the most important threats within the system and determine when they might escalate.

The Federal Reserve Will Continue Tightening

There is a lie circulating in the media that Jerome Powell and the Fed are “heroic” for “going against” past central bank regimes and removing easy money policies. This is the exact opposite of what is really happening. We have to remember that it was the Fed and other central banks that created the initial crash in 2008 through easy money policies. They then deliberately created an even bigger bubble (the “everything bubble”) through more monetary stimulus; a bubble so large that it would collapse the entire U.S. economy including bond markets and the dollar if it ever burst.

This circular process of crisis-stimulus-crisis is one that that the central bank has used for over a century. Former Fed officials like Ben Bernanke and Alan Greenspan have openly admitted to central bank culpability for the Great Depression as well as the crash of 2008. Though, as they do this they also assert that they were “not aware at the time” of the greater danger. I don’t buy that for a second.

In almost every instance during which the Fed created a crash environment, banking institutions were able to use the opportunity to snatch up hard assets for pennies on the dollar, as well as steal more political and social power. During the Great Depression, major banks absorbed thousands of smaller local banks as well as all the assets those banks held. In 2008, banks and corporations enjoyed a deluge of easy money paid for by American taxpayers for generations to come, while also vacuuming up hard assets like distressed home mortgages.

An even greater prize for banking elites is global centralization of economic authority, which is what I believe their goal is as the next engineered crash runs its course. As crisis leads to catastrophe, it will be institutions driven by globalism like the International Monetary Fund (IMF) and Bank for International Settlements (BIS) that step in to “save the day”.

As I have noted time and time again, Jerome Powell is well aware of what will happen as the Fed tightens. He is recorded in the Fed minutes of October 2012 discussing the consequences, including his hint of an impending crash if the Fed shut down stimulus measures, raised interest rates and cut the balance sheet.

Yet, Powell continues tightening all the same, indicating that Fed actions and the results are quite deliberate. Recent statements by Powell have been wrongly interpreted by the mainstream to indicate that the Fed might back off of tightening policies. I predict that this will not happen, at least not until the crash has already run its course.

I expect Powell to continue balance sheet cuts at around $50 billion per month through the rest of 2019. I also hold to my original prediction last year that the Fed will hike interest rates in 2019, at least two more times, with a hike in March.

Stock Markets Will Continue to Plunge

Many alternative economists have been pointing out over the years the direct correlation between the Fed balance sheet and stock market prices. As the Fed bought up assets, the stock market rose exactly in tandem. Now, as the Fed dumps assets, stocks are falling with increasing speed and volatility.

The recent pause in the plunge is most likely due to end of the year investment by corporate pension funds, searching desperately for yield in an environment where bonds are no longer viable or safe. This pause will end as the Fed resumes its asset dumps again this month. It is likely that this will produce a monthly cycle of stock purges followed by a moderate bounce each time the Fed is not cutting from the balance sheet.

The Fed’s comments on market accommodation are, in my view, completely fraudulent. Because the central bank has cut stimulus and raised interest rates to the point that corporations can no longer afford massive buyback binges, there is nothing left to support stocks except disinformation and blind faith.

This is a controlled demolition of the economy and markets. The Fed will jawbone as much as possible to keep the system from imploding too fast, because jawboning is the only tool that is left. In the meantime, Powell will keep cutting assets and raising interest rates on schedule. This will inevitably translate into lower prices in equities as the system is “steam valved” down. Blind faith by investors will only go so far. They will be left holding the bag, right along with pensions.

Stocks will resume their steep decline through 2019, and will fall well below support levels seen in 2017. If December’s decline was any indication, as long as the Fed continues its current rate of balance sheet cuts, I see the Dow in the 17,000 to 18,000 point range by the end of March.

Trump Will Get The Blame For The Crash

Trump’s incessant propensity for taking credit for the bull rally in stocks makes him a perfect scapegoat for the ongoing crash. The acceleration in 2019 will be followed by numerous distractions. While Trump has blamed the Federal Reserve for recent stock instability, he has at the same time blamed his own trade war. Trump has attached the success of his presidency to the success of a stock market that he used to call a “big bubble” created by the Fed.

Trump’s trade war along with the government shutdown are just two factors that are already being targeted by the mainstream media and globalist commentators as the causes of the December plunge in equities.

The shutdown might not continue through January if Trump starts building the southern border wall, making the budget debate rather moot. That said, I suspect it may continue anyway; this time does feel different. The timing of the current shutdown makes it such a useful distraction away from central bank actions that I would be surprised if it was ended in the near term. Also, if it remains until February, the threat of delays on EBT and government welfare would be a very juicy crisis that could be exploited by banks and those driven by globalism.

I predict the trade war will continue through 2019, as it has for the past year. Trump will announce “huge” progress on negotiations with China at times in order to jawbone stocks up, but days or weeks later this progress will once again come into question. I realize this is an easy prediction. The trade war farce has followed a rather predictable pattern lately.

Trump has been extraordinarily helpful to the banking elites in this regard. In fact, the Trump Administration adds a new escalation in the trade war a week after every major Fed balance sheet cut or rate hike; just in time for stocks to drop violently due to the Fed cut.

The only way I can see the trade war ending is if another distraction arrives to take its place.

To summarize, the crash of the “everything bubble” has been initiated by central bankers. The worst is yet to come in 2019. Trump has made himself a sacrificial goat for the banking elites, and his administration will be taking the blame by the end of this year regardless of the facts surrounding the Federal Reserve’s program of controlled demolition.