Home » Blog » The Fed is Trapped, How Will Gold React?

The Fed is Trapped, How Will Gold React?

After saying for months that they’d raise interest rates in June, the Fed has decided to keep them as is, leaving the markets confused. 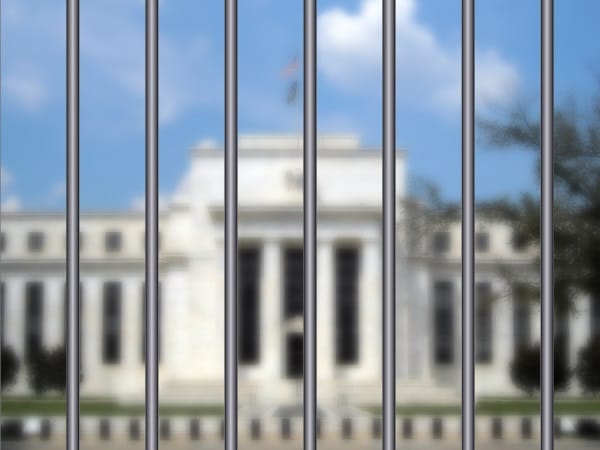 The Federal Reserve on Wednesday announced that it will not be raising interest rates this month.

As per usual, they made the usual excuses. Highlighted this time was the abysmal payroll numbers for May, in which a mere 38,000 jobs were created, well short of the 162,000 expected.

Who knows what the next reason will be…

Potential excuses to be used by the Fed next time may include fallout from the Brexit (if the “Leave” vote wins on June 23rd), Apple taking a hit with China unexpectedly banning sales of the iPhone 6, or even that the country is now dumping U.S. stocks.

It’s difficult for even the most optimistic of us to see where economic growth is going to come from. Wherever you look around the world, there are potential black swans waiting to create the next Lehmann Brothers moment.

How much longer does the Fed think they can keep this game up?

While the Fed maintains that they will raise rates twice more in 2016, the market may dictate otherwise.

In the announcement on Wednesday, the Fed further downgraded the previously stated four rate hikes anticipated for 2017 and 2018, to now only three rate hikes in each year, respectively.

What’s to say that if the economy keeps going south — as the recent jobs numbers report showed — that the Fed won’t yet again revise down their plans?

The smart money sees the writing on the wall and is openly getting out of stocks and into gold. For example, George Soros has recently started to dump some of his stocks and shift money into assets related to gold.

While we certainly don’t know for sure where prices will go from here, it’s crystal clear that the Federal Reserve (along with other central banks around the world) have no solutions left other than to take rates into negative territory and throw increasing amounts of money into the market.

This is not a sustainable, long-term plan.

In fact, they’ve actually made the situation worse by helping to artificially prop up the markets, thus throwing fuel on the fire.

This is why the case for gold, as a means to diversify and protect your savings, remains strong.

Don’t wait any longer to move into gold. Give us a call. We are here to answer all of your precious metals questions and help you get started.

Could the Fed just be maintaining the illusion that they will raise rates? Find out here.