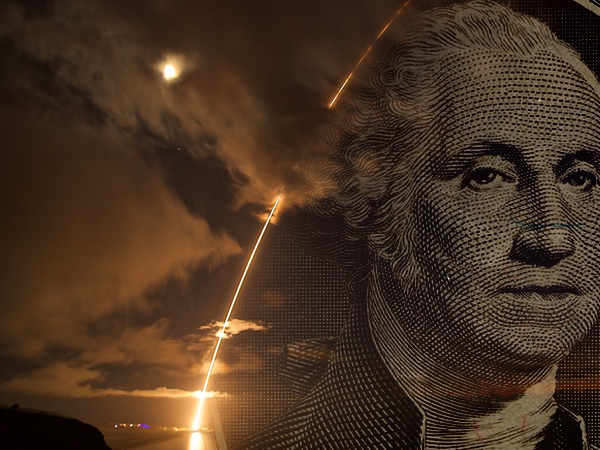 Photo by Defense.gov | CC BY | Photoshopped

In recent years, as the government has run annual deficits nearing $1 trillion, they’ve continued to hit the debt ceiling, which is supposed to keep spending in line. But each time, Congress has voted to raise the ceiling so they could continue paying obligations.

These actions are not without controversy, and you’re about to read one reason why…

The recent pandemic and the resulting lockdowns have added a new dimension to this year’s federal deficit. Uncle Sam has had to go on a spending binge to keep things afloat. But nothing like the “spending binges” of the past few years.

Buckle up, because the trend for this year’s deficit appears to be disturbing no matter how you look at it.

Part of it is illustrated in the line graph from the Bipartisan Policy Center, which reported the growing deficit through May 2020: 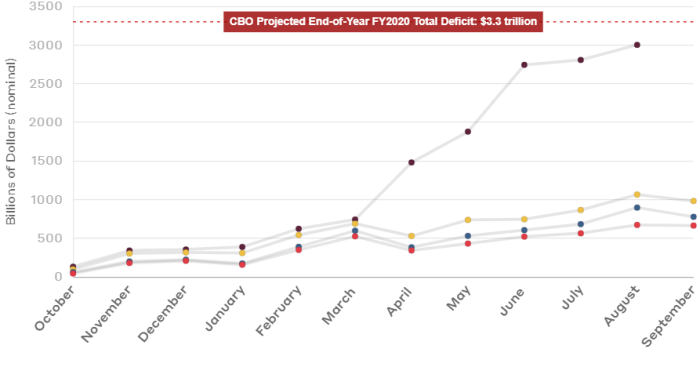 The total deficit projected on the chart above is an incredible $3.7 trillion for fiscal year 2020. The entire deficit for FY2019 was $984 billion. So if the projected deficit for this year becomes reality, it would represent a 276% increase over 2019’s deficit.

The chart above also reveals that even if the fiscal year were to have ended in May 2020, the deficit would still have totaled a staggering $1.88 trillion.

But the U.S. still has three more months of spending to go, and June’s monthly budget review from the Congressional Budget Office just came out.

It doesn’t help paint a better picture, either.

U.S. Deficit for June Comes in Higher Than All of FY2018

According to an article on ZeroHedge, in June alone, “the U.S. spent a record $1.105 trillion, an increase of $763 billion from last year.”

That would be reasonable if the U.S. also had the receipts to account for the massive increase in spending. But sadly, that isn’t the case.

In the CBO’s latest budget review, it shows the Federal Government only took in $242 billion for June. That leaves a deficit of $863 billion in one month.

That’s more than 100 times larger than the $8 billion deficit in June 2019. You can see the devastating picture reflected on ZeroHedge’s chart below: 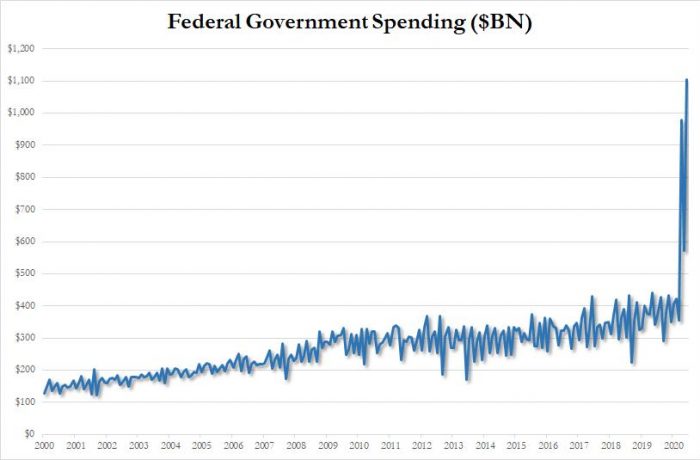 This insane spending gets even more interesting when you factor the total budget deficit for 2018 was only $779 billion. That’s right: Uncle Sam spent more in one month than an entire fiscal year.

The ZeroHedge article finishes with the following thought: “At some point the market will realize that this insanity is simply unsustainable.”

While They Spend Endlessly You Should Get Prepared

In 1966, Alan Greenspan said: “Deficit spending is simply a scheme for the confiscation of wealth. Gold stands in the way of this insidious process. It stands as a protector of property rights.”

Over 50 years later, that statement rings just as true.

Are your savings protected from endless government spending?