The threat a rotten “Apple” poses to U.S. stocks

With a lackluster iPhone release, Apple continues its recent losing streak. Is there any truth to speculation that the company’s decline could hurt the rest of the stock market? 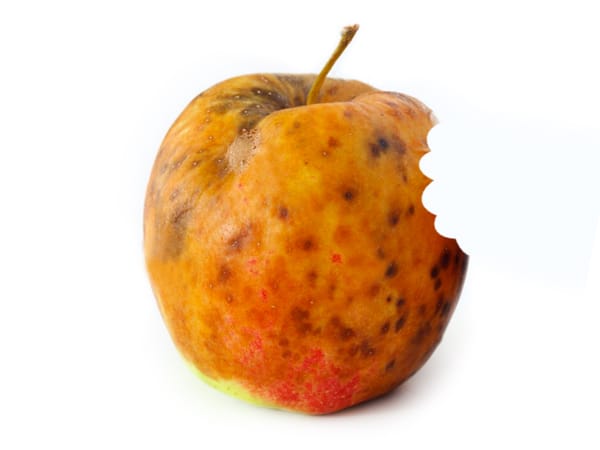 Ever since innovative genius Steve Jobs left us, it seems as though Apple has lost its shine.

The product announcements made by Apple CEO Tim Cook earlier this week were anything but spectacular, and the “new” iPhone features presented were nothing breakthrough. In fact, they will not even bring the iPhone up to par with it’s main rival, the Samsung Galaxy S6.

Rather than leading the way, it seems as though Apple is out of ideas and has resorted to copying its competition.

Have we reached “peak Apple”?

Ever since the launch of the first iPhone in June 2007, Apple has outperformed the stock market before and after product launches. With this launch, however, investors are cashing out, with its stock down 6.6% in the last 30 days.

And with most of Apple’s new products being complete flops, it’s unlikely there will be any major upsurge in Apple products any time soon.

As the brand and product premium seems to have worn out, so will Apple’s ability to pull in the same revenue that they have in the past.

At this point of the article, you may be asking yourself: What does this mean to me?

The fact is that Apple’s decline will have a bigger effect on the market than most people realize.

If Apple falls from the S&P tree, will the market follow?

Were Isaac Newton alive today, I’m sure we could get a scientific explanation. But since he’s not, here’s the economic explanation.

Even though Apple is just one company that makes up the S&P, past history shows that if even just it goes rotten, it can spoil the barrel. Just look at what has happened with the likes of Bear Stearns, Lehman Brothers and Enron.
Here are some things you need to know about Apple’s huge effect on the market and economy:

That’s how big Apple is!

With today’s markets akin to a dry powder keg waiting for a spark – where even a small rate rise could bring down global equity markets – imagine the awful consequences of a falling Apple stock price.

We’ve already warned you about the danger of being in stocks today. Now, this is just one more reason to ensure you’re diversified into other assets – and especially tangible assets such as gold.

There is, however, one way you can move into gold and support Apple (and by extension, the U.S. economy?) – with this iPhone made from gold.

If you want your gold iPhone, you can give retailer Brikk a call. But if you want to move your plain, old-fashioned, been-around-for-thousands-of-years gold, you can call us here. We’re ready to help.