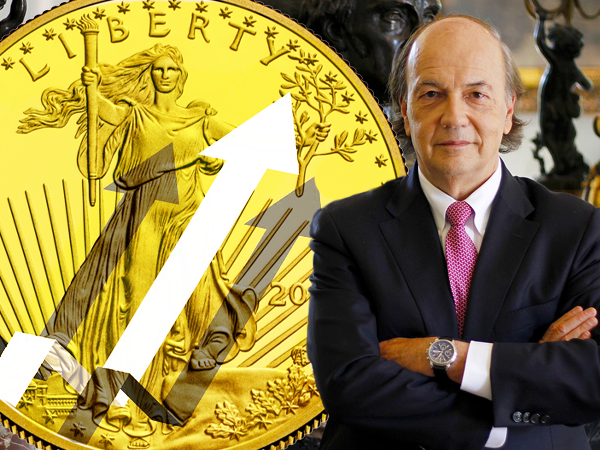 Over the past couple of weeks, precious metals prices have been pulling back from their recent highs. For anyone taking a short-term view, it’s not a positive development. But appearances are sometimes much different from reality – especially once you allow a little bit of time to pass.

During those two bull runs, the price of gold shot up 2,100% and 650%, respectively. You can see both reflected below:

You can also see how gold’s price dropped near the start of the 2008-09 financial crisis, but then began shooting up like a rocket about halfway through.

Finally, you can see on the chart where the end of 2015 represents the most-recent “bottom” price for gold. This leaves us with the question…

Where Could Gold’s Price Go From Here?

According to Jim Rickards, when you average out the previous two bull runs, that bottom in 2015 is where the next decade-long bull run for gold could start:

Of course, Rickards notes that the sample size is small, and to take this prediction with a grain of salt.

But gold’s price could also follow the script from 2008-2011, when dropped initially but then rose sharply.

Let’s zoom in on that part of the chart above: 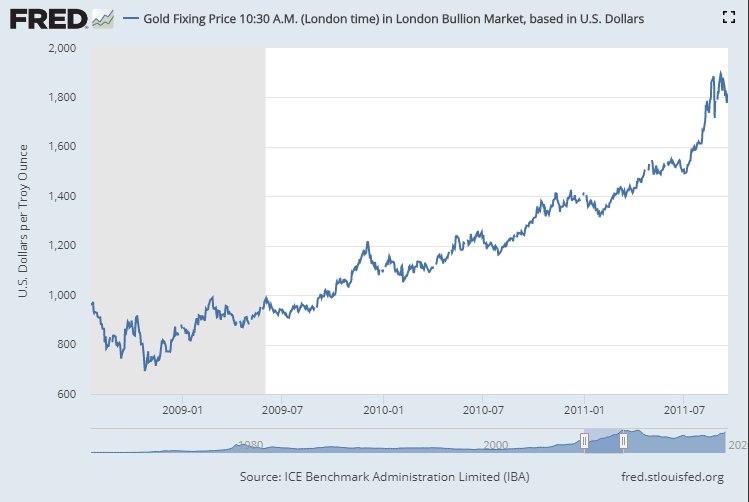 A recap article from Kitco explained why prices staged this rally:

In an October 2009 research note from Dundee Precious Metals, there were several reasons why gold prices were expected to go up in the coming years, including fiscal and monetary reflation, investment demand, the bullish price cycle in gold and geopolitical worries.

Jim Rickards explained why he thinks that happened, and why it could happen again in the near future:

If weak hands are selling, won’t the strong hands jump in to buy? The answer is yes, but not right away. The strong hands see what’s going on and are prepared to buy, but not until the last distressed party has closed out his last gold futures contract. Then the strong hands pounce like a lynx looking for breakfast. That’s when the price of gold soars and the bull market in gold gets back on track.

Rickards also explained gold’s recent drop in price, claiming it is “not unusual”:

When viewed against the background of a global pandemic from coronavirus, some of the worst single-day drops in stock prices in history, a spreading liquidity crisis and a potential worldwide recession… a decline in the price of gold is not only not unusual, but entirely to be expected.

So once you consider that the Dow has been whipsawing for the last three weeks, the recent decline in gold’s price may not last long.

That, and the “strong hands” that Rickards references may already be making a move towards physical gold.

The Demand for Physical Gold and Silver is Increasing

According to Kitco, silver sales are skyrocketing: “Data from the U.S. Mint shows that it has sold 2.32 million one-ounce silver coins so far this month, up significantly from February sales of 650,000 coins.”

And based on wholesale cost over spot price for 1 oz bullion American Eagles, premiums for physical products are soaring higher. Gold is selling at about a 6% premium and silver is selling at an 86% premium. Both of these figures are well over their averages from earlier in the year. 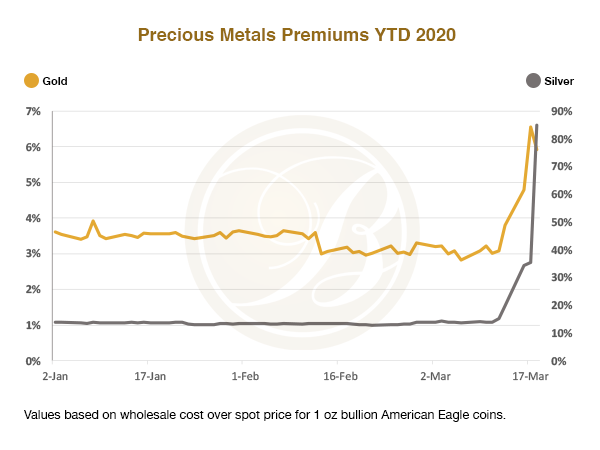 So even as the spot price of precious metals has dipped in recent weeks, demand for physical products has been skyrocketing.

Brandon Smith of Alt-Market.com argues, “Crash conditions will likely inspire more and more people to demand physical delivery on precious metals over the course of 2020, as fears of paper market shutdowns due to the pandemic grow.”

If that comes to fruition, we may likely see a complete decoupling of paper and physical gold prices.

Now is the Time

Having a diversified portfolio with assets known for their protection during uncertain times is a strategic way to diversify your retirement.

Holding assets such as physical gold and silver could prevent your retirement savings from suffering the consequences of being overexposed to equities.